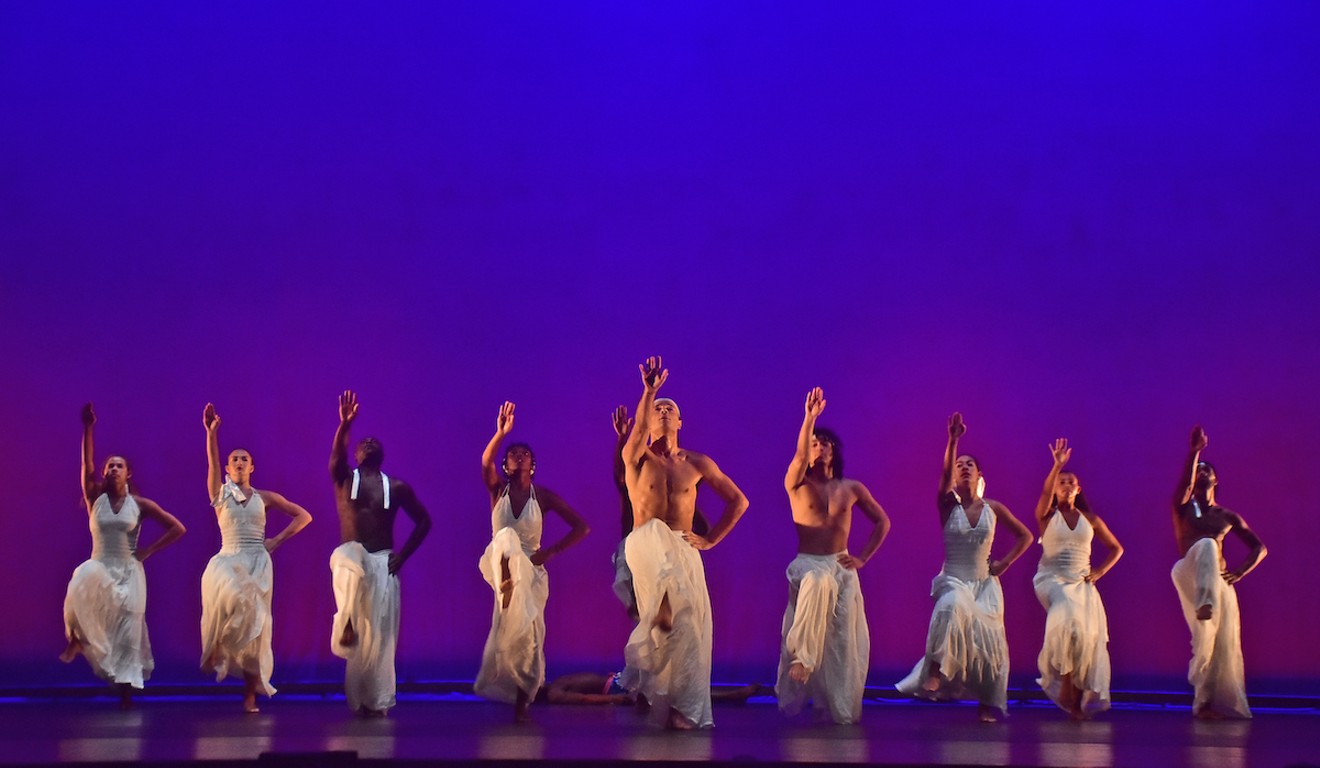 When restrictions eased, London took his dancers to the beach.

"It was great being out in the open and in the fresh air," London says, "and we performed the dance right when the sun was rising."

London conceived the opening of "La danse vie" as a ritual to the sun.

The choreographer calls the first movement "Kalinda Wash." Performed by nine dancers and set to the percussion-rich composition "D Train to Prospect Park" by Palms Down, "Kalinda" is a Sanskrit word that refers to health and replenishment.

A native of Trinidad and Tobago, London drew inspiration for the second movement, "King Carnival," from the Trinidadian Carnival.

"In Trinidad, during the Carnival season, it's like the Carnival comes alive at 4 a.m.," says London. "The second movement is an all-male quartet of solos and group sections and is fiery and vibrant and intense." 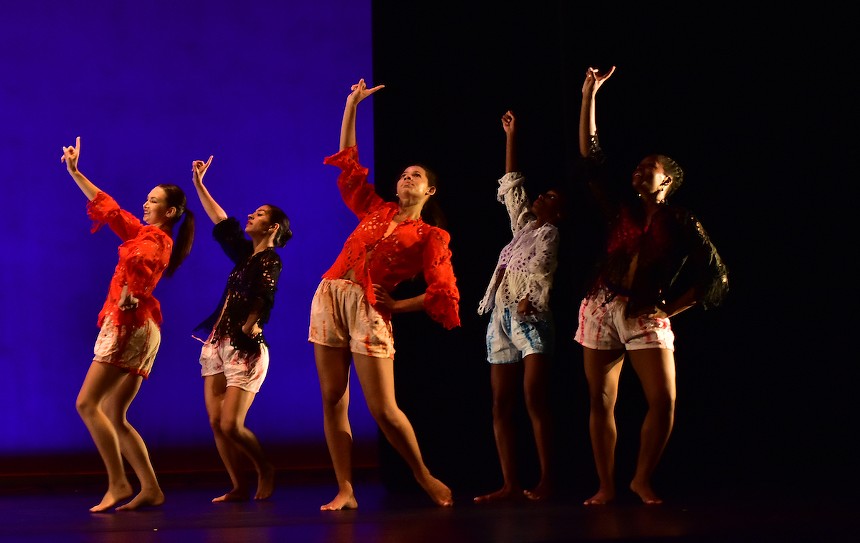 "That's when all the big masquerades come out, and everyone drinks and eats," London says. "All hell breaks loose. It's a physical and spiritual explosion."

London turned again to Charles to capture Carnival's spirit. The result is music that not only exudes explosive energy but also tells a history of creative musical resistance on the part of Trinidadian slaves.

"If caught playing the drums, one could have one's hand cut off since the drum made a code language that the plantation owners tried to subvert," explains London. "When the plantation owners banned the slaves from using drums, we picked bamboo, and we cut it at different lengths and sizes, and that's what we used to play the rhythms. The music makes you want to jump to your feet and dance in the theater."

A dance professor at New World School of the Arts since the early 1990s, London says many of the company's dancers and choreographers are former students. Some of his dancers started with him even younger at the Pinecrest dance studio, Dance Empire.

Dancer and choreographer Justin Rapaport, one of London's former students, will premiere the duet, "Around, Would You Turn."

Rapaport began training with London at Dance Empire when he was 8 years old. He followed London to the New World of the Arts before being accepted to the Juilliard School. In 2016, he joined the Vancouver-based company Ballet BC. It was a piece created as part of Ballet BC's choreographic workshop, Take Form, that won him the Danish Dance Theater Award at the Copenhagen International Choreographic Competition in 2021. In 2022, he decided to strike out on his own.

"Our relationship has grown throughout the years, from teacher-student to mentor-mentee and now to artistic collaborators and, better yet, friends," says Rapaport when asked about training with London. 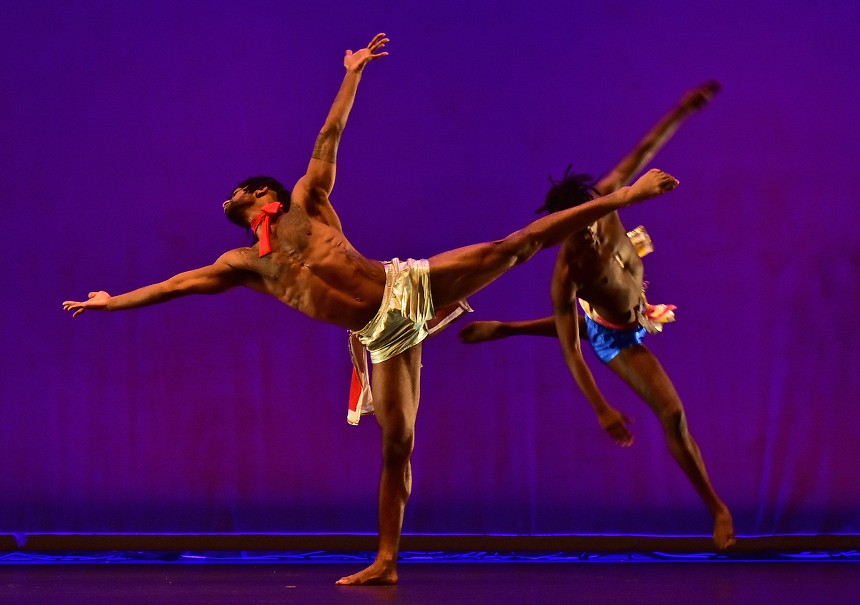 The work grew out of Rapaport's reflections on the idea of individual progress.

"No matter how much we may change, we return to a place where we have been before," says Rapaport. "Circumstances might be different: new people, new environment, new sense of self, and, yet, there is a sense of return and familiarity."

Also on the December program is "Embers" by choreographer Terry Springer. PLGDC dancers Macey Rowan and Clinton Harris (December 28 and 30) and Brilley Rowan and Leon Cobb (December 29 and 31) set to the music of Woodkid, Ambrose Williams, and Jonatan Szer.

"Embers" addresses the theme of returning to life during the pandemic, which, for Springer, occurred like embers reviving into flame.

The program also includes Haitian-American choreographer Vitolio Jeune's "I Am My Brother's Keeper," a duet danced by Harris and Cobb (December 28 and 30) and Jean-Baptiste and Cobb (December 29 and 31). The work dramatizes the complicated but loving relationship Jeune had with his brother, he says.

Now in her second season with PLGDC, dancer Eden Collier first met London as a dance student at New World, though she began dancing at age 3.

Collier — who dances in most of the program — identifies strongly with London's "Eye of Zimbabwe." In this piece, Collier shares solos with Harris, Cobb, and Tt'Shaylah Lightbourn.

"['Eye of Zimbabwe'] reminds me that I'm not alone," says Collier, "and to remember to have gratitude for all that they've given me."

"A lot of times we talk about racial trauma, but oftentimes we forget to talk about the blessings that our ancestors passed down to us," she says.

The first act closes with "And So I Run," choreographed by Kashia Kancey, a former London student from New World who grew up in Miami's Overtown. Kancey's new work reflects on the death of George Floyd, an African-American man killed in police custody in Minneapolis in 2020.

"Black folks many times run from the police and run for their lives," says London about Kancey's piece. "And so, the whole time you're living, you have to run."

"The energy of the dancers [in 'And So I Run'] is breathtaking, and sometimes it is painful to watch," London says. "We've been running for 500 years. Running is part of the experience of being free and trying to stay alive. And with all that running, a lot of creativity happens."

Peter London Global Dance Company's Ancestral Ground. 7:30 p.m., Wednesday, December 28 through Friday, December 30; and 2 p.m., Saturday, December 31, at the Adrienne Arsht Center of the Performing Arts, 1300 Biscayne Blvd., Miami; 305-949-6722; arshtcenter.org. Tickets cost $53.
KEEP MIAMI NEW TIMES FREE... Since we started Miami New Times, it has been defined as the free, independent voice of Miami, and we'd like to keep it that way. With local media under siege, it's more important than ever for us to rally support behind funding our local journalism. You can help by participating in our "I Support" program, allowing us to keep offering readers access to our incisive coverage of local news, food and culture with no paywalls.
Make a one-time donation today for as little as $1.
ArtburstMiami.com is a nonprofit source of theater, dance, visual arts, music, and performing arts news.