Where will you celebrate National Doughnut Day? The Salty Donut
This weekend, take advantage of National Doughnut Day specials at shops across Miami-Dade. Plus, Night Owl Cookies and Coyo Taco launch a limited-edition churro cookie, and Mama Tried celebrates its first anniversary with an open bar.

Flan and doughnut had a baby.
Mojo Donuts
National Doughnut Day Deals in Miami. National Doughnut Day is back, and Miami is ready to celebrate. From the Salty Donut's limited-edition blueberry-and-passionfruit creation to Mojo Donuts' Flantastic treat to freebies at Honeybee Doughnuts, there will be parties, complimentary samples, and limited-edition flavors at doughnut shops all over Miami-Dade. Here are the best deals to look for this Friday. 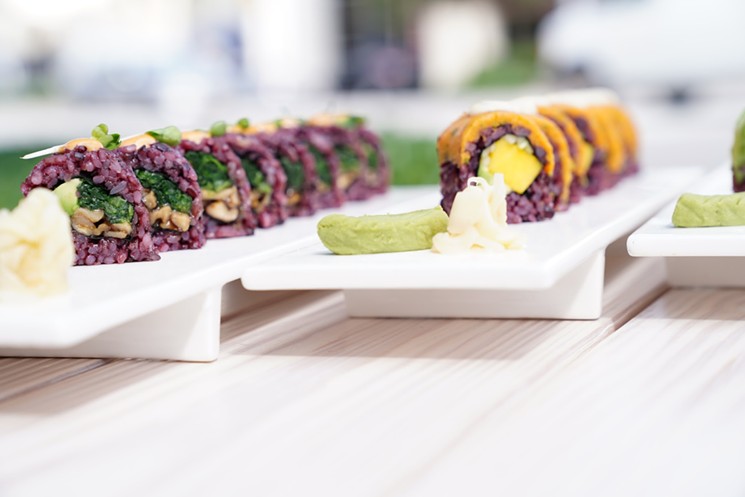 Sushi Maki's new kenko rolls.
Sushi Maki
Local Miami Food Suppliers at Whole Foods Market Dadeland. Saturday and Sunday, Whole Foods Market Dadeland will round up some of Miami's best local food suppliers for a two-day pop-up. Meet the owners and artisans of Skinny Latina, Aramouni International, Jammy Yummy, Shanti Bar, Dr Smood, Apura Farms, and others. Plus, expect a sushi-rolling demonstration from Sushi Maki, pop-up carts with eats from Adam's Ranch and Key's Fisheries, and tap takeovers courtesy of El Bocadillo and Veza Sur. Saturday, June 8, and Sunday, June 9, at Whole Foods Market Dadeland, 7930 SW 104th St., Miami; 305-969-5800; wholefoodsmarket.com.
KEEP MIAMI NEW TIMES FREE... Since we started Miami New Times, it has been defined as the free, independent voice of Miami, and we'd like to keep it that way. With local media under siege, it's more important than ever for us to rally support behind funding our local journalism. You can help by participating in our "I Support" program, allowing us to keep offering readers access to our incisive coverage of local news, food and culture with no paywalls.
Make a one-time donation today for as little as $1.