New York City-based Avra Estiatorio will open an oceanfront space at the Acqualina Resort & Residences in Sunny Isles. Rendering courtesy of ArX Solutions
Avra Estiatorio, an upscale Greek restaurant with two locations in Manhattan and one in Beverly Hills, has announced that it will expand to South Florida late this year.

The new Avra Miami is being touted as the cornerstone of the latest addition to the Acqualina Resort & Residences, a swanky resort and gated community in Sunny Isles Beach. The spacious, custom-designed restaurant is to be located inside Villa Acqualina, a new Mediterranean-inspired villa that will serve as the entertainment hub for the property's private gated community of 248 residences, known as the Estates.

The Acqualina was founded in 2006 by developers Eddie and Jules Trump (no relation to a certain other Trump family). Together, the duo has developed several successful top-end properties, including Williams Island in Aventura and a luxury condominium complex in Boca Raton, as well as extensive land holdings and developments in California. The Trumps are expanding their reach by pairing their projects with well-known culinary and artistic talent, including New York City-based Avra Group.

Avra Group co-owners Nick Tsoulos and Nick Pashalis opened the original Avra Estiatorio in 2000 off East 48th Street in Manhattan. Today, the wildly popular estiatorio — which takes its name from the Greek word for an elaborate and upmarket establishment — is best known for a menu that focuses on Mediterranean-sourced seafood and traditional platter-style entrées made with imported ingredients.

The Avra Miami is slated to launch alongside the new Villa Acqualina in late December or early January 2022. 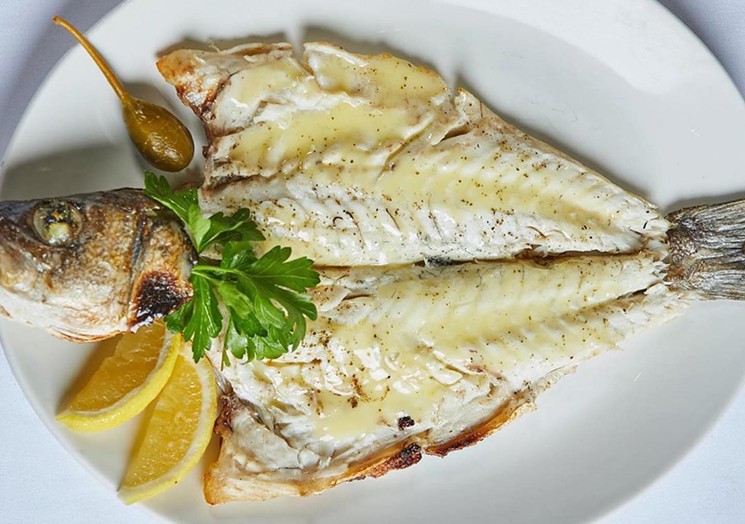 At Avra, fresh-caught fish is flown in daily from across the Mediterranean, then prepared simply over a charcoal fire.
Photo courtesy of the Avra Group
The Avra Group originally considered spaces in Brickell before inking a deal with the Trump Group.

"We began negotiations before the pandemic, before there was a gold rush to come to Miami to open restaurants," Tsoulos tells New Times. "It wasn't something we were really serious about until we got the call from the owners and developers of Acqualina. They're building something really special there, and the space is truly unique."

According to Tsoulos, the group's new South Florida location will be the most luxurious Avra establishment to date. "There's not a lot of spaces in the Miami Beach area like this, and ultimately that is what enticed us to make the deal and come to Miami," Tsoulos says.

When completed, large indoor and outdoor dining areas will overlook the property's beachfront infinity pool and the Atlantic Ocean beyond. Designed by the STA Architectural Group, the 10,000-square-foot space will take advantage of the views with 28-foot ceilings and floor-to-ceiling windows.

As with other Avra establishments, the kitchen's bounty of raw seafood — delivered daily from fishermen in Greece, Spain, Portugal, Italy, and New Zealand — will be displayed on a massive ice bar. At least a dozen line-caught fish will be available by the pound at market price each day. Cooked over charcoal, selections will be prepared simply with olive oil, lemon, and caperberries and range from Mediterranean-sourced barbounia (red mullet) and lavraki (European bass) to branzino.

Likewise, the full Avra menu features a number of high-end dishes. The long list of appetizers ranges from a trio of classic spreads like tzatziki, fava, and melintzanosalata ($27) and spanakopita ($21) to a Chilean sea bass souvlaki ($28) and octopus carpaccio ($30). Main plates feature filet mignon and lamb chops ($36 to $59). Diners can also indulge in the house olive oil, a full-bodied selection bottled exclusively for the restaurant that's served with every dish and comes from olives in Greece that are handpicked from ancient groves and pressed within three hours of harvest.

"It's like the Mediterranean diet, but only the freshest fish available," Tsoulos says. "That is what makes Avra special."

Avra Estiatorio Miami at the Estates at Acqualina. 17895 Collins Ave., Sunny Isles Beach; 305-933-6666; estatesatacqualina.com.
KEEP MIAMI NEW TIMES FREE... Since we started Miami New Times, it has been defined as the free, independent voice of Miami, and we'd like to keep it that way. With local media under siege, it's more important than ever for us to rally support behind funding our local journalism. You can help by participating in our "I Support" program, allowing us to keep offering readers access to our incisive coverage of local news, food and culture with no paywalls.
Make a one-time donation today for as little as $1.