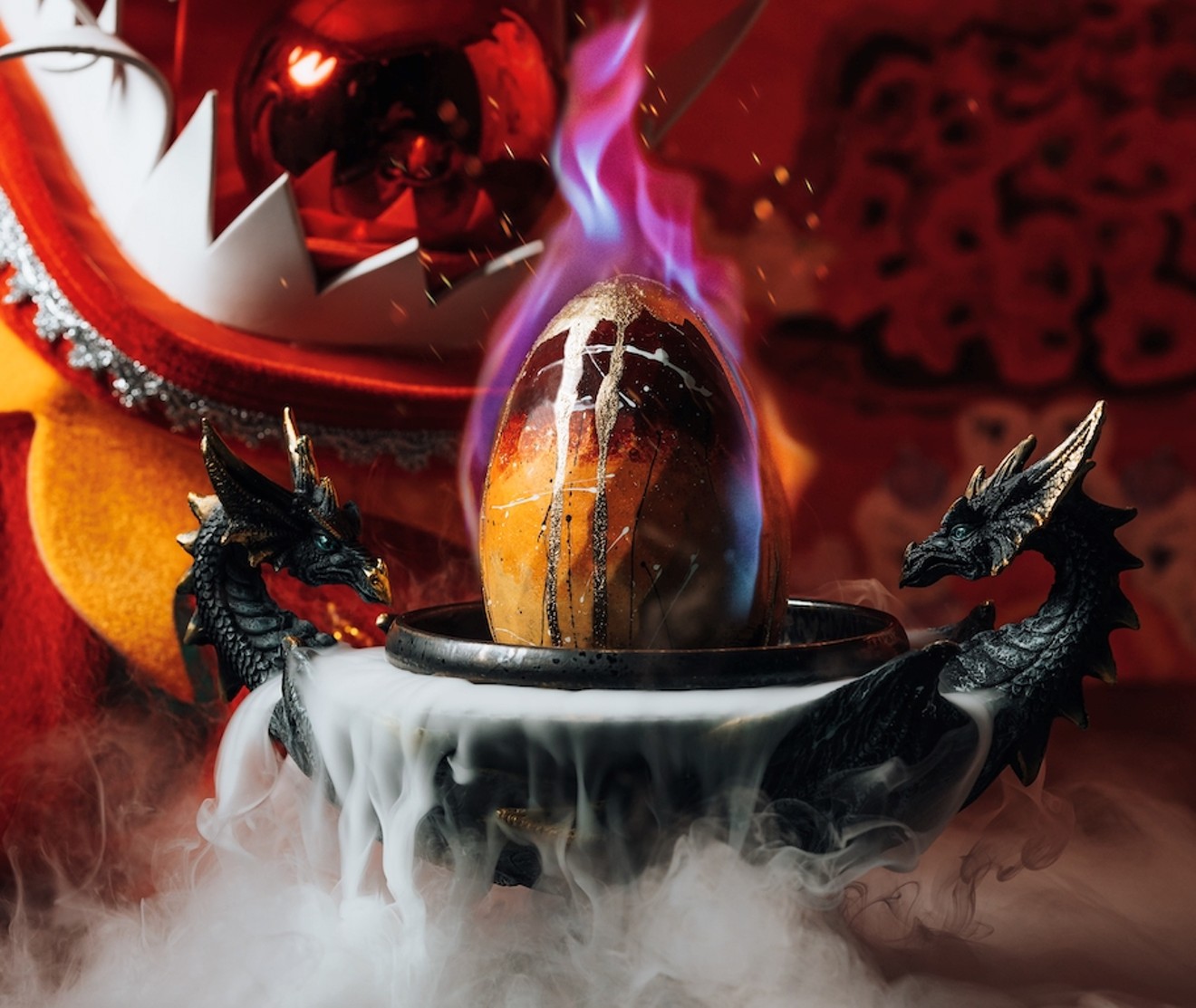 The "Fire & Ice" at Komodo (the one you can actually eat). Photo courtesy of Groot Hospitality
Miami Tech Week and the Miami Bitcoin Conference are filling our city with tech bros and crypto investors.

Usually, the only involvement a restaurant would have in a week such as this would be to possibly offer a signature cocktail — anyone up for a "TechTini" or perhaps a little "Hair of the Doge" after a long night?

Groot Hospitality, in partnership with the NFT company Bubblehouse, has created an NFT dessert called "Fire & Ice." The NFT is limited to 300, at $100 a pop.

What, you might well ask, is an NFT dessert? It's a dessert that lives on the blockchain. So, in this case, NFT stands for "Not for Tasting."

New TImes got a preview of the NFT and, well, it's kinda cool: a 15-second digital clip shows a gilded Chinese dragon swooping down onto the sands of South Beach and blowing flames at a golden egg engraved with the word "Komodo".

The clip, according to a Groot representative, was not created by a famous artist and the money doesn't benefit a charity. But there is one key benefit to owning the NFT: Holders get the opportunity to purchase a real dessert at Groot Hospitality's Brickell restaurant, Komodo.

You know, the analog kind you can eat.

The "Fire & Ice" dessert starts with a dark-chocolate egg, coated in an ombré fade of red, gold, orange and black. The egg is presented on a dragon-shaped platter and then "cracked" by having flaming 151-proof rum drizzled on it. The flame is then doused with caramel-passionfruit sauce, exposing an interior filled with coconut meringue, chocolate crunch, and cake. The dessert sounds amazing and costs a "Miami-reasonable" $40.

The catch: To order the dessert, you have to purchase the NFT.

"A big part of what we aim for at Komodo — and all Groot properties — is to create new and highly memorable experiences. By combining the culinary world with Bubblehouse and digital art, we see this dessert-NFT combo as the first step to a near-limitless future. The metaverse is only going to grow, and we're going to be right there with it as it evolves."

Grutman is correct that NFTs are gaining ground in the culinary world. Earlier this month in partnership with King Plebs, the Tank Brewing Co. released a double IPA called Pleb Nectar, accessible via a beer-centric NFT that unlocks limited-edition beers at participating breweries. The NFT costs 0.05 Ethereum (ETH) —about $160 when last we checked — and includes discounts at participating brewery partners.

The Komodo "Fire & Ice" NFT. Debuts today, Thursday, April 7, and can be purchased via Bubblehouse with Apple Pay.
KEEP MIAMI NEW TIMES FREE... Since we started Miami New Times, it has been defined as the free, independent voice of Miami, and we'd like to keep it that way. With local media under siege, it's more important than ever for us to rally support behind funding our local journalism. You can help by participating in our "I Support" program, allowing us to keep offering readers access to our incisive coverage of local news, food and culture with no paywalls.
Make a one-time donation today for as little as $1.