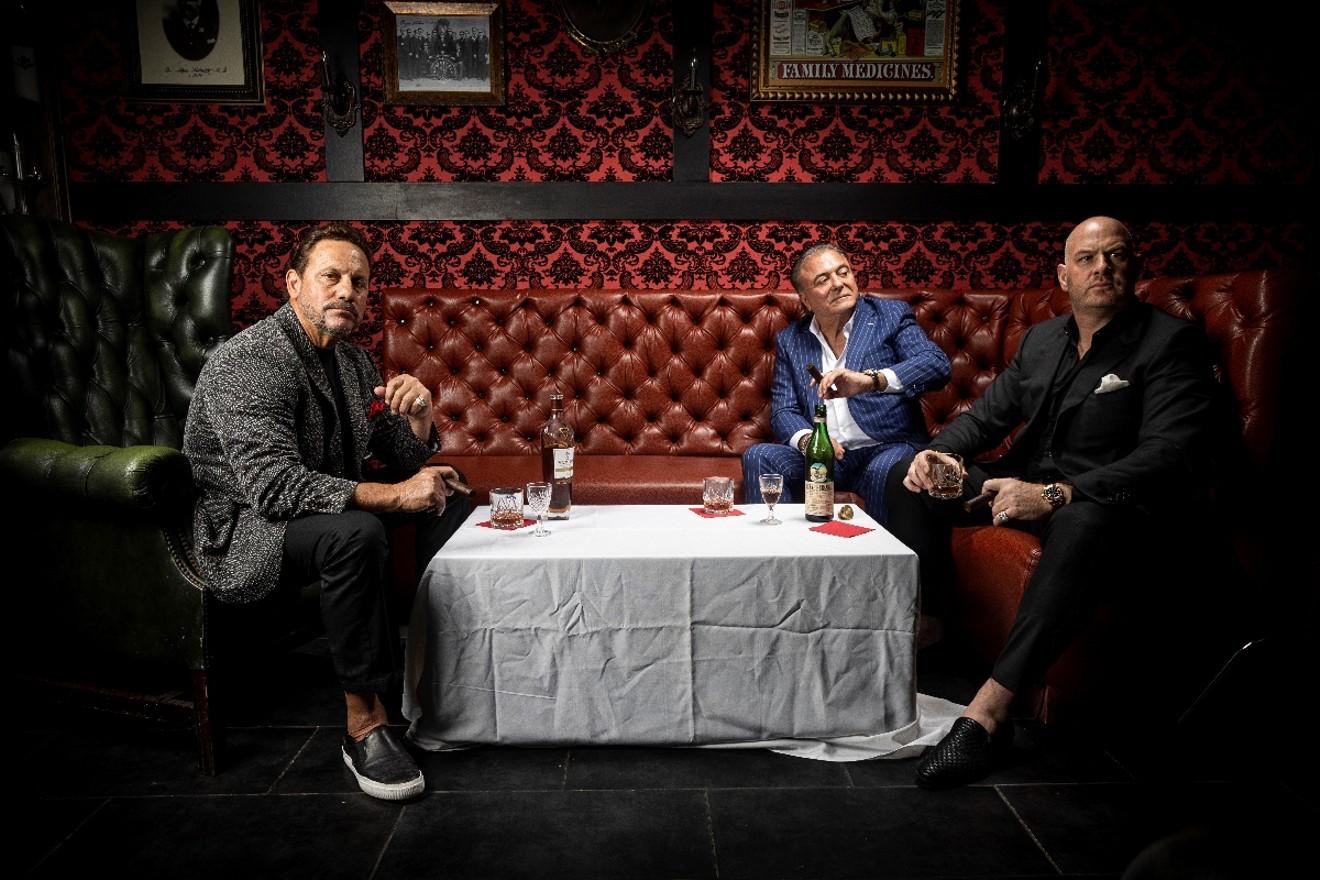 Anthony's Runway 84 partners (from left) Anthony Bruno, Pat Marzano, and Marc Falsetto. Anthony's Runway 84 photo
When Ray Liotta died last May, he left a formidable library of work, but one scene from one movie will forever be etched in our collective memories (and studied in countless acting and directorial classes): Liotta, as Goodfellas' Henry Hill leading his date Karen (Lorraine Bracco) through the kitchen of the Copacabana nightclub to the main showroom, where a table is magically set for the couple.

Last May, when Anthony's Runway 84 co-owner Anthony Bruno described his vision of what his beloved Fort Lauderdale red sauce restaurant would be, he asked me to envision that scene. "Without giving anything away, that's the feeling we're going for," he said just days before the restaurant would close for its eight-month refurbishment.

Last evening, Anthony's Runway 84 reopened after its renovation, with a new look and a shorter name: Runway 84. The first modernization was at the valet stand. I am notorious for never having cash on me and having to duck inside the Walgreens next door to get money for the valet. This time, I am notified that they now take Venmo.

The next addition to Runway is a mural of famous Italians. Through wrought iron gates marked with a gilded "R", you are greeted by Dean Martin, Sophia Loren, Joe DiMaggio, Frank Sinatra, Lady Gaga, Al Pacino, Madonna, and Jake La Motta. The walls just beyond the hostess stand are filled with pictures of celebrities who have dined at the restaurant over the years, along with a framed document that partner Anthony Bruno points out as his grandmother's ship passage to America, complete with an entry stamp from Ellis Island.

Beyond a neon "supper club" sign, you enter the completely revamped dining room. The space, which seats about 180, is now decorated in rich emerald and ruby tones. The wall between the bar area and dining room has been removed, and a stage has been added for the live entertainment planned for six nights a week. Each table has a small lamp reminiscent of the ones at the Copacabana in the famous Goodfellas scene. Bruno says he and his partners, Pat Marzano (from Bruno's other venture, Anthony’s Coal Fired Pizza) and Marc Falsetto of Handcrafted Hospitality (Tacocraft, Pizzacraft) agreed upon the designs presented by Miami-based Bigtime Design Studios for the renovation.

"We were talking about keeping the food the same and enhancing the atmosphere," says Bruno, who added that his father had run a supper club in Queens, New York, when he was younger. Bruno notes that Runway already had a loyal customer base, but he's hoping to attract new faces to the restaurant. "There's nothing really like this in Fort Lauderdale. If we can keep the customers we have and bring in a few more people, that's our goal."

The partners are also acutely aware that, while they could change the restaurant's design, some aspects of Runway were untouchable after four decades: the food and the service.

Last May, Bruno said that Runway's employees would be retained. Last evening felt like a high school reunion as restaurant regulars greeted their favorite servers and bartenders with handshakes and bear hugs. There was Cindy, the bar manager who's been shaking martinis for 27 years, Vincenzo the maître d' with his slicked-back black hair and glasses that would make Elton John envious; and chef Al Hilarcik, who has been behind the restaurant's red sauce classics for the better part of 40 years.

There are a few new faces added to the crew, like the bartender Frankie. "Call me Frankie on the way... 'cause I'm on the way with your cocktail," he tells me as he places a martini in front of me. 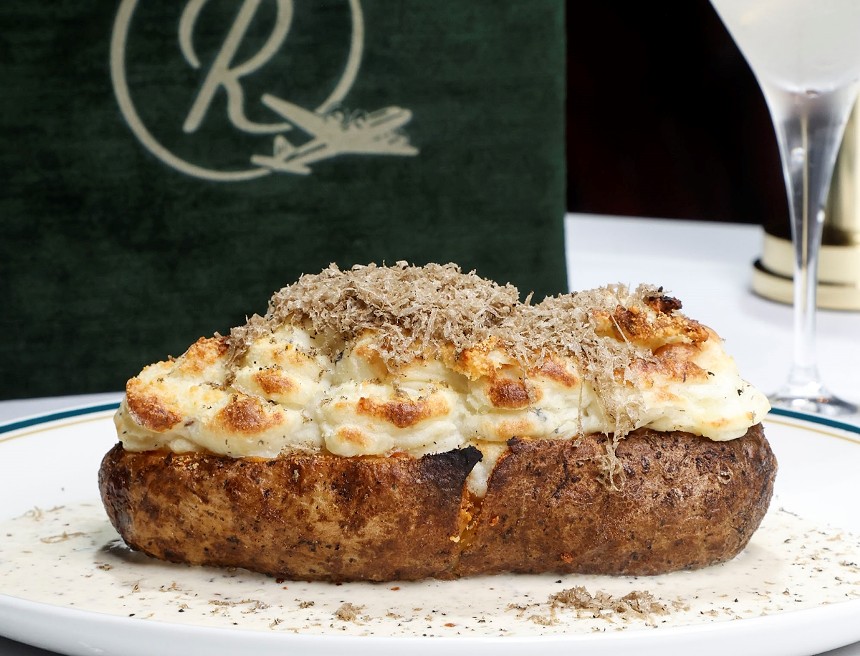 Twice-baked potato at Anthony's Runway 84
Anthony's Runway 84 photo
Looking at the menu, I feel a wave of nostalgia. My favorites, including clams oreganata, chicken parm, and rigatoni cauliflower, are all there, along with a few new items. Partner Marc Falsetto says the team wanted to enhance the menu to reflect the supper-club vibes, so they introduced a selection of prime steaks and chops. "I traveled the country and finally met with Chicago beef guys. We found the same fabricator that does the steaks for Peter Luger in New York. It's a custom program for Runway." Falsetto also points out some more additions like a Caesar salad served tableside, a swordfish dish previously only available as a daily special, and a twice-baked potato topped with shaved truffles and served on a bed of cacio e pepe sauce. "That's the king of the menu," says Falsetto.

My dinner is nothing short of a delicious trip down memory lane, starting with the complimentary bread service, served with a dish of garlic, cheese, and olive oil for dipping. My chicken parm arrives just as I remembered: a cutlet pounded super thin so the edges can get extra crispy, topped with piquant cheese and marinara sauce. The twice-baked potato was a decadent little project: I delighted in scooping out potato filling and dipping it into the cacio e pepe for a custom bite that is creamy and peppery.

As the band offers a rendition of "Fly me to the Moon," I finish my meal and look around. The room is filled with people sipping drinks, eating meatballs, and laughing. There is something in the air — the scent of nostalgia tinged with a top note of newness.

I wait for my check and take a quick selfie. That's when I notice the pictures behind me: a photo of Joe Pesci, Ray Liotta, and Robert DeNiro, looking dapper and young in a scene from Goodfellas, right next to a picture of the Copacabana nightclub.

This new iteration of Runway 84 may be a little more polished than before, and the airplane theme is, for the most part, gone (though there are still some "Hidden Mickeys" if you look hard enough), but what makes this restaurant so loved — its food and the people who make and serve it — are still there for Runway's regulars to come back to and a whole new generation to discover.

Runway 84. 330 W. State Rd. 84, Fort Lauderdale; 954-467-8484; runway-84.com. Tuesday through Saturday 4 to 11 p.m., and Sunday 4 to 10 p.m.
KEEP MIAMI NEW TIMES FREE... Since we started Miami New Times, it has been defined as the free, independent voice of Miami, and we'd like to keep it that way. With local media under siege, it's more important than ever for us to rally support behind funding our local journalism. You can help by participating in our "I Support" program, allowing us to keep offering readers access to our incisive coverage of local news, food and culture with no paywalls.
Make a one-time donation today for as little as $1.