Can We Make It Out of August Without a Major Storm? Please?

Two tropical disturbances are lingering out in the Atlantic, one of which has a high probability of developing into Tropical Storm Danielle. Screenshot via National Oceanic and Atmospheric Administration
We're on the verge of breaking a longtime streak: If all stays reasonably quiet through Wednesday, we'll have experienced our first August in 25 years without a major storm in the Atlantic Ocean.

The last time the Atlantic saw an inactive August was 1997. Since then, the start of the school year has been marked by at least one storm strong enough to earn a name (i.e., one with winds that reach at least 39 mph).

While we appear to be on the brink of breaking that 24-year run, meteorologists are monitoring two tropical disturbances in the Atlantic that may rain on the record parade. One is forming just off the coast of Senegal in West Africa, while the other is organizing closer to the Americas, east of the Lesser Antilles.


Tropics update: We now just have two tropical disturbances to watch in the Atlantic. One has a high chance of development and the other has a medium chance. These will stay out in the Atlantic. Danielle is the next name if one becomes a tropical storm. pic.twitter.com/m13oNojyti

A tropical disturbance is a weather system that migrates within the tropics and keeps its form for 24 hours or more, giving it the potential to become a more intense storm.

As of this morning, the nearer of the two disturbances in the Atlantic has an 80 percent chance to develop into a tropical storm. The next named storm to form will be christened "Danielle."

Even if we get through August without a major weather event, we're nowhere near out of this hurricane season's figurative woods.

According to the National Oceanic and Atmospheric Administration (NOAA), the most active period of the Atlantic hurricane season kicks off around mid-August and sticks around until mid-October.

A graph from NOAA using data from Atlantic hurricane seasons from 1944 to 2020 shows that the U.S. East Coast's seasonal peak arrives in early to mid-September. 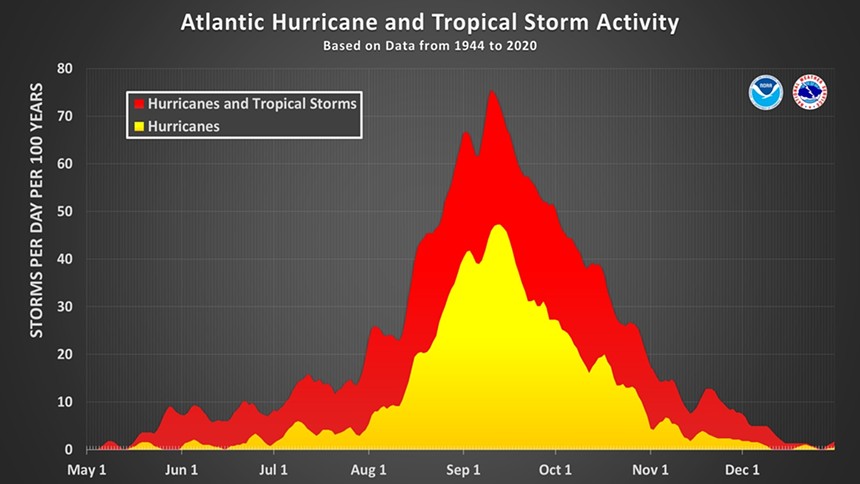 Don't be fooled: This graph may resemble a cozy campfire, but its message is far wetter and less fun.
Screenshot via National Oceanic and Atmospheric Administration
Miami is only two years removed from the most active hurricane season on record, 2020, and climate scientists have warned of potentially more active seasons in the future, with even stronger storms, owing to climate change. With that in mind, it's probably best to keep an eye out to the east for eye formation.

And though we don't have a handy chart to prove it, in our experience, blue skies are the best time to avoid long lines at Home Depot and Walmart.

Miami-Dade County offers a hurricane kit checklist with a list of supplies you should have on hand in the event of a major storm, including seven days worth of water and nonperishable food. The county's hurricane readiness site also provides maps of storm surge zones and guides explaining how to safely evacuate if worse comes to worst.
KEEP MIAMI NEW TIMES FREE... Since we started Miami New Times, it has been defined as the free, independent voice of Miami, and we'd like to keep it that way. With local media under siege, it's more important than ever for us to rally support behind funding our local journalism. You can help by participating in our "I Support" program, allowing us to keep offering readers access to our incisive coverage of local news, food and culture with no paywalls.
Make a one-time donation today for as little as $1.