Ten Reasons the Miami Heat Will Return to the NBA Finals 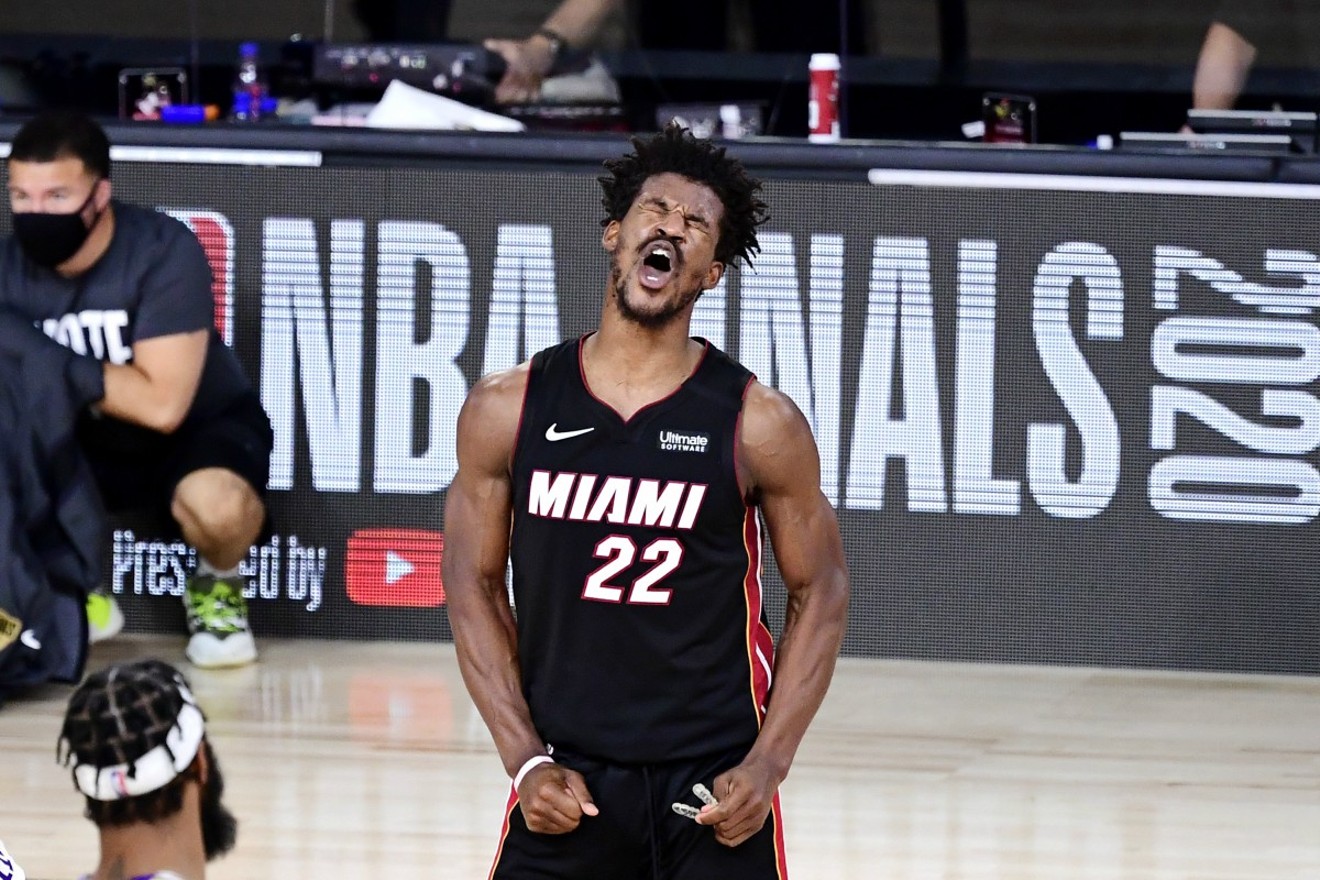 Jimmy Butler knows what the team expects from him and what he needs to provide for the team to be its best. Photo by Douglas P. DeFelice/Getty
The Miami Heat take the floor for tonight's season opener against the Orlando Magic as the defending Eastern Conference champions. For a team like, say, Orlando, that would be something to brag about. For a franchise like the Miami Heat — one that has been to the NBA Finals for five of the past 11 years — being the prettiest loser isn't exactly cause for celebration.

Sure, there will be a night this season when the team raises a banner to commemorate the weirdest season ever, but don't expect Pitbull to show up. Don't expect DJ Khaled to scream "Another one!" when they raise the second-place fabric to the sky.

The Miami Heat is rightly focused on how to get back to the NBA Finals. Few people outside Miami expect the team to achieve that goal, but anyone who knows what the Heat is about knows that you'd be crazy to count these guys out.

Will the Heat play for the NBA championship this year? We think so. Follow our reasoning.

Tyler Herro, the sequel. After a season that lasted more than a calendar year, it feels like Tyler Herro is in his third season. It's tough to believe that was a rookie we all witnessed dominate the NBA bubble. Herro finished the year averaging 13 points, four rebounds, and two assists per game. Those numbers don't tell the whole story. He played like a player who could drop 25 on any given night without breaking a sweat.

Tyler Herro is still only 20 years old. If that was his rookie season, imagine what he will bring to the table this year.
The Brooklyn Nets experiment will fail miserably. The Brooklyn Nets are considered a frontrunner for the NBA Finals. But Kevin Durant and Kyrie Irving are two of the most polarizing players in the NBA, known for publicly airing their grievances. The two also have a history of serious injuries. To think the two can team up — especially in Durant's first season back after a torn Achilles — to make it to the championship in their first season is to make wild assumptions about how well they'll jell.

The Nets are conducting an experiment that will rely on injured stars and offense. The Miami Heat is a known commodity that relies on defense — something that travels well and translates much better from season to season.

Jimmy Butler knows what to expect. Hitting the ground running is hard. Even LeBron James and Chris Bosh lost in the NBA Finals in their first year in Miami. Jimmy Butler has his first — and the longest-ever — Heat season out of the way. He knows what the team expects from him and what he needs to provide for the team to be its best.

Everyone is more comfortable on their second day of school. Jimmy Butler can surely return for a second trip to the NBA Finals in two years with his new team.
It's KZ Okpala szn. Ladies and gentlemen, the moment has arrived: It's KZ Okpala season. The man the Heat sent their 2022, 2025, and 2026 second-round draft picks to the Indiana Pacers for has been working in the lab for a year and is ready to be unleashed on the NBA. Are we overreacting to one fantastic preseason game? Probably! Does it feel good to be alive? YES!

Okpala was a project coming into his rookie season. He averaged 16.8 points, 5.7 rebounds, two assists, and one steal in 32.7 minutes at Stanford, but he was as skinny as a pole and not ready to take on NBA-level talent. That's changed now.
The Miami Heat isn't scared of Giannis. There's a certain level of anxiety in overcoming a challenge you've never been faced with, but once you've dominated the task, it's not so daunting the next time around. The Heat beat the Milwaukee Bucks in five games in last season's playoffs. Bucks star Giannis Antetokounmpo was a mess in the series before eventually watching his team close out the loss on the bench thanks to injury.

Not only did the Heat dominate Giannis in the bubble, but the team did it back in March. The Heat beat the Bucks back then, too, and Giannis scored all of 13 points.

The Heat is just a bad matchup for Giannis and the Bucks.

Bam Adebayo got paid. It must have been stressful for Bam Adebayo knowing he was on the verge of getting paid $200 million if he didn't have a catastrophic injury or medical condition pop up. It had to be in the back of his mind. But all is well this season — being confirmed wealthy for life has to be comforting, even for a player like Bam. Now all that matters is winning.

Bam bought his mom a house. He's doing work in the community. Miami will be his home for years. Now it's just about getting better, which, having seen what Bam was already able to do in his first three seasons, is a scary proposition, especially for opposing teams.
The Boston Celtics got worse. Losing Gordon Hayward in the offseason may not be a big deal to those who didn't see him as a great fit, but it's a loss of what that team considered, at the very least, to be a quality part of its rotation. For a few moments when Hayward returned in the Heat-Celtics series in the bubble, it did seem as if he brought something to the table that Boston lacked.

Now he's gone, and they'll fill his role with Tristan Thompson and Jeff Teague. Nobody is afraid of those additions. The Heat is the better team. It was in October, and it will be in June.
Duncan Robinson no longer has imposter syndrome. Duncan Robinson wasn't sure he belonged in the NBA. His rise from Division III Williams College to the Miami Heat in less than seven years was so miraculous he wasn't even sure he bought it as of last preseason. He's said as much in the media. Recently, though, he's made it clear in interviews that he knows he not only belongs in the NBA, but also could go on to be one of the best shooters in NBA history.

With Robinson now coming into his own, his confidence will be at an all-time high to start a season for the first time. That ought to send a shiver down the figurative spine of the rest of the NBA.
James Harden is probably going to one of the Heat's competitors. It's likely — if he doesn't come to the Miami Heat — that James Harden is headed to the Philadelphia 76ers, Toronto Raptors, Brooklyn Nets, or Boston Celtics. Whoever lands him will strip their team clean of every piece they have and go at it with Harden and no training camp or offseason to adjust their play.

I'd rather be the Miami Heat — which just got done playing for months together — than a team trying to adjust on the fly with James Harden, one other good player, and little else left.
No team enters the season in a more cohesive place than the Miami Heat. Duncan Robinson recently said in a radio interview on 790 The Ticket that it doesn't even feel like the Heat stopped playing. Robinson said when the players returned to practice, it felt like they'd never left. While other teams had nine months off and rosters that have completely changed, the Heat lost Jae Crowder but added more depth and brought back four starters.

The Heat is ready to play because it never stopped playing. A lot of its opponents will need months to get up to speed because they've been watching Netflix since March. The Heat just got done playing the Lakers in the NBA Finals. Miami will be right back there — likely against the same team — come the end of this season.
KEEP MIAMI NEW TIMES FREE... Since we started Miami New Times, it has been defined as the free, independent voice of Miami, and we'd like to keep it that way. With local media under siege, it's more important than ever for us to rally support behind funding our local journalism. You can help by participating in our "I Support" program, allowing us to keep offering readers access to our incisive coverage of local news, food and culture with no paywalls.
Make a one-time donation today for as little as $1.