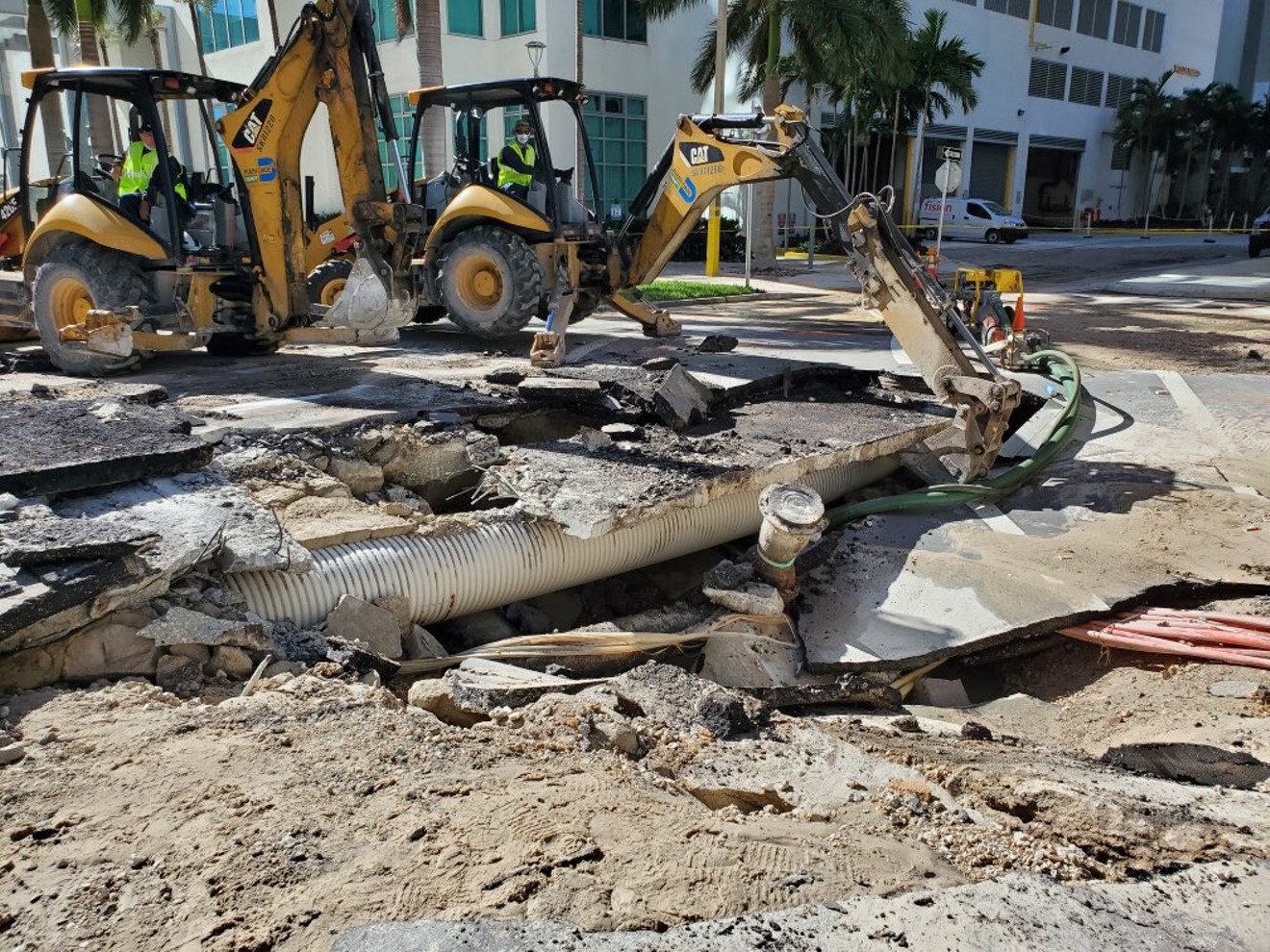 A water main pipe broke in downtown Miami, creating a sinkhole. Photo by Miami-Dade Water and Sewer
Water has been shut off and Metromover service has been suspended in parts of downtown Miami today after a water main burst, spewing water and sediment into the road and Biscayne Bay.

At 7 this morning, a 12-inch freshwater pipe burst at 300 Biscayne Boulevard Way, which caused pressurized water to spew out, breaking parts of the road and creating a sinkhole. The water also mixed with underground sediment, covering parts of the street and some parking garages with a layer of mud. Some of the sediment also infiltrated into Biscayne Bay through storm drains, according to Miami city commissioner Ken Russell.

"Sediment is spilling out into the bay. Basically that entire area was filled up well above the curb," Russell tells New Times.

Because of the sinkhole's proximity to a Metromover column, service has been shut down until transportation officials can decide how to resume rides safely, according to Miami-Dade County commissioner Eileen Higgins.

"The Metromover is closed for now, and we're gonna give time for the street to be repaired," Higgins tells New Times.

In the meantime, Higgins says residents who rely on the Metromover should use the Miami-Dade bus system, which has a free emergency shuttle route that runs during Metromover service interruptions.


I’ve been on phone with all morning with @MiamiDadeWater director regarding this water main break - land side - in Downtown Miami. Crews from WASD and inspectors from @CityofMiami are in route. Stay tuned for more updates. pic.twitter.com/H6IXCfWLgJ

Miami-Dade Water and Sewer Department director Kevin Lynskey tells New Times the pipe rupture was likely a "natural break" caused by weak points in the iron water main. The pipe was set to be replaced next year.

"It was an iron pipe scheduled for replacement. We were 60 percent done with the design process and construction was due in a year, so the timing is interesting," Lynskey says.

Lynskey tells New Times that water has been shut off for buildings near the pipe rupture, including the Met 1 building at 300 Biscayne Boulevard Way, but water services should return by tomorrow morning if the repairs go well. The county is finalizing a list of affected properties, according to the water and sewer department's Twitter page.

A boil-water warning will be issued for the area for at least 48 hours until the department can appropriately test water from the new pipe, Lynskey says.

Rachel Silverstein, executive director for the advocacy group Miami Waterkeeper, tells New Times the organization is concerned about the environmental impacts of the sediment spill into Biscayne Bay and will ask the county to implement remediation efforts to help reduce the risk to wildlife.

"Sediment has a couple of negative effects on water quality. It clouds the water and blocks sunlight when it needs to reach sea grass and coral," Silverstein says. "And when it falls out of the water column and lands at the bottom of the bay, it can smother coral and negatively impact wildlife."
KEEP MIAMI NEW TIMES FREE... Since we started Miami New Times, it has been defined as the free, independent voice of Miami, and we'd like to keep it that way. With local media under siege, it's more important than ever for us to rally support behind funding our local journalism. You can help by participating in our "I Support" program, allowing us to keep offering readers access to our incisive coverage of local news, food and culture with no paywalls.
Make a one-time donation today for as little as $1.