Nine Structures That Have Been Evacuated or Collapsed Since Surfside 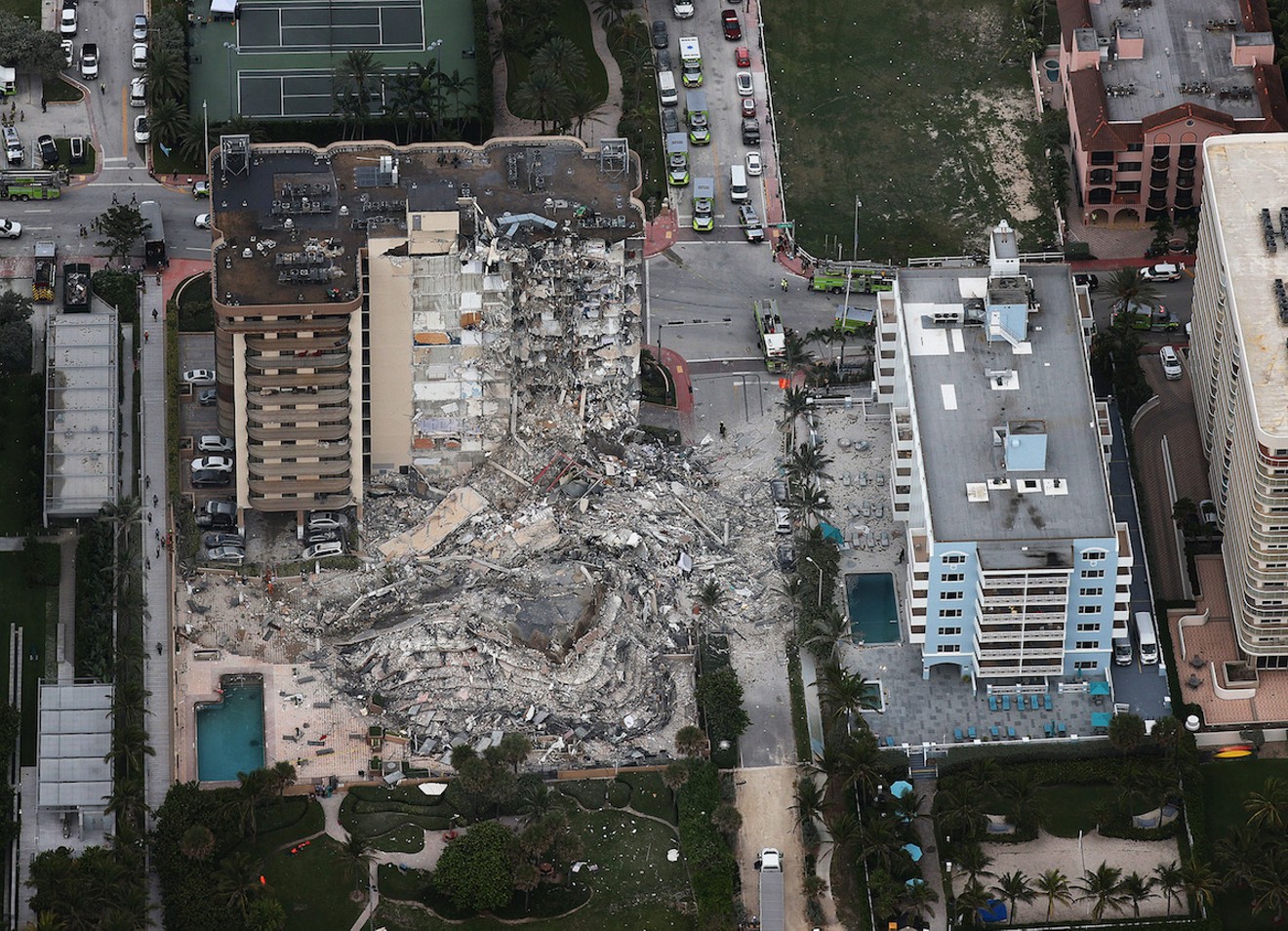 Unsafe structures are being reported in the weeks following the Champlain Towers South collapse. Photo by Joe Raedle/Getty Images
When the Florida International University pedestrian bridge collapsed and killed six people on March 15, 2018, it seemed reasonable to be wary of driving on or under bridges and elevated highways in the days that followed. But as weeks and months passed, and no other bridge unexpectedly crumbled, that structural failure appeared to be an isolated event and faith in the region's infrastructure remained relatively intact.

Those exact fears, that Miami's infrastructure would not hold, came to pass three years later, when the 12-story Champlain Towers South tragically pancaked into its own underground parking garage, killing at least 97 people.

The loss has been catastrophic, leaving the community to question the concept of a benevolent God, but, less abstractly, whether the structures we inhabit on this porous chunk of limestone are in fact safe. (Insurance companies are wondering, too, though their motives are more financial than existential.)

Unlike the aftermath of the FIU bridge collapse, as more time passes, more structures are revealing themselves to be unsteady.

On Wednesday, the Miami-Dade County Unsafe Structures Board met for the first time since the Surfside collapse, and revealed that an estimated 1,000⁠ unsafe-structure cases are currently pending.

That substantial figure, coupled with news of the partial collapse of a projection screen under construction at this weekend's upcoming Rolling Loud hip-hop festival yesterday, prompted New Times to piece together a timeline of structures in Miami that have collapsed or been evacuated since Champlain Towers South fell on June 24. 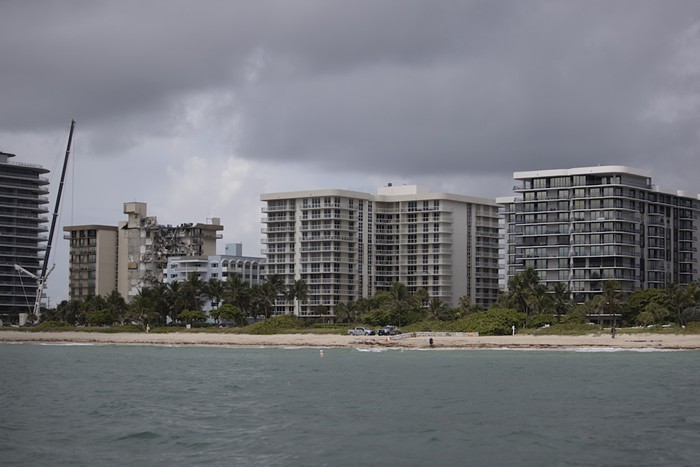 Located just to the north of the collapsed condo tower, Champlain Towers North was built by the same developer a year after the Champlain Towers South was completed. Mayor Charles Burkett of Surfside called the north tower "identical" to the south and told WSVN he was going to "recommend moving people out of that building." Though the evacuation wasn't mandatory, Burkett told the New York Times that "personally [he] would not want to take that chance.”

Residents who opted to evacuate were told to visit FEMA's Family Assistance Center to be relocated until the property could be properly reviewed. 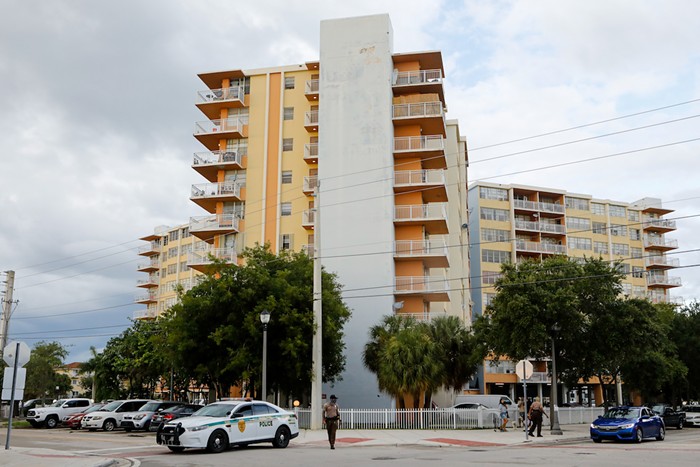 On January 11, an engineer issued an "unsafe" warning regarding the 156-unit North Miami Beach condo, citing structural and electrical concerns. But it was an audit following the Champlain Towers South collapse that prompted the city's building and zoning department to abruptly evacuate the building on July 2.

Of Crestview's roughly 300 residents, 150 had no place to go for the three days the building was condemned. According to WPLG, a North Miami Beach bus and trolley shuttled them to a temporary shelter at the Miami-Dade County Fair and Expo Center in Tamiami Park.

Residents were permitted to return on July 5. Crestview Towers Association attorney Mariel Tollinchi explained that the necessary structural and electrical repairs could be safely conducted while the building was occupied.

Miami Beach spokesperson Melissa Berthier told WPLG, “In an abundance of caution, the building official has required the vacating of this building until further information can be obtained."

The American Red Cross assisted one resident who was not immediately able to secure housing.

A complex of 70-year-old, coral-hued buildings on Surfside's beachfront was voluntarily evacuated after an engineer identified structural problems with columns in the parking area. According to the Wall Street Journal, a developer who owned a majority of the units has decided to purchase the rest and likely demolish the structure. Surfside town building official James McGuinness told the WSJ he considered "Regent Palace a success story because the problems were found and residents voluntarily left for safety." Floors 16 and above were evacuated at the Miami-Dade County Courthouse downtown.
Photo by Phillip Pessar/Flickr

Most civil court cases in the county are heard at the 28-story Miami-Dade County Courthouse at 73 W. Flagler St. in downtown Miami. On July 10, floors 16 and above were evacuated after an engineer's report identified "safety concerns."

Courthouse staff was instructed to work from home while necessary repairs are completed.

The courthouse was built in 1928 and placed on the National Register of Historic Places in 1989. In 2008, an inspector found widespread mold, water leaks and pests, which caused the building to temporarily close while repairs were made.

Fourteen tenants of the two-story, 30-unit apartment located at 6881 Indian Creek Dr. were given until July 19 to vacate the property after it was deemed unsafe. According to the Real Deal, the owner of the building had planned to demolish the structure and replace it with townhouses.

Miami Beach spokesperson Melissa Berthier told TRD that the building had shown "deficiencies," but was "not in danger of imminent collapse.”


LIVE: Part of the Rolling Loud stage at Hard Rock Stadium in Miami Gardens has collapsed, just a day before the festival was supposed to kick-off. So far, no injuries have been reported. (Note: No sound from helicopter.) https://t.co/9R5UzBCWWR

After being repeatedly rescheduled amid the pandemic, the Rolling Loud hip-hop festival had finally secured its return, July 23-25, with A$AP Rocky, Post Malone, and Travis Scott headlining.

But hours before thousands of ticket holders were set to descend upon the Hard Rock Stadium grounds in Miami Gardens for the long-awaited, sold-out music fest, an immense projection screen appears to have collapsed on top of a stage.

The Miami Herald reported that the screen hadn't been secured during construction and fell as a result.

A tweet from Rolling Loud's account assured that no one was hurt and the show will go on. Caution tape keeps residents from entering the 56-year-old building after it was evacuated.
Photo by Teri D'Amico

On Wednesday evening, tenants of the 24-unit Forum Apartments were told to immediately evacuate following a building inspection that found the structure to be unsafe. The building is located at 1080 93 Street in the Town of Bay Harbor Islands, roughly two miles from the site of the Champlain Towers South.


Inspectors from a third-party engineering company found significant structural defects in the building, prompting town officials and Bay Harbor Police to evacuate tenants, according to a statement from Town Manager Maria Lasday.

The 56-year-old apartment structure had been cited by the town and Miami-Dade Fire Rescue for numerous violations, according to the statement.
KEEP MIAMI NEW TIMES FREE... Since we started Miami New Times, it has been defined as the free, independent voice of Miami, and we'd like to keep it that way. With local media under siege, it's more important than ever for us to rally support behind funding our local journalism. You can help by participating in our "I Support" program, allowing us to keep offering readers access to our incisive coverage of local news, food and culture with no paywalls.
Make a one-time donation today for as little as $1.