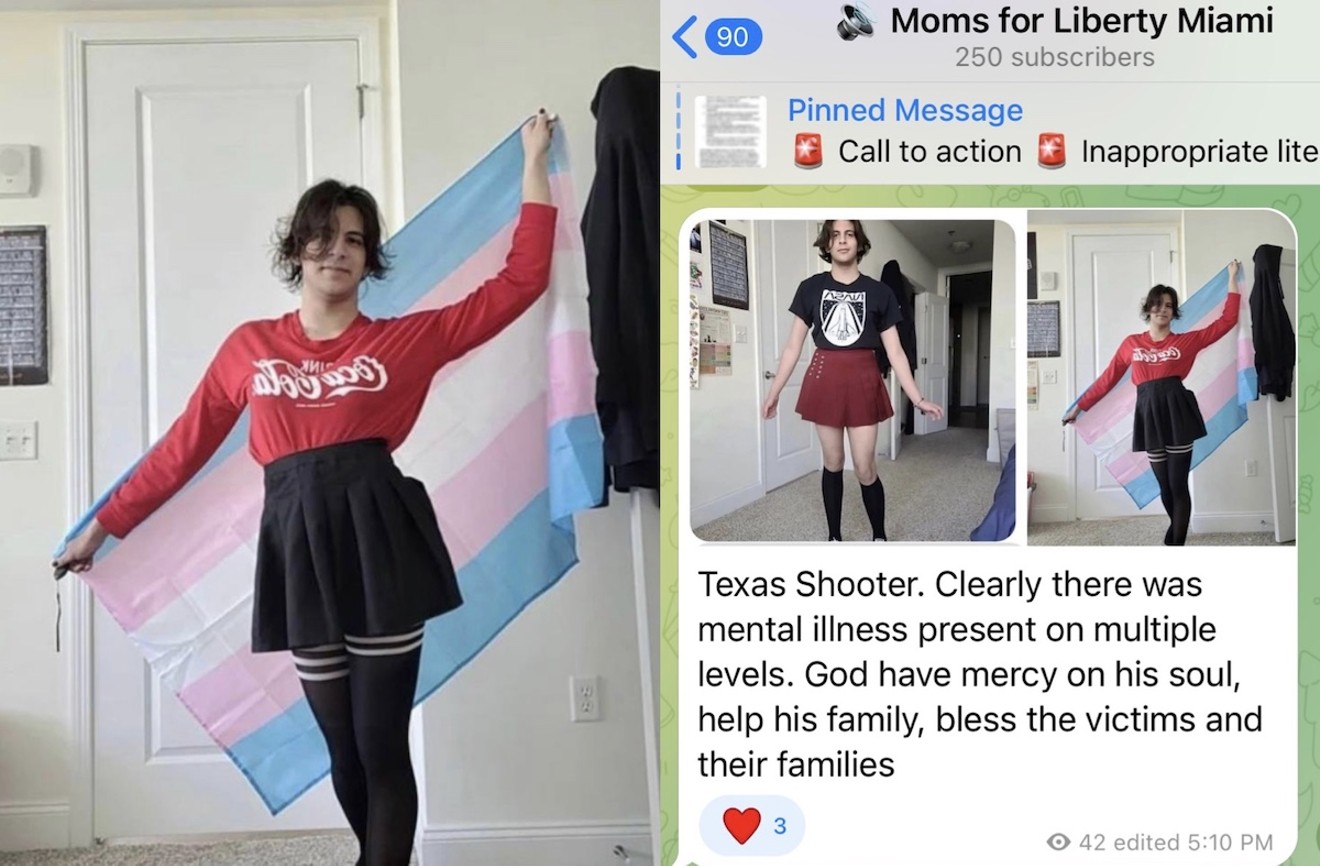 The Uvalde shooter wasn't transgender, but two local far-right groups helped to spread the misinformation. Screenshots via Telegram
Like so many other potentially harmful conspiracy theories, this one begins on 4chan.

On the forum website, notorious for its lack of moderation, users began sharing photos of a 20-year-old trans woman named Sam, who lives in Georgia, falsely identifying her as the Uvalde elementary school shooter who killed 19 children and two adults on Tuesday.

The true identity of the shooter is 18-year-old Salvador Ramos, a cisgender man who was killed by police on the scene. But that didn't stop the misinformation from spreading, prompting conservatives, including author Candace Owens and InfoWars host Alex Jones to chime in. Arizona Republican Rep. Paul Gosar went so far as to call Ramos a "transsexual leftist illegal alien."

Like a coronavirus spreading among unmasked people, the false conspiracy continued spreading — even after multiple news sites clarified that Ramos wasn't transgender and that the online theory was baseless.

By Wednesday afternoon, the debunked online rumor was being disseminated on Telegram and Instagram by Miami members of the far-right groups Moms for Liberty Miami and Floridians First.

One post in the Floridians First Telegram group referred to the shooter as a "gender-confused illegal."

"The children are confused...because of these insane agendas that are being shoved down their throats," Eulalia Jimenez, chair of the Miami chapter of Moms for Liberty Miami, was pictured saying in a since-expired Instagram Story on @momsforlibertymiami. "Even the shooter — what, an 18-year-old transgender boy trying to be a girl?"

She talks about a “war on children” and “the insane [LGBTQ] agenda being shoved down their throats” 🧵👇 pic.twitter.com/zoA6StjWO3

Floridians First and Miami's Moms for Liberty chapter did not return New Times' request for comment, though the latter blocked a New Times reporter who sent a direct message seeking comment. Jimenez did not respond to requests for comment.

Miami Against Fascism, which tracks the activities of far-right groups across South Florida, also shared other incidences of misinformation about the Uvalde shooter being shared in local far-right circles.

"Right on queue, Miami M4L and Proud Boy front Floridians First are pedling [sic] bigoted lies from 4chan in their telegram that the Texas school shooter was trans," the group tweeted on Wednesday evening.


Right on queue, Miami M4L and Proud Boy front Floridians First are pedling bigoted lies from 4chan in their telegram that the Texas school shooter was trans and a “gender-confused illegal.” (see next tweet for info).#LyingEulalia pic.twitter.com/vSJ5nQh89W

On Facebook, Floridians' First Miami-Dade describes itself as a "grass roots organization that believes in America First thus Florida First." But Miami Against Fascism and others have speculated that it may be a front for local Proud Boys in an effort to sanitize their reputation following publicity and indictments surrounding their participation in the insurrection at the U.S. Capitol on January 6, 2021. Similarly, the national Moms for Liberty organization (including its local Miami-Dade chapter) claims to advocate for "parental rights," but activists have previously documented the group's far-right agenda and alleged ties to QAnon conspiracy theories.

Local Moms for Liberty leader Jimenez has shared a number of conspiracy theories on Instagram in the past, including a photo from the January 6 insurrection with the caption "the storm is upon us. Trust the process" and a reference to COVID-19 vaccines as "poison." (At Miami's "Jan. 6 Commemoration" earlier this year, Jimenez told New Times at that she attended Donald Trump's rally on the day of the insurrection but did not enter the Capitol.)

During a mid-December press conference, Jimenez shared the stage with Gov. Ron DeSantis to promote the passage of the so-called Stop WOKE Act, which bans educators from discussing certain topics about race.

According to Trans Safety Network, a U.K.-based group that monitors online threats against the trans community, the photos that falsely identify the Texas shooter as transgender are of three different transgender women, including Sam from Georgia, who asked NBC News to only publish her first name to protect her safety because she has already faced harassment and threats in connection with the incident.

Nic Zantop, deputy director of Transinclusive Group, a Broward-based grassroots organization that provides services to the local LGBTQ community, explains how hurtful an online rumor like this can be to an already marginalized community.

"We are already seeing the violent ripple effects of this dangerous fear-mongering and scapegoating," Zantop tells New Times, referring to reports of a transgender high school student in Texas being assaulted by a group of men who believed the misinformation about the Uvalde shooter. "Too often, transgender and LGBTQ+ people are the targets of hatred and discrimination."

"We face attacks on multiple fronts as the rise of anti-trans legislation further empowers and emboldens violent rhetoric and actions against transgender people across the country and here in Florida," Zantop says. "The last thing our communities need is more hate."
KEEP MIAMI NEW TIMES FREE... Since we started Miami New Times, it has been defined as the free, independent voice of Miami, and we'd like to keep it that way. With local media under siege, it's more important than ever for us to rally support behind funding our local journalism. You can help by participating in our "I Support" program, allowing us to keep offering readers access to our incisive coverage of local news, food and culture with no paywalls.
Make a one-time donation today for as little as $1.