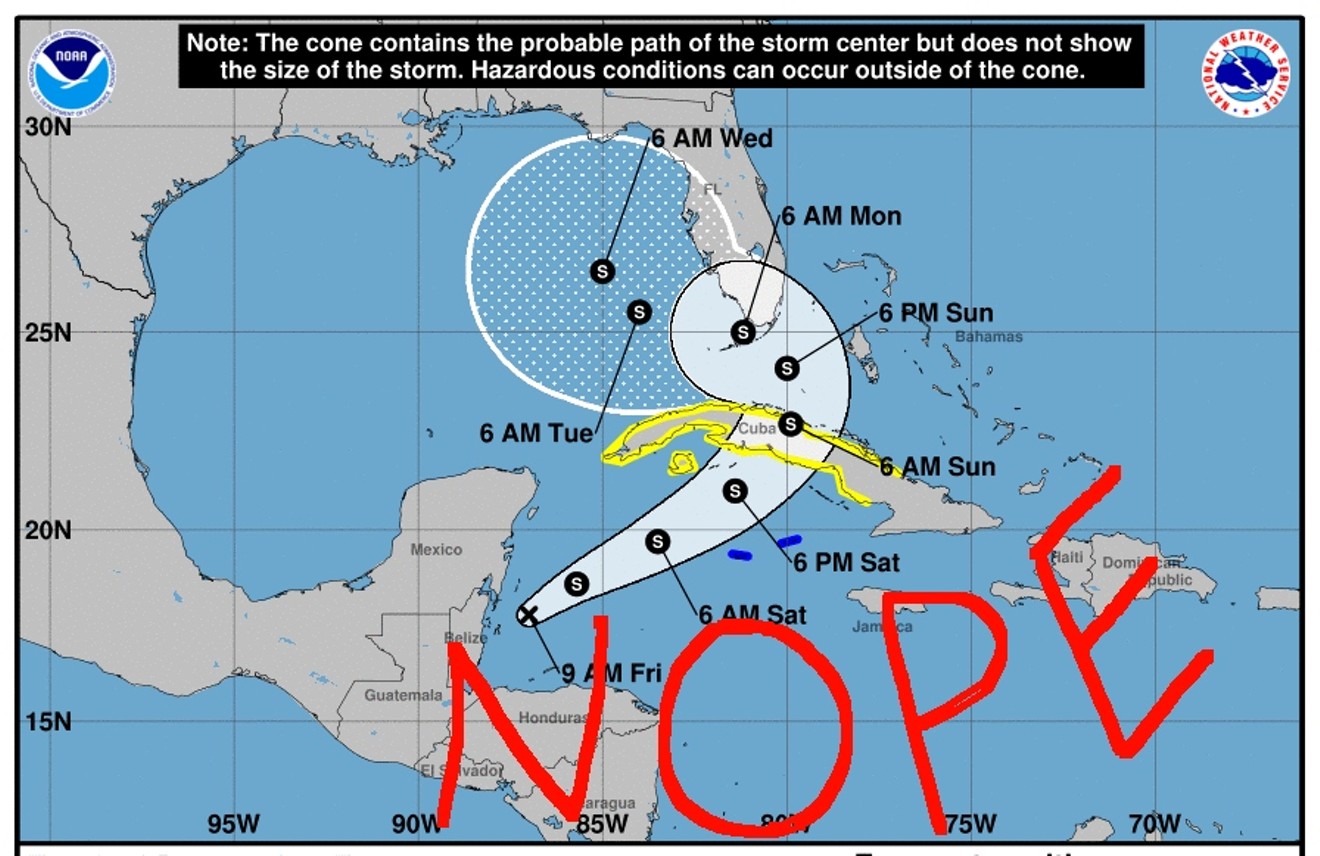 Graphic design is my passion. Illustration by Jessica Lipscomb
Update, November 6: This story has been updated to include details from the latest forecast.

Remember back in 2016 when the New Yorker called "O-o-h Child" the "best song for soothing your election anxiety"? Well, it's time to fire up the Five Stairsteps again!

All those stores in Miami that boarded up their windows in preparation for post-Election Day riots may as well keep their plywood up: The National Weather Service is forecasting that a system called Eta is expected to strengthen back into a tropical storm as it approaches South Florida.

Amid an unprecedented pandemic, an uncertain presidential-election outcome, and a biblical-level flood that shut down the national treasure known as the Mai-Kai, 2020 has delivered yet another disaster. Eta made landfall in Nicaragua on Tuesday as a Category 4 hurricane, and it began moving over Honduras and Guatemala on Thursday.

Weather experts said the storm would lead to "catastrophic, life-threatening flash flooding and river flooding across portions of Central America." Sadly, that forecast was accurate — already, 50 deaths have been reported in Central America, with the majority caused by landslides in Guatemala.

"There is an increasing risk of impacts from wind and flash flooding due to heavy rainfall in portions of southern Florida this weekend and early next week," the National Weather Service tweeted Friday morning. "Tropical Storm or Hurricane Watches will likely be issued later today/tonight parts of this area."
click to enlarge

At least 50 dead in Central America (one landslide in Guatemala took most of those lives) as #Eta moves back over the Caribbean today it will head toward south Florida by Monday. Heavy rain 5-15” in south Florida plus a push of water & winds. pic.twitter.com/JUmvicE44i

Fri AM Threat Cone maintains forecast track into South Florida / Keys Sunday & Monday. Eta is expected to be a large tropical storm when it passes us so it doesn't matter if you're IN or OUT of the cone, what matters is if you're in the tropical storm conditions area (yellow). pic.twitter.com/nP62GbbE2U

Miami-Dade County's Office of Emergency Management on Friday morning issued a flood watch that will be in effect through Monday. According to the county, Eta could deliver between six and eight inches of rain, with up to 15 inches in isolated areas.

If you're wondering what kind of name Eta is, it's Greek. This year's Atlantic hurricane season was so active that we already ran through all of the "regular" named storms and began a new list using the Greek alphabet. So far, we've already used up Alpha, Beta, Gamma, Delta, Epsilon, and Zeta, bringing us to Eta.
KEEP MIAMI NEW TIMES FREE... Since we started Miami New Times, it has been defined as the free, independent voice of Miami, and we'd like to keep it that way. With local media under siege, it's more important than ever for us to rally support behind funding our local journalism. You can help by participating in our "I Support" program, allowing us to keep offering readers access to our incisive coverage of local news, food and culture with no paywalls.
Make a one-time donation today for as little as $1.