Here's the Weirdest, Worst Stuff We Saw at Art Basel and Art Miami 2018 Jerry Iannelli
Maybe 20 percent of the pieces at any Miami Art Week fair fantastic. About 75 percent are either trite or meaningless. But the final 5 percent is where the fairs truly shine: Every one has something in the realm of five to ten pieces that truly, genuinely suck in spectacular fashion.

Though this year's Art Basel and Art Miami might have been light on spectacle, there were still some gems at these two fairs. Come along, scholars. It's time for the annual "Worst of Basel": Jerry Iannelli
QAnon is a conspiracy theory that posits a world where Donald Trump is trying to secretly arrest a coven of child molesters who have infiltrated the highest levels of the Democratic Party and Hollywood. It is dumb. One of the wildest parts of the theory is that a faction of QAnon believers thinks that John F. Kennedy Jr. didn't die in a plane  and that he's actually undercover to fight deep-state pedophiles. Does the above painting have something to do with QAnon? Maybe. Is it implying that  Jr. also orchestrated the 9/11 terror attack on the World Trade Center? We're not saying yes. We're just asking questions here. Jerry Iannelli
The dude who helped the Saudis kill Yemeni children, attacked Pakistan with drones until children began to fear the sky, and did absolutely zero to reign in Wall Street after the 2008 meltdown? That's Cowboy Barack, . He's hip. He's chill. Don't Google the name "Abdulrahman al-Awlaki." Barack is fleek! If you thought Art Basel was going to avoid homophobic Trump art, you think far too highly of the art world. These pieces come from Orlando-based painter Scott Scheidly's Pink series, which began before Trump took office and has long been labeled "offensive" to the LGBTQ community. Scheidly began the series by painting Adolf Hitler in a pink-and-purple ensemble. But lest anyone think this is some brainy comment on the lack of powerful gay male figures on Earth, think again: Scheidly, who is straight, says he created the series because he thinks it's funny to see leaders in feminine outfits. There's nothing deeper to it than that. He recently Instagrammed a painting of a femme Fidel Castro with the hashtag "#HePutACigarInMyButt." Many of his other posts are hashtagged simply "#funny." He also once painted Barack Obama as a pink pimp, which is both homophobic and racist. Jerry Iannelli
The artist Vanessa Andrade once wrote an entire screenplay in an Orlando magazine about how confusing and ultimately offensive Scheidly's art is. In the piece, she asks why Scheidly links "maleness" with power and why he seems to think that dressing Richard Nixon and Trump in feminine garb robs them of their strength.

"If it were to read as the artist hating the subject, it would also mean he hates the color pink and what it represents," one of the characters in the screenplay says.

"The subject is being attacked with the color pink," another character responds. "It’s homophobia. It’s strange because it seems unintentional, but it is so blatant.

Scheidly's responses have ranged from tone-deaf to confrontational. Speaking to the art magazine Juxtapoz this past October, Scheidly denied the paintings have anything to do with "gay culture" before he unwittingly revealed his homophobia.

"I’m poking fun at the subjects and feminizing them, but the paintings are not about gay culture at all," he said. "A lot of people think that, but that proves the power of color and how it can change perception. I do however put gay pride pins on Putin because he is so anti-gay. I’m not influenced by culture, but I do put George W. Bush in drag all the time because I didn’t like him and it cracks me up."

So he feminizes people he doesn't like and puts them in drag as a form of ridicule. That's just base-level homophobia and misogyny. Fuck off.

4. The "Of Course There Was Bitcoin Art at Art Basel" Award: Jerry Iannelli
New Times can't decide whether this is infuriatingly bad art or just a pitch-perfect troll job. What better metaphor for the cryptocurrency market — a world where talentless hacks got rich by selling worthless nonsense at ridiculous prices with no effort — than by printing a meme on some canvas and charging $150,000 for it? What collection of people worse taste and more hubris than Bitcoin billionaires? This  gets an "F" for aesthetic design but an "A+" in business acumen.

5. The "Thing That Will Get Purchased Only by a Violent Cartel Boss" Award:

Jerry Iannelli
These pieces actually looked pretty cool. The Bullet Bear, Bullet Snake, and Bullet Giraffe were a sight to behold. One could even argue they're at least a semi-interesting take on the morals of big-game hunting.

The problem, however, is that Art Basel's exhibitions are not museums; they are gigantic art markets. Everything is for sale. And the only Basel attendees with the taste and money to buy pieces this large and expensive are warlords and drug kingpins. Bullet Bear will end up in the foyer of the deputy waterboarding chief for Chechen dictator Ramzan Kadyrov.

6. The "No, Honey, You Definitely Didn't Sell Out" Award for Most Depressing Attempt to Maintain Street Cred: Jerry Iannelli
This writer shouted, "Oh, come on!" upon seeing this piece. This shit is for sale at an art fair that also sells Picasso paintings! An art fair in Miami! Some Martin Shkreli-wannabe is going to buy this to hang over his bed while he rolls up a bunch of $100 bills and smokes them like a cigar. Jerry Iannelli
Did you know that war is bad, actually?


WhisBe is known as a street-art "prankster" despite the fact that there appears to be nothing transgressive or thought-provoking about his so-called art. He's famous for two pieces: The first is a painting of Hitler's body with Ronald McDonald's head. Subversive! His second big series is the one you see above, Vandal Gummy. WhisBe sells Vandal Gummy on all sorts of merchandise, from shirts to posters to pins to straight-up tiny versions of the actual statue that appeared outside Art Miami this year. Thank you, WhisBe, for asking the serious question that we need to ponder in 2018 while the sea swallows the Earth: "What if a gummy bear... got arrested?"

Look, the entirety of Art Basel is a top-to-bottom waste of money and resources in an era when climate catastrophe and housing affordability are hitting crisis levels. Everyone who buys a painting at Art Basel should probably have their assets seized by the government. But that's doubly true for anyone interested in art like this — shallow, aesthetic nonentities that cost as much as a car or a house or a year's salary for the average American. When this city floods, a million leftover WhisBe gummy bears will remain standing and form a new, artificial underwater reef for clownfish and anemones. Our successors on the cooked, Venus-like planet we are creating will discover the submerged bears in the year 4592 and then ask God why we created so many of these indestructible resin bears. WhisBe will cackle that much louder while someone rips out his entrails in Hell.

11. The "Act Like a Goddam Adult Award" for Worst Use of Inspirational Quotes: 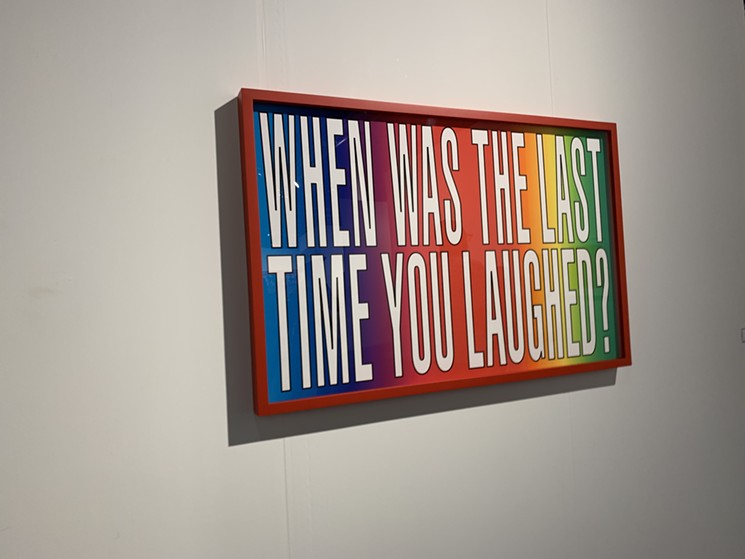 Jerry Iannelli
Extra points if you can include some sort of infantilizing quote for rich adult babies, like "Sounds like a day for warm socks" or "Think about the last good hug you received." 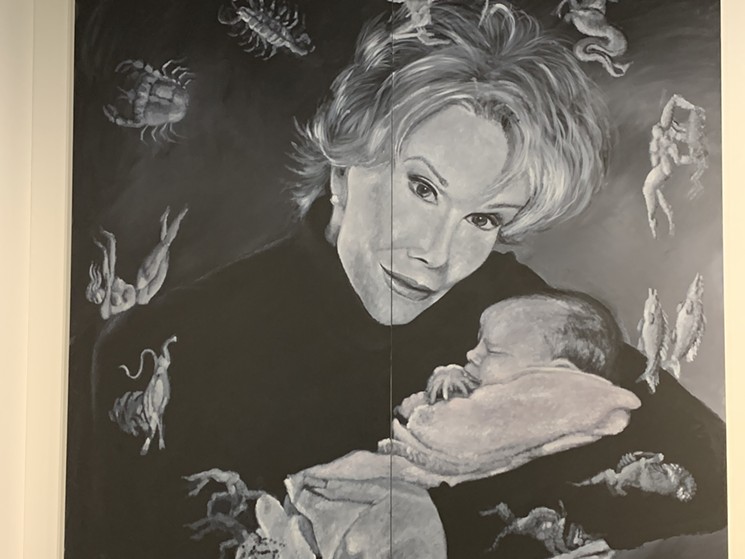 13. The Annual "Psychotic Video" Award for Psychotic Videos: Batman Vlogs While He Declares Bankruptcy and Spirals Into Meth Addiction:

Going through my collection of terrifying Art Basel images for a story, please enjoy “Batman Spirals into Meth Dependency” pic.twitter.com/BWPyyTEfAL 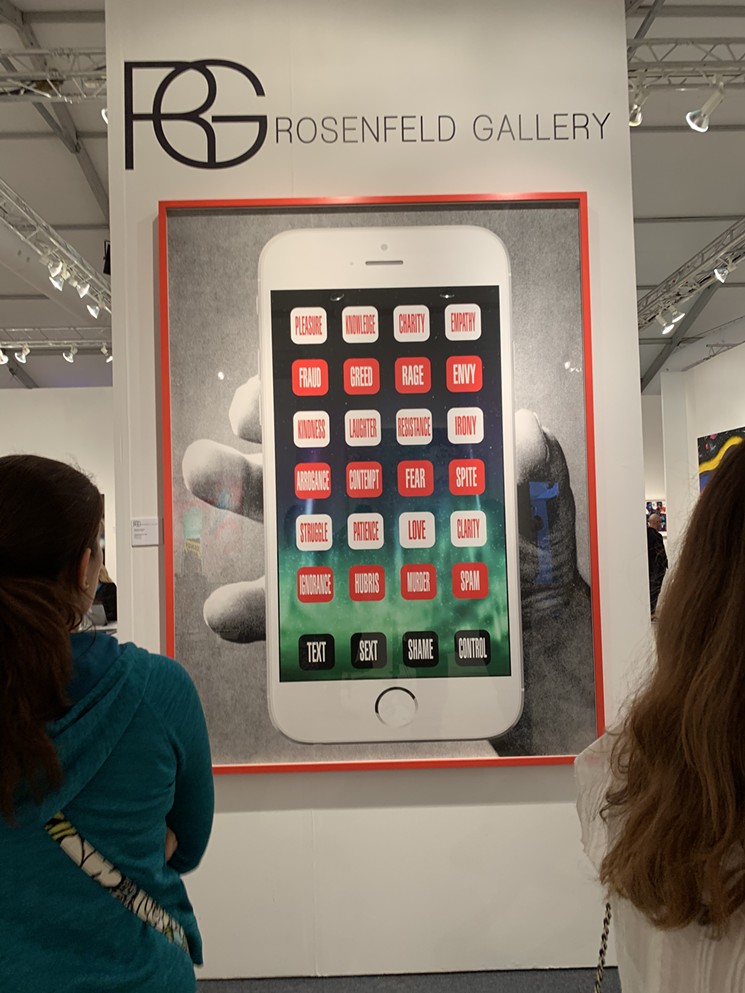 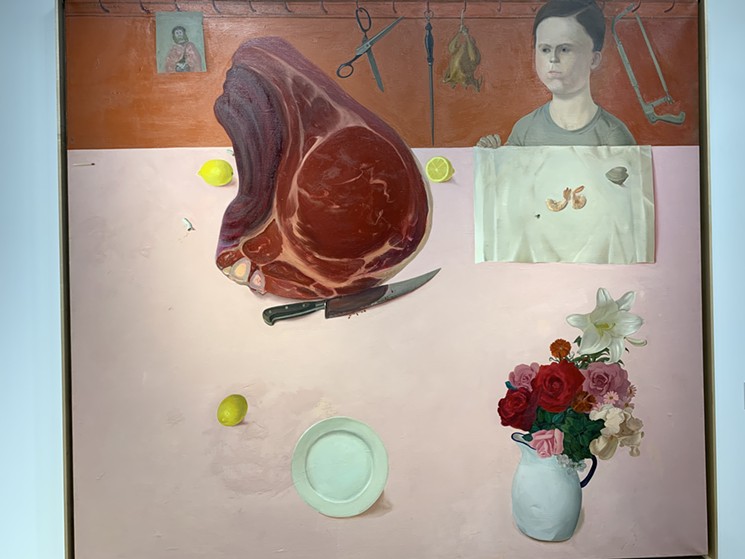 Meat boy. Meet ? Meat boy.
KEEP MIAMI NEW TIMES FREE... Since we started Miami New Times, it has been defined as the free, independent voice of Miami, and we'd like to keep it that way. With local media under siege, it's more important than ever for us to rally support behind funding our local journalism. You can help by participating in our "I Support" program, allowing us to keep offering readers access to our incisive coverage of local news, food and culture with no paywalls.
Make a one-time donation today for as little as $1.