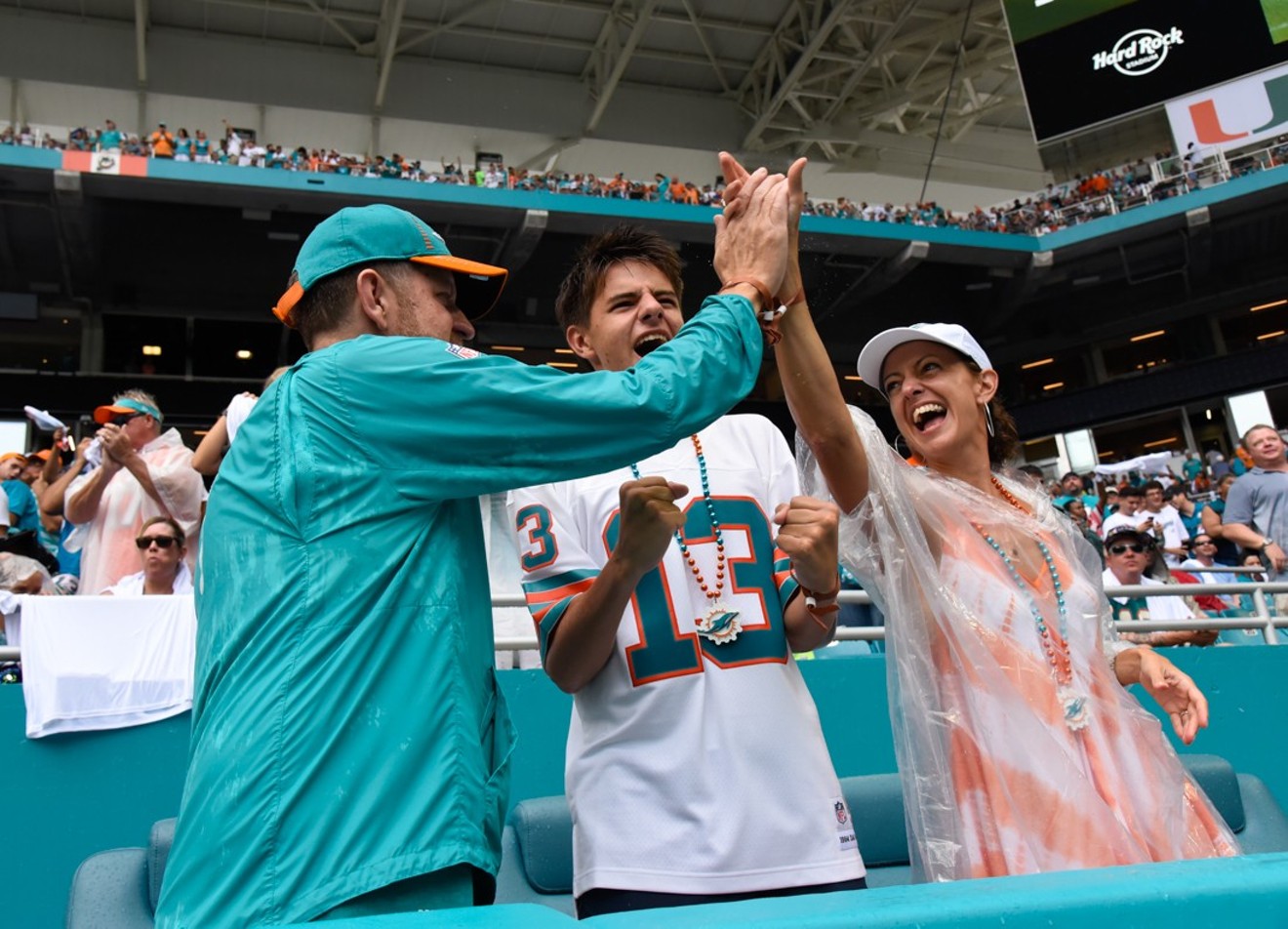 Miami Dolphins training camp starts this week in Davie. Photo by Michele Eve Sandberg
Come tomorrow at 9:40 a.m., the Miami Dolphins are back. Well, sort of. Their training practices will be open to the public at the Baptist Health Training Facility at Nova Southeastern University in Davie. Beggars can't be choosers, though, so we'll take it.

It's an annual tradition for NFL fans to obsess over July practices littered with soon-to-be personal trainers. For Dolphins fans, football has been gone for seven-plus long months — more if you count games that truly didn't matter at the end of last season. If DeVante Parker catches a 14-yard touchdown from a third-string quarterback against the fifth-string Dolphins defense and 30 Dolphins sports writers tweet about it, we're hyped.

It's what this time of year is all about, really. We overreact to things that don't truly matter come December. In the meantime, here's a guide to all of the overused lingo you can expect to hear now through the end of the preseason.


DAY 691: The Davante Parker breakout season has not happened yet... But we remain hopeful pic.twitter.com/cqTaurGgVC

5. "Breakout season." We've all heard it a million times: Player A will put it all together this year and become the player everyone envisioned he would be. Sometimes, as is the case with the looks-like-he-was-built-in-a-lab Dolphins wideout DeVante Parker, a player has multiple years of said promise, only to fizzle out like a cheap firework time and time again.

"Breakout seasons" are where fantasy football seasons are won and lost. They are also where Dolphins fans' hair is lost because of stress, disappointment, and heartbreak.
4. "On the bubble." One of the biggest reasons the HBO series Hard Knocks is so popular is because of the stories about the guy who is trying to make the team as the final 53rd man or, at the very least, a member of the team's practice squad. Hundreds of thousands of dollars and a dream is on the line. For fans, seeing the team take a flier on someone whom viewers are intrigued by and then watching him grow into a Pro-Bowler is like winning on a scratch-off ticket.

"The bubble" is a club with only a select number of chairs at the dinner table. If one man is added, someone has to get up and leave. Watching your team decide who gets popped and who remains in the circle of safety is what the next month is all about. Someone might be cut, or as Dolphins fans have seen in the past (see: above), someone can be traded to make room for that new guy.
3. "Buying in." Head coach Brian Flores will undoubtedly utter this phrase a few hundred times this season. Every head coach talks about players buying into the system or, in simpler terms, having guys who are "buying" what the teams are "selling," but you can be sure Flores — a guy coming from the New England Patriots and their famous "way" — will nail this home over and over again when he's asked about players getting better.

The Dolphins will have a lot of "buying in" this season if they are to change the bad habits they learned over the past few seasons under former coach Adam Gase. While they're adjusting, you'll certainly hear about it often.


Dolphins coach Brian Flores said he got the TNT slogan - Takes No Talent - from his high school coach and explained it to the masses. pic.twitter.com/uZLm5lNdHK

2. "Takes no talent." This one is interchangeable from year to year, or in the Miami Dolphins' case, every four years. Think of it as a motivational saying that comes along with a new coach as often as the Summer Olympics. It's like "feed the wolf," that confusing locker-room mantra the Dolphins had under coach Tony Sparano (RIP).

"Takes no talent" is represented by a "TNT" sign hanging on the training camp fields. The basic premise is there are some things you can do that take no talent at all — you just have to put in the work, practice your craft, and perfect it until it's second nature. Get ready to hear about TNT a lot over the course of the next month-plus.
1. "Fresh start." As stated above, the Miami Dolphins have a new head coach, Brian Flores. He rose through the ranks in New England — from an ex-college player getting coffee to the team's de facto defensive coordinator last season. He earned his stripes, and Miami has given him a chance to run his own show. Now, with a roster full of holdovers and a boatload of draft picks next season, the Dolphins will basically hold a 16-game tryout for the majority of the roster.

Don't like what DeVante Parker has done in the past? Flores and/or his coaching staff will undoubtedly say Parker is getting a "fresh start" under this new regime. Think Josh Rosen stunk in his rookie season in Arizona? Miami provides a fresh start. Anyone and everyone who has underperformed in the past will now get a shot to start over, prove they belong in Miami, and stay with Flores and the Dolphins for the long haul.

We could all use a fresh start from time to time. There will be a lot of Dolphins who get that chance beginning tomorrow at Dolphins camp.
KEEP MIAMI NEW TIMES FREE... Since we started Miami New Times, it has been defined as the free, independent voice of Miami, and we'd like to keep it that way. With local media under siege, it's more important than ever for us to rally support behind funding our local journalism. You can help by participating in our "I Support" program, allowing us to keep offering readers access to our incisive coverage of local news, food and culture with no paywalls.
Make a one-time donation today for as little as $1.