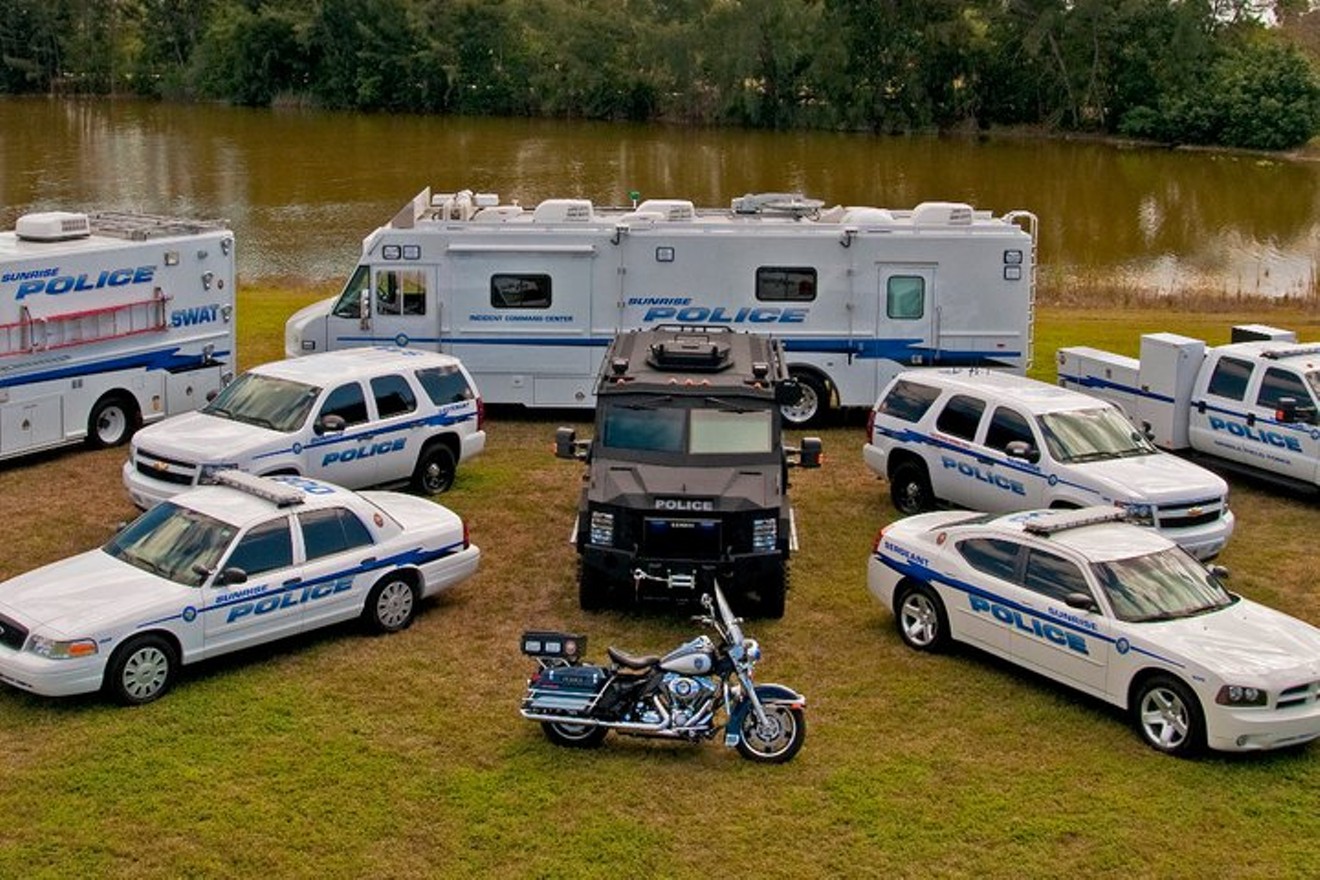 Sunrise Police Department
In 2014, the brother of Marlon Woodstock, a resident of Sunrise in Broward County, called to warn police that the 38-year-old was off his medication and possibly a danger to himself. Sunrise Police responded by tasering Woodstock, attacking him with a dog, and then shooting him dead.

The case highlights what can go wrong when law enforcement officers are not properly trained to deal with people in the midst of psychotic episodes. Fourteen-year veteran Officer Gregory Loor was cleared of wrongdoing in the shooting, but Woodstock's family is now suing the police department for retribution.

"At no time during this incident with the Sunrise Police Department and Officer Gregory did [Woodstock] pose a threat of harm to anyone's safety," the suit says.

According to the Sun Sentinel, Woodstock's brother, O'Neil Woodstock, called police early the morning of September 30, 2014, and said his brother had stopped taking his medication. He told cops that Woodstock had grabbed a knife and was stabbing holes in tires outside. He begged Sunrise Police to use the Baker Act to forcibly commit his brother to a mental institution.

"He needs to be Baker Acted and hospitalized, so if you could let the officers know that comes that's the situation that they're dealing with and not treat him like a criminal and do anything unnecessary," O'Neil Woodstock said, according to a 911 call the Sun Sentinel obtained.

In the meantime, O'Neil Woodstock said that he was following his brother in his own car and that he could not get out to stop Marlon on his own. O'Neil said his presence agitated his brother whenever Marlon stopped taking his medication.

But when police arrived, Sunrise cops say Marlon tried to run away. Eventually, the cops cornered Woodstock in a parking lot around 11 a.m., but instead of calmly working to encourage Marlon to drop the knife he was carrying, the cops instead fired Tasers at him. Police say the didn't work. The lawsuit, however, contradicts that claim. According to the suit, the Taser felled Woodstock to the ground.

The suit then alleges Sunrise Police shocked him a second time while he was prone and then unleashed a police dog on him. According to the suit, the dog bit Woodstock's leg.

According to the Sun Sentinel, cops originally believed Woodstock's wounds were not life-threatening, but he was then taken to Broward Health Medical Center in Fort Lauderdale, where he was pronounced dead.

The shooting is a microcosm of the struggles law enforcement officers face when dealing with psychotic subjects. According to a New York Times study, the mentally ill make up a disproportionate number of people shot by police every year. In response to concerns from citizens, advocates, and Barack Obama's Department of Justice, many departments, such as Portland, Oregon's, have turned to crisis-intervention training, which teaches officers to "disengage" with mentally ill suspects rather than attempt to subdue them using Tasers or guns.

Many reform advocates say better crisis-intervention training could likely have prevented North Miami Police from shooting Charles Kinsey, a behavioral technician who was black and simply trying to coax an autistic man out of a city street. Activists have also long maintained that police are much more likely to "" situations involving mentally ill or violent white  but are quick to pull the trigger when suspects are black.