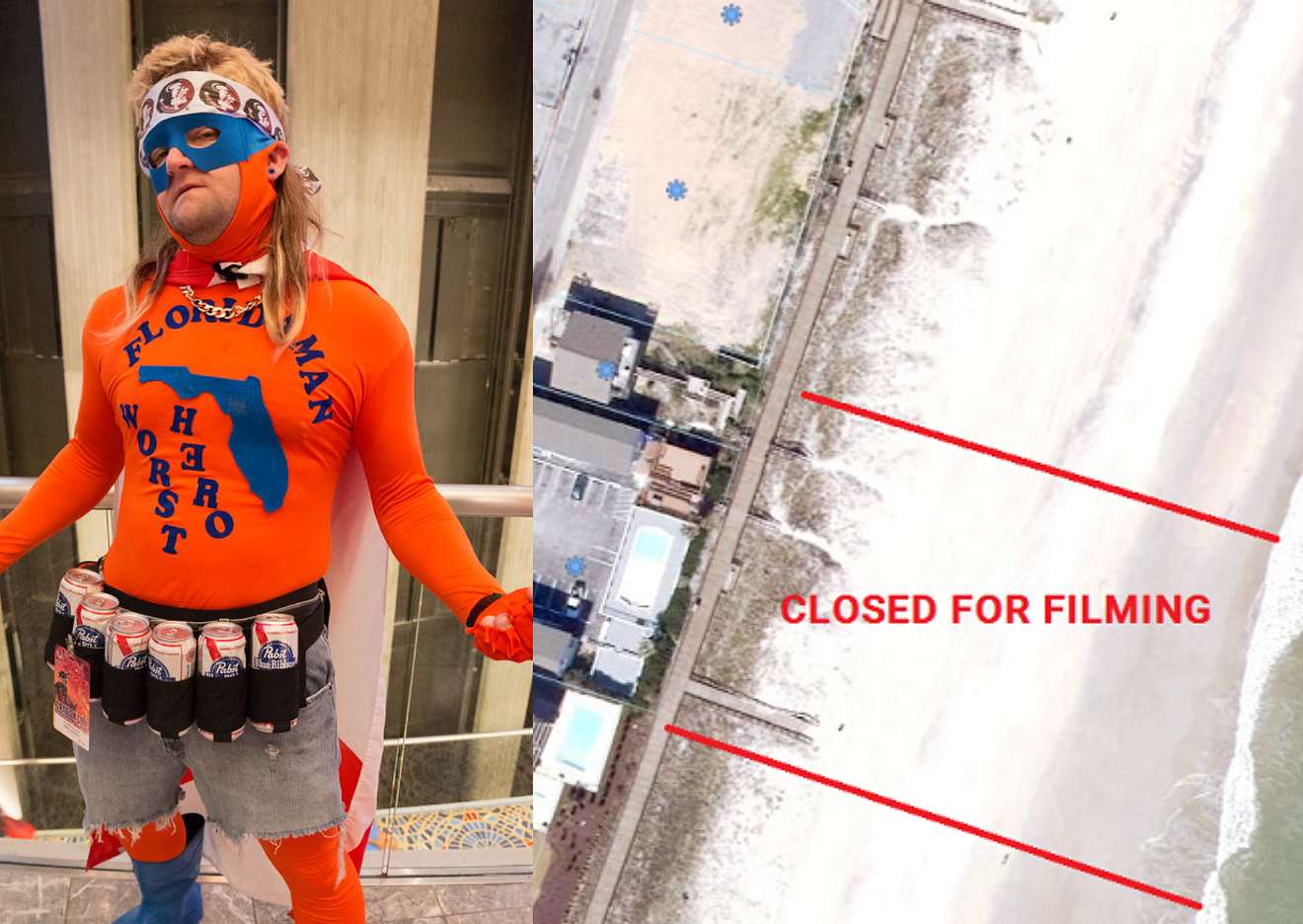 The Netflix show Florida Man is not being filmed in Florida, but in a small town in North Carolina. Photos by PrincessPaparazzi via Creative Commons, Town of Carolina Beach via Facebook.
If you're filming a show called Florida Man, wouldn't it make sense to actually film it in Florida? Apparently not, in the case of Netflix's latest action drama, which began shooting in a small North Carolina town this week.

The town of Carolina Beach on the North Carolina coast south of Wilmington announced the production on Facebook, and local news reported on street closures for the shoot.

Pretty benign news for Carolina Beach, but things got heated when Florida man and self-professed Florida enthusiast Craig Pittman saw the reports. He took to Twitter to share his discontent at the showrunner's choice in locale, suggesting Floridians band together to film a show about North Carolinians in Panama City, Florida.

"They missed an incredible opportunity to film and observe Florida Man in his natural habitat," Pittman seethes to New Times.


Seldom have I been so OUTRAGED as when I spotted this headline today -- Netflix is filming a show called "#Florida Man" someplace other than #Florida! I say we retaliate by filming a show about North Carolinians in Panama City! pic.twitter.com/kFyQhnqG5Y

The author of six Florida-themed books, Pittman is no stranger to viral "Florida man" news stories and the wacky antics that seem commonplace in the Sunshine State. His upcoming book, The State You're In: Florida Men, Florida Women, And Other Wildlife, will focus heavily on the chaotic stories of Pittman's favorite state.

In 2006, Florida was the third-largest filmmaking state in the nation, behind only California and New York. The state legislature allocated more than $240 million a year in tax credits for the film industry from 2010 to 2012. But after "a well-concerted and well-financed campaign" by the Koch brothers, the Republican-majority Florida House of Representatives refused to allocate any more money to the program during the 2012 legislative session. The incentives program officially ended in 2016, sending most productions to states with better incentives, such as Georgia and New Mexico.

It's a problem that potential Florida gubernatorial candidate Luther Campbell says he wants to fix. If elected, "Uncle Luke" says, he would give tax credits to the television and film industry to come here, and offer bonus incentives for productions set in communities of color and for hiring minorities.

The eight-episode Netflix series is unrelated to another TV series called Florida Man, an adaptation of Tom Cooper's 2020 novel of the same name that's currently in development by Anonymous Content.

This one, from showrunner Donald Todd and executive producers Jason Bateman and Michael Costigan, follows a struggling ex-cop (Yes Day actor Edgar Ramírez), who returns to his home state of Florida, then spirals into a wild adventure as he searches for a Philly mobster's runaway girlfriend.

If he could choose the perfect spot to film a Florida man vehicle, Pittman is quick to say his choice would be Pasco County, located on the Gulf Coast just north of Tampa and known for its nudist resorts, mobsters, and purely concentrated chaos energy.

"I am on the record saying Pasco County is ground zero for Florida weirdness," Pittman says. "There once was a group of Wiccans who got into a shootout with neighbors 'cause the neighbors thought they were Satanists."

Netflix did not respond to a request for comment via email from New Times, nor did the Town of  Carolina Beach return a voicemail left Tuesday.

Pittman suggests that the Netflix crew should come down south for a genuine on-location shoot.

"If you want your viewers to get an authentic Florida man experience, come to Florida," he says. "We have all the machetes you need."
KEEP MIAMI NEW TIMES FREE... Since we started Miami New Times, it has been defined as the free, independent voice of Miami, and we'd like to keep it that way. With local media under siege, it's more important than ever for us to rally support behind funding our local journalism. You can help by participating in our "I Support" program, allowing us to keep offering readers access to our incisive coverage of local news, food and culture with no paywalls.
Make a one-time donation today for as little as $1.