These Were Miami's Five Biggest Assholes of 2018 With that in mind, allow New Times to list the five biggest asshats in the Magic City (and the surrounding area) this year. They range from the hilariously un-self-aware to the potentially criminal to the dark and upsetting. May we all survive 2019 without hearing about any of these five people again. Jeff Greene with JP Morgan Asset Management CEO Mary Callahan Erdoes.
Financial Times / Wikimedia Commons
1. Jeff Greene. Palm Beach billionaire and 2018 gubernatorial candidate Jeff Greene made this year's list more for being dumb and rich than malicious and evil. Don't get us wrong: Greene is, ostensibly, not a good dude. He famously got rich during the 2008 housing crash. You know the film The Big Short, which details the of a bunch of crazy investors that the housing market would fail. They then got rich while everyone else went bankrupt and lost their life savings. That's basically Greene: He became a billionaire using techniques called "credit-default swaps" that essentially pay out money when banks fail. The Wall Street Journal once called him America's "meltdown mogul." That title should get him immediately put behind bars. Instead, Greene is trying his hardest to win elected office.

This year, for some utterly dumb and narcissistic reason, Greene thought he would make a good governor by virtue of being a rich idiot. (He previously ran for U.S. Senate in 2010 but got laughed out of that race too.) So he ran in the Democratic primary this year. He then proceeded to commit a series of unforced errors so blatant and dumb that we can only assume Greene is a gigantic moron. Most hilarious, he used his own, paid, Mar-a-Lago membership to create a campaign ad in which he said Donald Trump is, uh, abusing his Mar-a-Lago privileges. Shortly after the ad came out, reporters unearthed old footage of Greene praising Trump and saying he was behind Trump "100 percent" just after Election Day 2016. The hit pieces on Greene this year were brutal: The Intercept uncovered that Greene likely owns about $26 million in shady Puerto Rican debt obligations. Politico then learned that tons of people have sued Greene and that famous film director Ron Howard hates him.

Had Greene simply thought less of himself and not run for office, he could have spent a comparatively easy 2018 fishing in international waters with the exhumed corpse of Ernest Hemingway, or whatever else it is that billionaires do with their time. Instead, he ensured that we spent the year making fun of him. 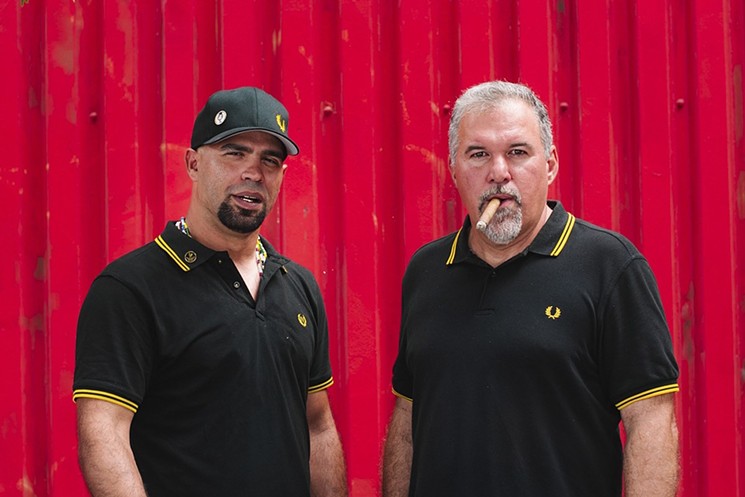 The leaders of the Miami Proud Boys, Enrique Tarrio (left) and Alex Gonzalez. See more of the Miami Proud Boys' social media posts here.
Photo by Karli Evans
2. Enrique Tarrio. In 2018, Enrique Tarrio went from a completely unknown, angry alt-right dude to the leader of a gang seemingly overnight. Tarrio is, at least as of this writing, the national chairman of the Proud Boys, a pro-Trump, admittedly sexist gang of sad, lonely wannabe men who enjoy fistfights and bonding over the fact that they never masturbate. The Boys used to be run by Gavin McInnes, the sad, seemingly lonely Vice magazine founder who quit the company so he could publicly be a huge asshole full-time. McInnes stresses that he is not a racist despite the fact that he has what a former white nationalist has said is a neo-Nazi band's logo tattooed on his body. (Update: After publication of this story, McInnes emailed New Times, called us "fucking retards," and claimed his fist-holding-a-lightning-bolt tattoo is "not unique" to the band Skrewdriver and that he "had no idea" that the band used the same logo.) This is similar to the overall Proud Boys M.O. The gang routinely stresses that it's not racist, but many members keep getting outed for having ties to harder-core white-nationalist groups. But we digress.

McInnes stepped down as the Proud Boys' leader this year after gang members were filmed beating the tar out of leftist protesters in Manhattan. A member named Jason Lee Van Dyke briefly took over for McInnes before Van Dyke himself stepped down two days later. He'd previously been arrested for allegedly falsely reporting one of his enemies to the cops and had separately been accused of making death-threats.

Miami's Tarrio then took his place. New Times spent months covering rise this year, and by all accounts, he seems like he isn't a great dude: He's divorced, was once convicted of motorcycle theft, and also spent time behind bars for selling stolen diabetic test strips. More to the point: Tarrio attended the 2017 Unite the Right white-nationalist rally in Charlottesville, Virginia, where a neo-Nazi murdered a . Tarrio now runs what is basically a fascist gang of angry, lonely, confused men. The only positive side to all of this is that the Proud Boys seem to be falling apart under his leadership. Sayoc
Via Twitter
3. Cesar Sayoc. This story is less haha-what-a-douchebag funny and more depressingly, frighteningly dark. Cesar Sayoc is, pretty clearly, not all there. He has a long history of arrests, dresses like a wacko, and was called a "weirdo" in the press by his former friends. Whatever malignancy existed in Sayoc's head before his arrest for sending numerous bombs, it came out in the form of senseless bullying and violence. According to the Miami Herald, Sayoc was once reported for allegedly throwing urine on a lesbian couple this past March.

Sayoc was ignorant and hateful enough to become a loyal passenger on the Trump Train when the reality-TV star announced his run for office in 2015. Internet memes seemingly poisoned Sayoc's brain. His van was covered in conservative bumper stickers, including some that put gun crosshairs over prominent liberals and Trump critics, including Hillary Clinton, Barack Obama, and George Soros. Sayoc then allegedly sent a bunch of potentially lethal pipe bombs to a bunch of people, including the CNN offices in Manhattan and even the home of actor Robert De Niro.

Unfortunately, Sayoc's arrest doesn't make anyone feel safer. If anything, his story proves the opposite. His case shows that the dark, deranged people hiding online, "joking" in forums about killing and posting death threats on social media are real, live nearby, and are capable of violence.

u/Urvice via Reddit
4. David Samson. Former Miami Marlins president David Samson was a late and somewhat surprising candidate for Miami's biggest asshole this year. He sold the team in 2017! He should be irrelevant. He ought to be off on a private island somewhere playing bongos with Richard Branson.

Instead, one of the people most responsible for stealing billions of dollars from City of Miami taxpayers now has a recurring slot on Miami ESPN host Dan Le Batard's multiple radio and TV programs. Samson, a very rich man, gets to follow up the time he spent demonstrably lying to the public as team president with a stint reviewing movies on Le Batard's new ESPN-backed podcast.

Is Samson at all apologetic about swindling the city? Is he worried that coming across like a possible white-collar criminal might hurt his brand or damage his buddy Le Batard's career? Nope. He showed up at Le Batard's December birthday party in a ridiculously shiny coat that might as well have been lined with $100 bills. He then took the mike, turned to the crowd, and said, "One-point-two billion! Fuck you!" before flipping off the booing crowd, and, by proxy, the city. He then tried to pass this stunt off as a gag. Hilarious, man.


Ex-Miami Marlins prez David Samson to taxpayers he scammed out of $1.2B to build ballpark: "Fuck you!" Now @CityofMiami is doing it again with publicly subsidized Beckham soccer stadium boondoggle. @GregCote, laughing in background, endorsed both deals. https://t.co/LooC0H9oAS pic.twitter.com/OOojiDzvUp Miami state Sen. Daphne Campbell
Florida House of Representatives
5. Daphne Campbell. Forget Donald Trump: Former state Sen. Daphne Campbell is the most gifted liar in America. Ask her a tough question on the phone? She'll claim she is not Daphne Campbell. Did she give an interview she regretted? She'll claim you made it up and/or stole her phone. Ask a tough question? She will call the cops on you, even if you are a journalist. Somehow she kept getting elected to state office despite being accused of committing a near-comical number of ethical breaches — to be honest, it's stunning she lost an election in 2018. But while we may miss her combination massage-and-Scientology-conversion events, Miami is better off without her holding office. People like Daphne don't stay quiet for long — she'll probably land a blimp in Bayfront Park in 2019, announce a campaign for mayor, and then immediately get arrested for filling the dirigible with stolen helium. Then she'll win the race. Such is the Daphne way.

At least she gave us this absolutely incredible 2018 campaign ad before she left: