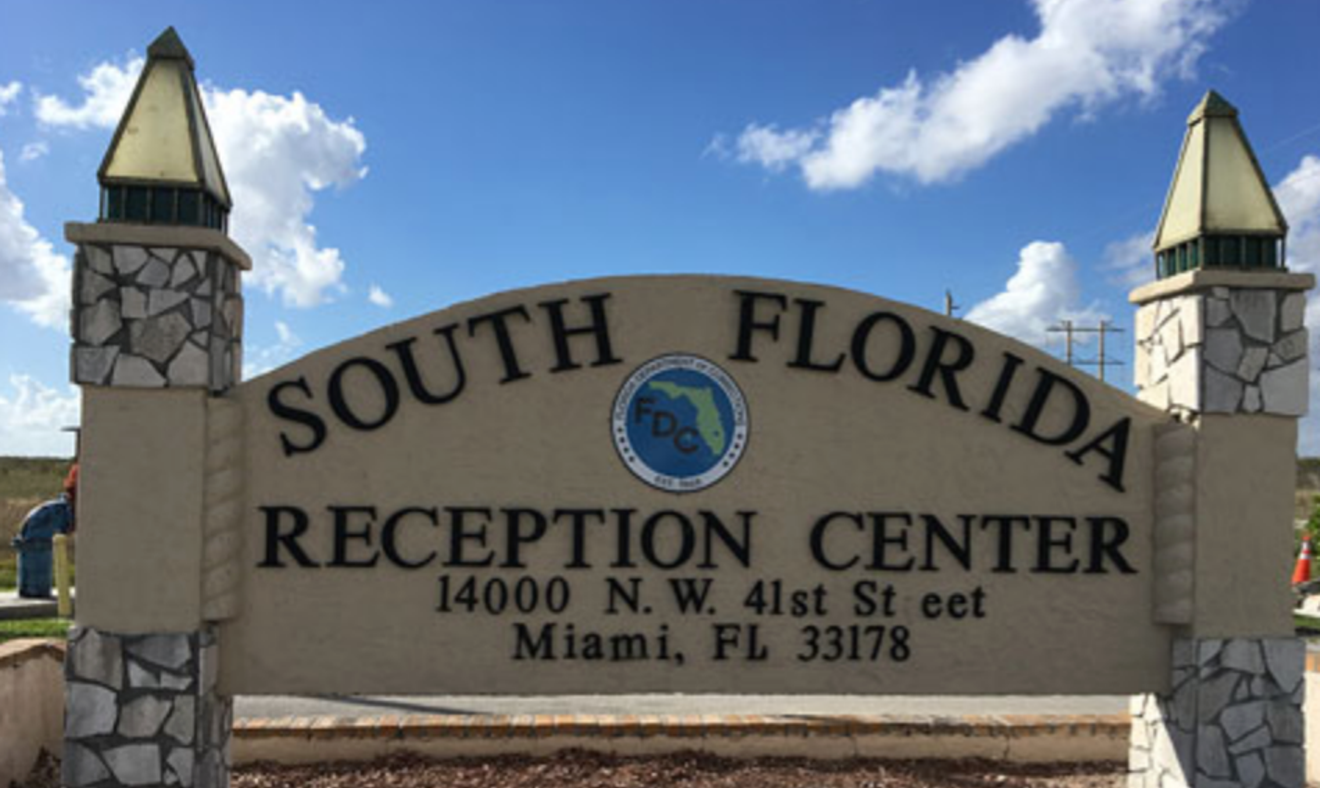 The South Florida Reception Center Florida Department of Corrections
In February 2016, state inmate Jimmy Jones had been temporarily transferred to the South Florida Reception Center, a prison facility west of Doral, for a medical visit. His mom came to visit February 20, and they met outside in a courtyard known as Visiting Park. Without much thought, Jones says he briefly tried on his mom's sunglasses as he ate lunch with his family. He didn't expect what would come next.

According to a lawsuit filed last week in federal court, a guard at the SFRC immediately walked up to Jones and ordered him to remove the sunglasses. Jones says he complied. Then, he says, the guard told him that once the visit ended, there was going to "be a problem" — which, it turns out, was a gang beating that knocked out three of Jones' teeth and ended with his being thrown in solitary confinement.

"They tore him up," Jones' lawyer, Faudlin Pierre, tells New Times. "He’s still missing his front teeth." Pierre says that his client had no prior history with the guards and that Jones maintained the attack was entirely unprovoked. He's suing the guards for excessive force.

(A spokesperson for the Florida Department of Corrections said the agency had not yet been served with the suit and therefore could not comment.)

But this isn't the first alleged gang beating at the SFRC. In December 2018, federal prosecutors accused two SFRC guards of shoving three youth offenders into a closet and using their fists and a mop handle to beat the young prisoners. The 2017 Miami Herald investigative series Fight Club detailed scores of similar abuses in the Florida prison system, including organized beatings and guards provoking fights by using honey bun pastries to bribe inmates. The series was a finalist for the Pulitzer Prize.

Per the latest suit, Jones demanded to speak to a shift captain after the first guard threatened him. The captain arrived but claimed Jones, who at the time was holding a soda and a sandwich, was a threat. The guards told him to turn around to have his hands placed in restraints. But as he was turning, he says, the guard pepper-sprayed him in the face without warning.

Then the beating allegedly began. The lawsuit says that the two guards "tackled Jones to ground, kneed him, kicked him, punched him, and physically assaulted him" and that "at no point did Jones resist." The attack lasted for ten minutes. After the men allegedly finished pummeling Jones, they handcuffed his bloodied, barely conscious body.

The guards then dragged him to a more secluded, sally port area and continued wailing on him. At this point, two other guards had joined in, and one of them allegedly smashed a radio into Jones' face. Jones says they threw him to the ground and began kicking. Someone's foot connected with his jaw and cracked three of his teeth. To add insult to injury, one of the men picked Jones up and spat on him after the beating subsided.

From there, the guards took Jones for a health exam. Prison doctors immediately took him to the infirmary and arranged for him to be sent to a hospital. There, he was sent to an oral surgery unit. Doctors removed his three cracked teeth from his gums.

Jones says that once he was taken back to the prison, the guards falsely blamed him for starting the attack. As punishment, he says, he was placed in solitary confinement for three years.

"I saw him a week or two after it happened. His face was still swollen from the beating he received," Pierre says. "They really did a number on him."
KEEP MIAMI NEW TIMES FREE... Since we started Miami New Times, it has been defined as the free, independent voice of Miami, and we'd like to keep it that way. With local media under siege, it's more important than ever for us to rally support behind funding our local journalism. You can help by participating in our "I Support" program, allowing us to keep offering readers access to our incisive coverage of local news, food and culture with no paywalls.
Make a one-time donation today for as little as $1.