Keith Allison via Flickr
Part of the attraction of sports is fans love to argue. Miami debates get extraspicy because of a definite us-against-everyone-else vibe. That is likely part of the reason Miami Heat fans have the most engaged online presence in the NBA. Miamians will bicker and scold their teams, but if other towns' fans come for them, they'll unite against the threat.

Locals puff out their chests and spout their opinions whether or not the teams are winning. It's just how we're wired.

Here are just a few of the things we argue about. Turn off the sports radio and scroll down.

Miami Dolphins quarterback Ryan Tannehill.
Photo by George Martinez
1. The great Ryan Tannehill debate. The Dolphins traded Tannehill to the Tennessee Titans this offseason, but fans will never forget him. The reason is not his play on the field — that was wildly inconsistent, and the team's best moments usually came when he was injured — but for the constant arguments about whether he was a trash quarterback.

There were seven seasons of in-house wrangling. Fists were pounded on tables and heads thumped against walls. Seemingly every Tannehill pass sparked a referendum on his entire career.

Goodnight, sweet Tannehill. We will miss you, if only because your inconsistency was a sideshow that kept us entertained during a string of lousy Dolphins seasons.

2. Has Pat Riley lost a step? The man some call "The Godfather" has shown some human-ish shot-calling since LeBron James removed his talents from South Beach back in 2014. Since then, Riley has made a mess of the franchise's checkbook. His decisions have prohibited the Heat from adding to its young core of Bam Adebayo, Justise Winslow, and Josh Richardson.

He signed nonstarter Hassan Whiteside to a max deal, broke the bank for since-traded Tyler Johnson, and seemingly bid against himself for an injured Dion Waiters and one-year-wonder James Johnson, to name just a few blunders. In addition, Riley was almost solely responsible for nearly making Dwyane Wade retire a Cleveland Cavalier, or worse.

Heat fans have noticed the fall from glory. We are back to those not-quite-good-enough Alonzo Mourning and Tim Hardaway teams of a quarter-century ago. If not for Dwyane Wade, many of Riley's credits would not exist. There is disagreement lately as to just how long is too long to let Riley chase his One Last Dance.

Photo by TechCrunch / Flickr
3. Everything Miami Marlins. Nothing unites Miami sports fans like firing off some mean tweets or unloading the Facebook comment clip at the Miami Marlins. Empty park pictures? "Hilarious, that's karma, buddy." Did a young player just hit a home run? "Can't wait to watch him on the Yankees in five years." Did someone just mention Derek Jeter's' name? "He's the devil Worse than Loria."

There are probably equal numbers of Marlins haters and Heat lovers. The arguing comes when level-headed people try to explain that Jeffrey Loria and David Samson are responsible for every tough decision Derek Jeter has had to make over the last two seasons. The pair, you see, ran a Ponzi scheme of bad business, back-loaded deals, and lousy relationships with fans.

Jeter and his team have had to treat the Marlins like an expansion franchise because of the prior owners' satanic ways. Some get that, others don't. Everyone will argue about it until Jeter is successful... or not. 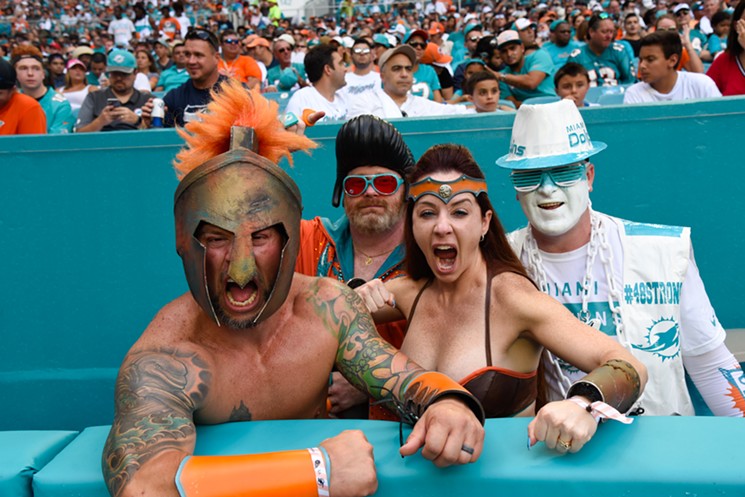 Photo by Michele Eve Sandberg
4. To tank, or not to tank. Miami sports fans will argue about this until the ocean swallows us. There are two types of Dolphins fans: those who support a full-fledged suck to get a great quarterback in next season's draft and the we-are-not-losers crowd. Everyone has an opinion here. If Dolphins fans try to tell you they are neither pro- nor anti-tank, they're probably just here for the tailgating.

There was a huge migration from the "not a fan of intentionally sucking" side to the "be bad for a season for the greater good" side after fans realized that a couple of extra wins in 2011 turned the opportunity to draft Andrew Luck into the mediocrity of Ryan Tannehill for seven seasons. Luck is a perennial MVP candidate these days, even with the shoulder issues that slowed him. Tannehill is now a backup for the Tennessee Titans.

If the prize at the end is Alabama quarterback Tua Tagovailoa, fans will never stop arguing about throwing away 2019.

Photo by Alex Broadwell
5. Love or hate: LeBron James. Some people just get over shit faster than others. Some hold onto hate for their ex long after a breakup; others move on within a week or so. With LeBron James, there is a segment of Heat fans that will never get over the fact he came to Miami, "used us" for four seasons, then moved his happy ass right back to Cleveland once his legacy was cemented by the two titles he won here.

#TeamPetty — those who will always root against LeBron not matter what — has lost members over the years. Many now appreciate what LeBron meant to the franchise. Others will fight the thought of retiring LeBron's number in Miami — or worse, building a statue.
KEEP MIAMI NEW TIMES FREE... Since we started Miami New Times, it has been defined as the free, independent voice of Miami, and we'd like to keep it that way. With local media under siege, it's more important than ever for us to rally support behind funding our local journalism. You can help by participating in our "I Support" program, allowing us to keep offering readers access to our incisive coverage of local news, food and culture with no paywalls.
Make a one-time donation today for as little as $1.