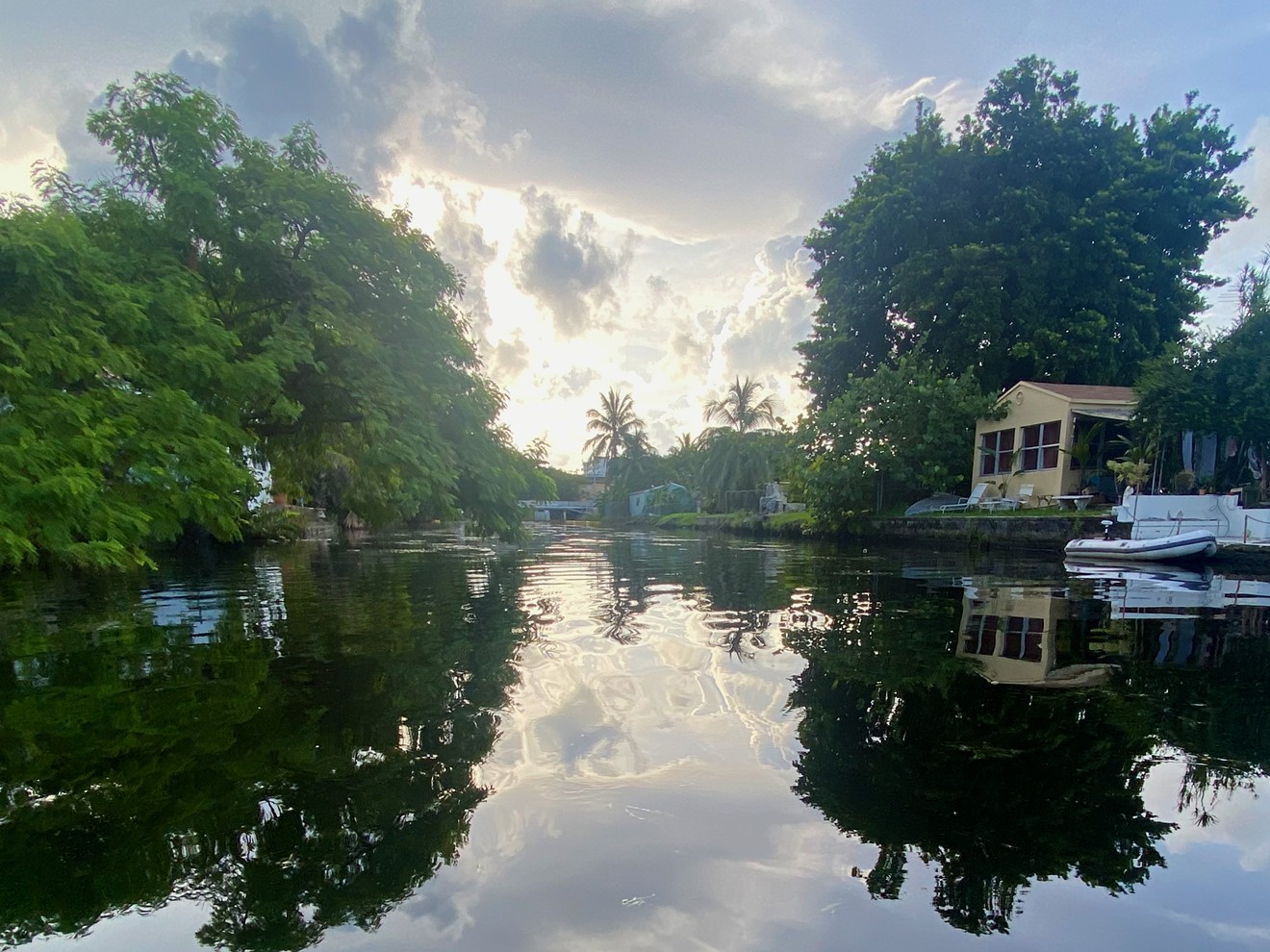 The South Florida Water Management District sprays herbicides along the Little River to prevent flooding. Photo by Adam Old
The Little River, one of Miami's oldest natural river systems, is home to a rich ecosystem of plants and wildlife. El Portal residents who live along the waterway have dubbed it Miami's "hidden gem," in tribute to its biodiversity.

To prevent overgrowth of the fertile foliage and tamp down invasive plant species, the South Florida Water Management District routinely sprays herbicides along the riverbanks. The rounds of chemical spraying are meant to keep the Little River clear of excessive vegetation, which can block the river or nearby canals, posing a flood-control risk.

While the district maintains the herbicide application is essential in managing the waterway, residents and conservation groups say the chemicals are destroying native plants, such as pond apple trees, and posing a threat to the local manatee population.

"They've been spraying as long as I've lived here since 2007," resident Adam Old tells New Times. "You end up with sort of obvious dead vegetation. All the leaves will fall off my leather ferns and cypress trees."

Resident Kay Hannesson, who has lived in El Portal for 19 years, says she's noticed herbicide applicators have been spraying excessively during the summer rainy season, only to see downpours quickly wash the chemical deposits into the river.

"We have to try and get that stopped or at least ask them to wait until they see a problem before they come out and start spraying," Hannesson tells New Times. "Why are we spraying when there's no problem? The waterways are wide open."

The Little River stretches for 12 miles through a northern portion of Miami, as well as El Portal, Hialeah, and unincorporated Miami-Dade County. It carries its debris and contaminants eastward into Biscayne Bay, which has been increasingly under threat over the past decade by climate change and pollution.

Hoping to preserve the river's ecosystem, Old teamed up with fellow residents Kristen McLean and Hugh Gladwin to create the Little River Conservancy, a nonprofit dedicated to education and advocacy around restoring the waterway.

"I would be really happy if we could get an agreement to actively foster and protect native [species] along the river and could get people to not do spray removal," McLean says. "Just come to a better solution than this."

The conservancy has launched a campaign urging residents along the river to place wood signs in their backyards to curb the spraying. The district vows to not spray on private property if there is a sign prohibiting it, though McLean claims that the promise is not always honored.

South Florida Water Management District spokesman Jason Schultz tells New Times the district is reducing its use of herbicides and "opts for other methods of removing hazardous vegetation when possible and feasible." The agency's routine maintenance of waterways includes mechanical removal of vegetation, controlled burns, and limited applications of EPA-approved herbicides, he says.

The district supplied a list of herbicides applied around the Little River, which include Roundup Custom, Pathfinder II, Element 3a, Ecomazapyr 2 SL, AquaNeat, and Polaris.

Pathfinder II uses a triclopyr ester that is "highly toxic to aquatic organisms," according to a manufacturer data sheet. Roundup Custom and AquaNeat contain the active ingredient glyphosate, which has been linked to non-Hodgkins lymphoma.

The district says it closely follows manufacturers' application guidelines to "reduce the risk of any impacts to the water and to wildlife."

Hannesson and her fellow residents are especially concerned about the application of herbicides containing glyphosate in light of research that shows it may increase the risk of certain cancers in humans. In 2019, the City of Miami joined Miami Beach in banning glyphosate-based compounds on municipal property.

In addition to fears over herbicide pollution, environmental advocates say the Little River, like many Florida waterways, is plagued by nutrient contamination.

As Miami Waterkeeper executive director Rachel Silverstein explains, the river can become overrun with fertilizer and sewage, which it carries into Biscayne Bay, fostering harmful algae blooms. The algae lower the water quality and cloud the bay, making it more difficult for seagrass to survive.

Some parts of the bay have lost nearly 90 percent of their seagrass, according to Miami Waterkeeper.

The decimation of seagrass beds, manatees' main source of food, has been cited as a contributing factor in the alarming die-off of Florida's manatee population over the past two years. In 2021 alone, 1,101 manatees died throughout the state, many from starvation or trauma from boat strikes. That figure eclipsed the five-year average of 625 deaths. As of August 12, 661 manatees have died in Florida since January.

Silverstein suggests overzealous herbicide application could worsen the cycle of seagrass death by contributing to deposits of decomposing plant material in the water.

"The water that's going into Biscayne Bay is essentially killing seagrass and harming wildlife," Silverstein says. "We're in a real emergency with our seagrass levels. Manatees are literally starving and here we are dumping herbicides that are getting into the bay. It's a really detrimental practice."

Manatees' chronic exposure to herbicide compounds is also a growing concern among marine biologists. A recent study showed that out of 105 manatees surveyed, more than half were found to have glyphosate in their bodies. Exposure to the compound was heightened during the Florida sugarcane harvest owing to larger amounts of chemical runoff from farmland.

Research is ongoing to pinpoint what health effects manatees may be experiencing from swimming in water with elevated herbicide levels.

In a statement, the Florida Department of Environmental Protection maintained that water samples taken over a three-year period around the Little River beginning in 2019 showed that glyphosate levels were barely detectable.

Still, as ecological challenges mount around the river and manatees continue to perish at alarming rates,  Silverstein believes waterway management should focus on processes that work with nature rather than against it.

"What has worked in the past 50 years is not necessarily gonna work for the next 50 years," she argues. "We need to do mechanical removal and figure out if there are some kind of natural habitats that can live in the banks without presenting flood control issues."
KEEP MIAMI NEW TIMES FREE... Since we started Miami New Times, it has been defined as the free, independent voice of Miami, and we'd like to keep it that way. With local media under siege, it's more important than ever for us to rally support behind funding our local journalism. You can help by participating in our "I Support" program, allowing us to keep offering readers access to our incisive coverage of local news, food and culture with no paywalls.
Make a one-time donation today for as little as $1.