Homestead Temporary Shelter for Unaccompanied Children Photo by Joe Skipper / Getty Images
Rumors have swirled for weeks that the Homestead Temporary Shelter for Unaccompanied Children, the largest detention center for migrant kids in America, might be closing permanently. Mere months ago, the facility held roughly 3,000 children, but in recent weeks, it has rapidly slashed its population.

Now, New Times can confirm that, as of this morning, the facility held just 774 children — 258 girls and 516 boys. New Times obtained a series of internal population spreadsheets from the facility, including some created by Caliburn International, the for-profit company that operates the migrant camp.

More worrying: Additional spreadsheets show that, of the 774 kids, 400 of them were aged 17 or older and are in danger of being transferred to adult Immigration and Customs Enforcement detention centers. Last year, New Times first reported that when kids at Homestead turn 18, they are handcuffed on their birthday and transported to the Broward Transitional Center, an adult ICE detention facility in Pompano Beach, where they are then placed into deportation proceedings. Lawyers say the practice violates federal law. (Last week, Amnesty International called the Homestead detention center a human-rights violation.)

New Times independently verified the veracity of the documents, and a reporter who visited the compound in February saw the same spreadsheets on computer screens at the facility. Although the spreadsheets do not list the names of the 17-year-olds, the files include the children's ages and the number of days they've been detained at the Homestead center. Of the 400 kids, a significant portion has been keep at the facility for more than 80 days, and ten children have been there for more than 100 days. A few kids are mere days from turning 18 — one child, listed as "17.99 years old," has been inside the camp for 103 days.

The data shows that, in total, 121 kids have "aged out" of the compound and been placed in ICE custody. 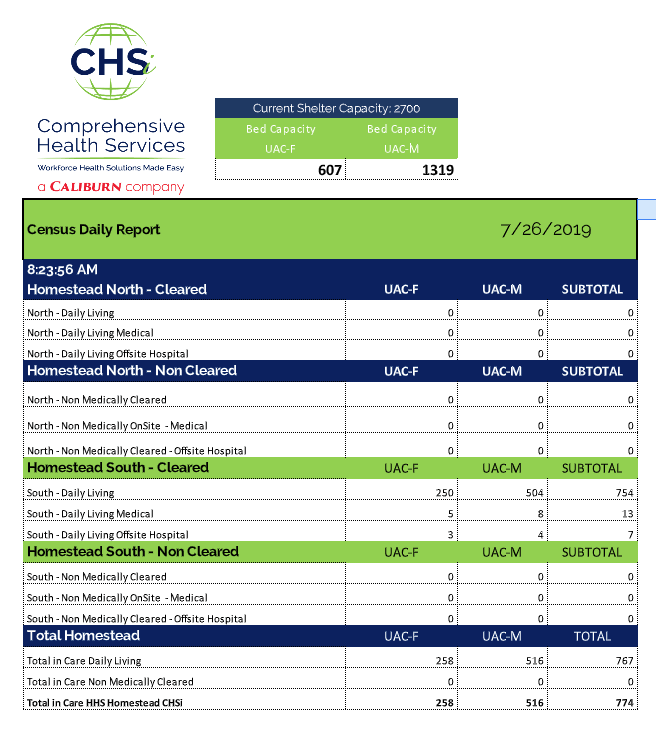 Caliburn International
The documents also show that the facility continues to shed kids at a rapid clip. This past July 24, Miami Herald reporter Monique Madan tweeted that the population had shrunk to 894 kids and that the U.S. Department of Health and Human Services (HHS) says it hopes to do away with all "temporary influx shelters" such as Homestead by 2020.


The government says it hopes to do away with all temporary influx shelters – like the Homestead detention center – by the end of 2020. @MiamiHerald

This is consistent with our reporting, which says Homestead won't shut down for a while, if it does.

Even still, rumors continue to swirl among immigrant-rights activists that HHS might be pushing to close Homestead even faster than has been publicly announced. Spokespeople for HHS said they could not immediately respond to messages from New Times today about the population count or what the future holds for the migrant encampment.

The facility is also shedding kids because it simply held too many to safely accommodate during a hurricane. For months, the Miami Herald reported that Homestead Congresswoman Debbie Mucarsel-Powell has tried in vain to obtain any concrete explanation of what the compound's hurricane-preparedness plan looks like. But last month, New Times reported that the facility can only hold 1,200 kids safely in a low-level storm. HHS, which previously claimed it can take quite a long time to reunite children with their familial sponsors, says the vast majority of kids removed from Homestead suddenly have been released to their families.

Reached by phone, Tomas Kennedy of the Florida Immigrant Coalition said his organization is deeply worried about what might happen to the remaining 400 kids who could age into deportation proceedings. Kennedy said his organization has already been holding rallies, news conferences, and protests outside the compound and has been coordinating with Mucarsel-Powell's office to try to raise awareness about what's happening at the center. Now, he says, the coalition of organizations he works with wants to make sure these remaining 400 children don't wind up in adult ICE detention facilities.

"We’re super-concerned right now," he says. "The facility is clearly winding down at least the number of children who are detained, likely because it's hurricane season and they are not prepared to take that many kids as it is. But we're concerned what’s gonna happen with these kids, where they’re gonna end up, and why they haven’t been reunited with sponsors. These are 17-year-olds, and they're at risk of being transferred to adult detention."
KEEP MIAMI NEW TIMES FREE... Since we started Miami New Times, it has been defined as the free, independent voice of Miami, and we'd like to keep it that way. With local media under siege, it's more important than ever for us to rally support behind funding our local journalism. You can help by participating in our "I Support" program, allowing us to keep offering readers access to our incisive coverage of local news, food and culture with no paywalls.
Make a one-time donation today for as little as $1.