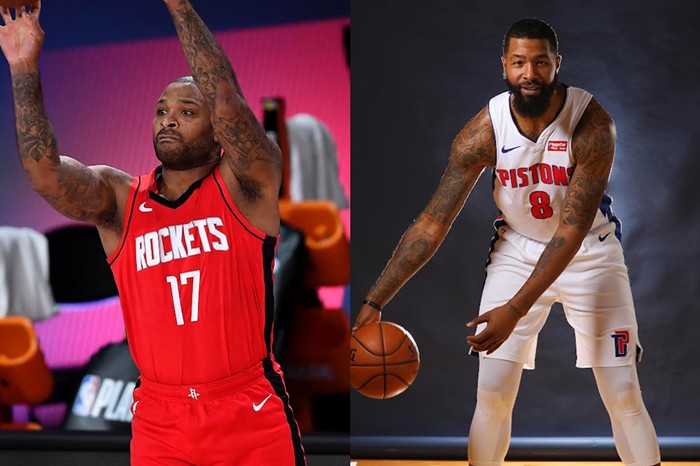 P.J. Tucker (left) and Markieff Morris (right) are the Miami Heat's newest members.
Photos by Douglas P. DeFelice/Getty Images, Gregory Shamus/Getty Images
The Miami Heat is under construction. Please excuse the mess as the team banks on the fact that all these changes will be worth the inconvenience in the regular season.

The NBA offseason has always been considered the most intriguing in sports. The downtime between games that count is annually jam-packed with transactions, rumors, signings, trades, dram, and shenanigans that keep us entertained.

The past few months were no exception, as the Heat basically remodeled their entire roster, stripping the drywall, tearing out the bathroom tiles, and recreating what, in the end, certainly seems like a better-looking squad.

So, as with any remodel that's meant for a quick flip, let's open the doors and take a tour. It's time to get to know two of the Miami Heat's biggest offseason acquisitions: P.J. Tucker and Markieff Morris.

P.J. Tucker has so many shoes that they have their own house and social media accounts.


When the NBA was forced to finish its 2020 season in Orlando, P.J. Tucker needed to pack for an open-ended stay. So, like any normal human being, he brought 110 pairs of sneakers.

Bruh. What? Yes. You read that right. Tucker brought enough sneakers with him to Orlando to wear multiple pairs each day he was there. It may seem like a lot, but Tucker's collection is said to top 5,000 pairs.

How many shoes is 5,000? Enough to warrant an entirely new house, just for them.

P.J. Tucker has the sickest chain you've ever seen.

Athletes have flexed chains with more ice on them, but P.J. Tucker's necklace bearing his son's image may take the cake as the dopest thing we've ever seen. Tucker's jeweler somehow brought an emoji of his son into the physical world so he can wear the kid's likeness around his neck at all times.

My dad carried a photo of me in his wallet. P.J. Tucker wears this. Times have certainly changed.

The man loves his avocado toast.

P.J. Tucker says the secret to his success is his routine of ingesting a huge helping of avocado toast before every game. He says he used to be a big pancake guy and always laughed at his wife and nanny for eating avocado toast, but one day he tried it and was hooked.

It takes him an hour to get ready before a game.


Outside of his sneakers, Tucker is also a fashion connoisseur. He might show up to a game wearing incredible rare sneakers and clothing from Tom Ford,  Bode, Jay Kos, Sacai, or Pyer Moss. Most of the time, photos of him end up on social media platforms that care nothing about basketball but are just there for the fashion flex.

His path to the NBA was extremely unorthodox.

P.J. Tucker was more than a solid college player at Texas. His junior year he was named a second-team All-American and the Big 12 Conference Men's Basketball Player of the Year. Tucker played well enough that he was selected by the Toronto Raptors as the 35th pick in the 2006 NBA Draft.

Then he was out of the NBA. For years. Until the Phoenix Suns gave him a chance to make the team in 2012. From there, he transformed into the hard-nosed player coming off playing a big role on a championship team. The Heat signed him this offseason.

Marcus and Markieff Morris aren't identical twins, but their tattoos are.

The newest Heat player, Markieff Morris, and his twin brother, Marcus, are fraternal twins. What is identical about them, though, is their tattoos. All of them. Exactly the same. All with specific meanings to the brothers.

We'll need to get an up-the-the-present count on how many identical tattoos the pair have once they speak with the media in Miami. At last count, the number was 27. One of the most prominent tattoos the pair have is of the Philadelphia skyline, representing the city in which they were born. Talk about brotherly love.

The Morris brothers once famously signed a joint contract with the Phoenix Suns worth $52 million over four years. Joint literally meaning joint. The twins got the money and decided among themselves who got what. This is not normal. This does not happen. It only happens with the Morris brothers because after sharing a womb the next logical step is to share money, all of it, so it doesn't matter.

Markieff ended up with $32 million over four years, while Marcus took $20 million over the same amount of time. This will likely never happen again until a married LGBT couple signs with the same team.

Markeiff and Marcus were drafted back-to-back in the 2011 NBA Draft.

Honestly, this is getting weird. It's one thing to be twins and both make the NBA. It's another thing to eventually sign with the same team. But it's an entirely different — and insane — thing to see twins drafted with back-to-back first-round picks.

In 2011, the Phoenix Suns took Markeiff 13th. The very next pick, the Houston Rockets took his brother. The pick after that? Kawhi Leonard. Woof!

Both Markieff and his brother Marcus often post "FOE" — an acronym for Family Over Everything — on social media. The twins also have those three letters tattooed on themselves. Yes, both of them. We've been over this.

Looking over their social media accounts, it's clear Markieff is a family man. He should fit right into the Miami Heat culture.

He's a champion, too.

An underrated aspect of the Miami Heat's offseason acquisitions is that they have all recently won a championship. From Kyle Lowry to P.J. Tucker to Markieff Morris, the pedigree of a champion has been added to a roster that, outside of the rings Udonis Haslem holds, lacks that.

Morris won a championship with LeBron James in Los Angeles against the Miami Heat in 2020. His leadership, alongside the other NBA champions, should give the Heat something they've been sorely lacking the last two seasons.
KEEP MIAMI NEW TIMES FREE... Since we started Miami New Times, it has been defined as the free, independent voice of Miami, and we'd like to keep it that way. With local media under siege, it's more important than ever for us to rally support behind funding our local journalism. You can help by participating in our "I Support" program, allowing us to keep offering readers access to our incisive coverage of local news, food and culture with no paywalls.
Make a one-time donation today for as little as $1.