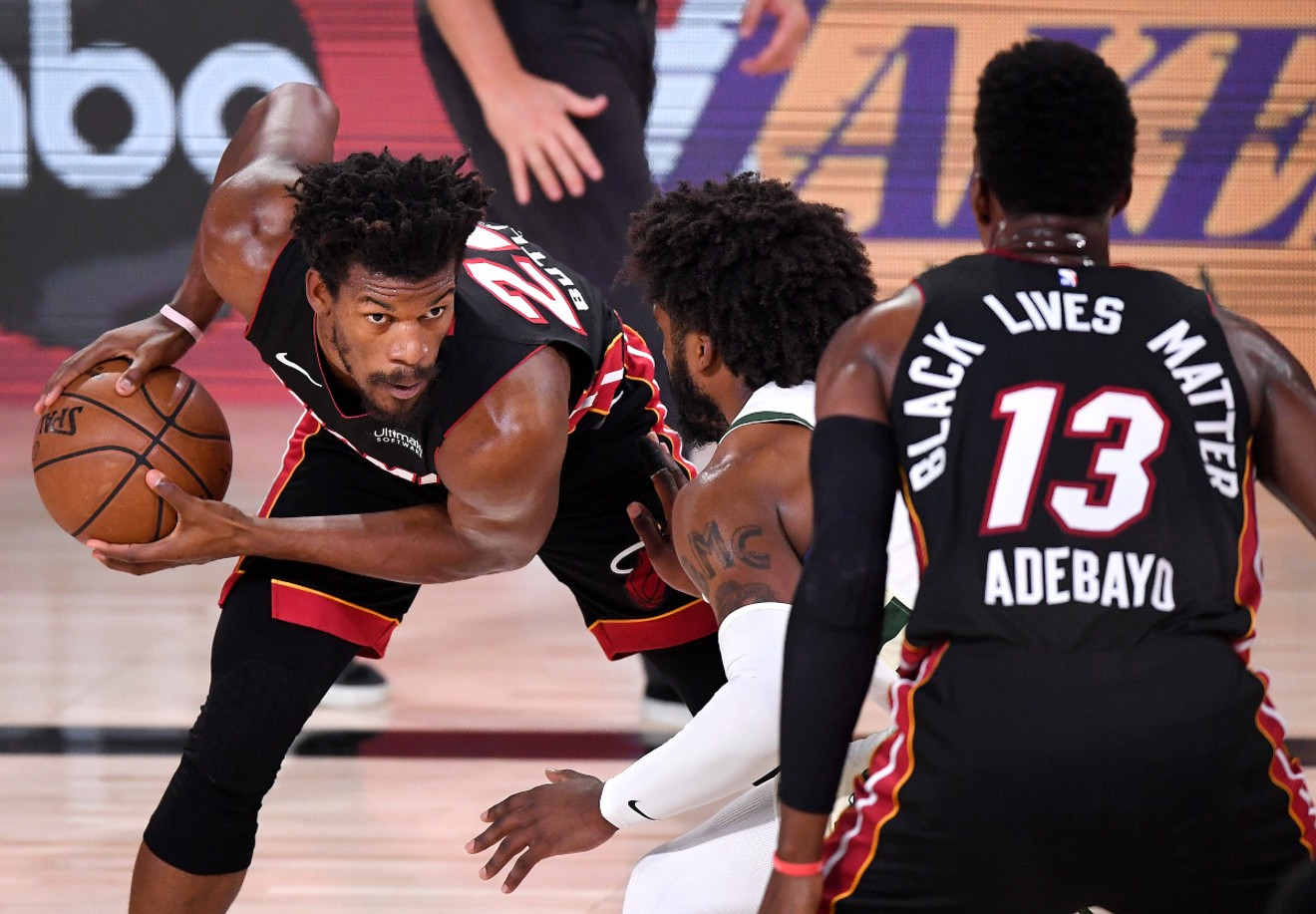 The Miami Heat has become a title contender in under a year. Photo by Douglas P. DeFelice/Getty
If we're being honest, it was always meant to be this way. No Miami Heat championship run would be complete without first personally disposing of the Boston Celtics. It's practically a tradition around these parts.

Tonight, when the Heat and Celtics kick off the Eastern Conference Finals with Game 1 inside the Orlando NBA bubble, the Heat will get its chance to check the Celtics-getting-their-asses-sent-home square on the team's NBA title bingo card.

There is no love lost between these two teams. The history of beef is well documented.

It seems like an insurmountable task for a Miami Heat fan to choose their favorite reason to hate the Boston Celtics, but we're here to help.

Here are ten reasons Heat fans notoriously hate the basketball team from Boston. Choose your favorite reason to hate the Boston Celtics below, and let's ride.
Paul Pierce is the worst. Former Boston Celtics mediocre Paul Pierce once shit himself while playing in an NBA Finals game and called for a wheelchair to get him out of the situation. That happened. It's on the internet. That means it's true. I don't make the rules.

Paul Pierce is so salty that the Miami Heat completely owned him his entire career that he trashes the team every chance he gets as an analyst on ESPN. He was a fantastic reason to hate the Celtics as a player, but knowing it would twist a knife in his precious Celtics-fan heart if Miami beat Boston is just as enticing a reason to want it to happen.
Heat president Pat Riley and Celtics president Danny Ainge have a running feud. One of the most memorable moments from the LeBron James/Miami Heat days was the time when Danny Ainge decided to talk spicy about the Miami Heat, and Pat Riley clapped back in an immediate and epic way.

The above video will go down in Miami Heat history. Some rivalries are fan-made. Some are really real. Boston and Miami hate each other from the top down to the bottom.
Celtics fanboy Bill Simmons. If you know nothing else about why Miami Heat fans hate the Boston Celtics, spend ten minutes listening to Bill Simmons speaking. If you can make it through all ten minutes, you'll fully understand why sending Simmons' favorite team home from the playoffs never gets old.

Simmons has a long history of whining about how good the Heat are despite doing things the wrong way. Sticking it to him this season would be the ultimate revenge.

Marcus Smart. Marcus Smart will somehow find a way to get into a fight with a Miami Heat player during this series. Book it. It's what he does. I predict Goran Dragic and Marcus Smart get ejected from a game, for sure.

Smart is the type of player you love if he's on your team but hate if he's on the other side. The fact that he's on the other side and he's a Boston Celtic almost makes your head explode if you're a Heat fan.
Brad Stevens is the Amazon Basics version of Erik Spoelstra. For years, we've heard how great wonderboy Brad Stevens is at coaching. Some have even called him the best coach in the NBA. Yet in his seventh season as coach of the Celtics, he has exactly as many championship rings as you do. He's never even coached a game in the NBA Finals. Meanwhile, Erik Spoelstra, a three-time NBA champion and Hall of Fame coach, constantly gets downplayed and forgotten as one of the greatest coaches in all of sports.

Boston bias. It's a real thing.
Kevin Garnett is still salty about the Miami Heat ending his Celtics career. A long, long time ago in the year 2019, Kevin Garnett went on Bill Simmons' podcast and revealed he is and will always remain big mad about the LeBron James-led Miami Heat beating his Celtics team so bad that they traded everyone to the New Jersey Nets.

On the podcast, Garnett made claims about the NBA "having an agenda" against the Celtics, implying there was some deep-state mission to get LeBron to the NBA Finals. Cool story, KG.
Celtics fanboy Tommy Heinsohn. Longtime Celtics announcer Tommy Heinsohn has never heard of the "no cheering in the press box" rule. He does what he wants. He complains all the time. And he awards "Tommy points" to players who make plays that please him.

He's the worst. If you hate the Celtics, this is the voice you think of. You can picture overhearing 20 Tommy Heinsohns complaining about the Red Sox losing to the Yankees at an Irish pub outside Fenway.
Boston sports fans are spoiled, yet all they do is complain. For years, everyone had to hear about the Boston Red Sox not winning a World Series for 86 years. Then they won it. Four times.

The New England Patriots have dominated the NFL for two decades, only now losing Tom Brady and, possibly, a grip on the AFC. Yet all you hear about is how the NFL and commissioner Roger Goodell are so unfair and mean to them.

So when it comes to the Boston Celtics, nobody wants to see them and their fans happy. It's overkill.

Boston is the antithesis of Miami. The cities of Boston and Miami mix like oil and water. There is nothing alike about these two places. Miami is a melting pot of different people from different places, while Boston has a reputation of, let's just say, not those things.

Miami and Boston could not be more different. Both cities like it that way.


Why do Celtics fans mention 17 titles when Raps fans talk about last year's win? I mean theyve won only 1 in the last 35 years lmfao. And the Raptors have been an organization for 25 years...

The Boston Celtics think they're basketball royalty. The Miami Heat has won three titles in the last 14 years and seen a great deal of success pretty much constantly over the last 30 years. The Boston Celtics have one title to their name since the Miami Heat came into the league in 1988 and have stunk plenty between now and then.

Somehow, some way, the Celtics believe they're America's team because they won a bunch of titles in short-shorts on black-and-white TVs. They're worse than Dolphins fans who brag about being the best team in the '70s.
KEEP MIAMI NEW TIMES FREE... Since we started Miami New Times, it has been defined as the free, independent voice of Miami, and we'd like to keep it that way. With local media under siege, it's more important than ever for us to rally support behind funding our local journalism. You can help by participating in our "I Support" program, allowing us to keep offering readers access to our incisive coverage of local news, food and culture with no paywalls.
Make a one-time donation today for as little as $1.