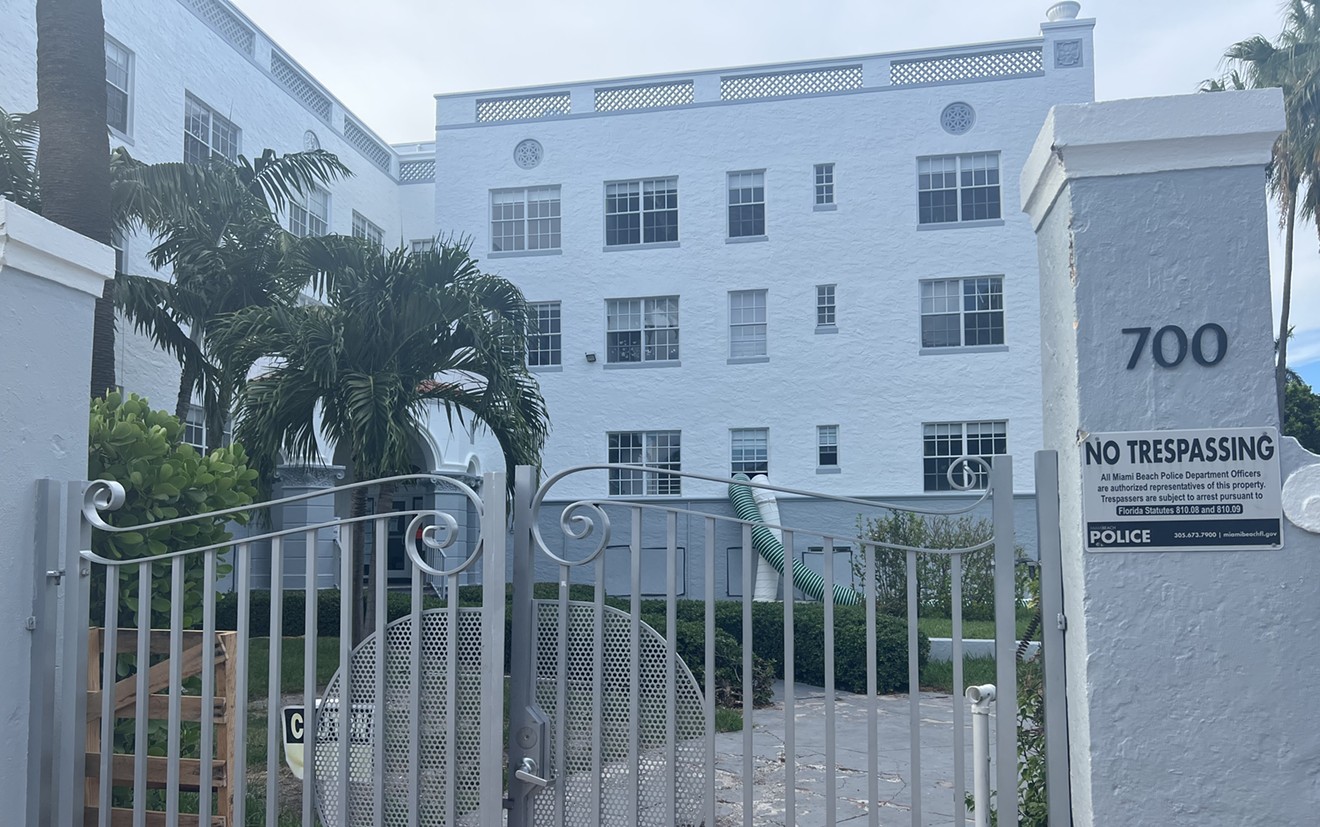 Following a partial ceiling collapse and a water leak near the building's main electrical system, the city posted an unsafe structure notice on June 14, and all tenants were forced to evacuate. The property owner, Sentinel Real Estate Corp., terminated their leases and told them they had to move out of their apartments by July 8.

Interviews with former residents and public documents reviewed by New Times indicate that 700 Euclid had been deteriorating in recent years due to widespread water damage. The property was passed from owner to owner as the city issued a multitude of code violations against the dilapidated building.

It's an evermore familiar tale in Miami Beach as the city's historic buildings age, with some approaching the 90- or 100-year mark. Just this year, the fire-damaged and hurricane-ravaged Deauville Beach Resort, a North Beach icon closed since 2017, headed into the demolition process after the city deemed the building to be unsalvageable.

According to Miami-based historian Casey Piket, historic Miami Beach buildings are being sold to well-funded developers who are eyeing the valuable land and development possibilities and have little interest in preserving the history of the city. Throughout Miami-Dade County — from Brickell along historic South Miami Avenue to districts in South Beach — developers who take over historic sites often favor redevelopment of the properties into upscale, modern buildings.

"It's quite interesting that somebody spent so much money for what was in a sense being used as workforce housing," Piket says of the Annell building. "The purchase price over the course of the last 20 years has been amazing, and I am sure that the people that purchased it just looked at the land and said there's a lot more value to the land versus what's sitting there today."

"We think that there should be incentives or should be more strict requirements to maintain these buildings because generally, the most affordable and the greenest building is the one that's there," he says. 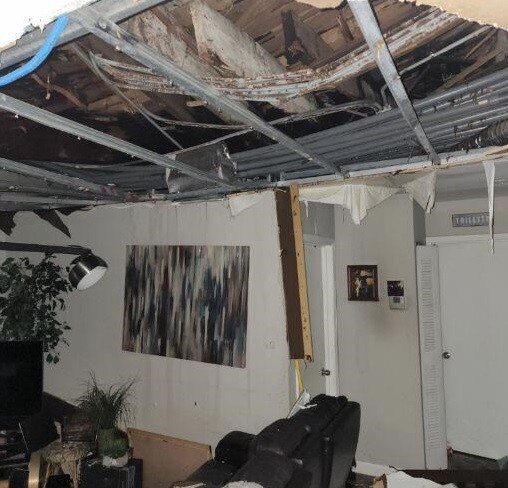 The apartment building at 700 Euclid fell into a state of disrepair in recent years.
Photo by Annell building tenants' association
The building on 700 Euclid Avenue opened as a posh 74-room hotel in 1935. As Piket described on his Miami History blog, architect Henry Hohauser designed the property in a Mediterranean style, a departure from his Art Deco and Streamline Moderne approach, which can be seen throughout Miami Beach. (An annex was later added, incorporating Art Deco architecture at 700 Euclid.)

"What's important about this building is that it was built as [Miami Beach] was transitioning from more of that Mediterranean style that was very popular in the 1920s to Streamline Moderne," Piket tells New Times.

As the nation was coming out of the Great Depression in the 1930s, the Annell became a popular hotel destination for tourists visiting Miami Beach.

"Miami Beach really presented a place for people to go, especially as Europe was being ravaged by war," Piket adds. "It represented sort of that transition period of what Miami Beach had become, from an almost exclusive resort to an area where everybody can vacation."

During World War II, the U.S. Army Air Corps leased the hotel to house trainees. The building subsequently went back to operating as a hotel until 1989, when it was converted into a 54-unit apartment building.

Piket wrote that the sale price soared from $3.45 million in 2010 to $15.3 million when an entity called BP 700 LLC purchased the property in February of 2016. The most recent acquisition came in April 2021 when New York-based Sentinel Real Estate Corp. bought the building for $11.9 million as part of a $96 million expansion in Miami. 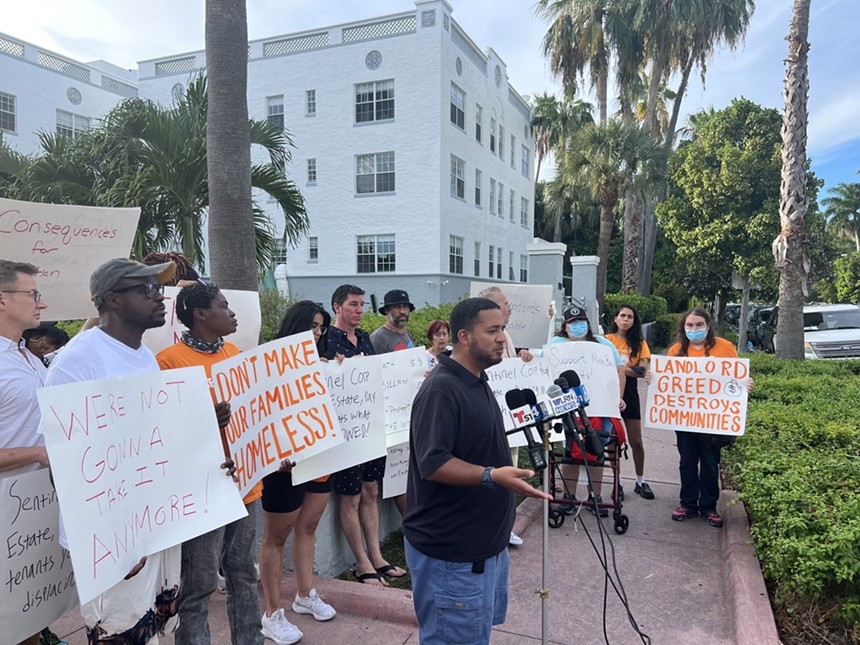 Former tenants of 700 Euclid Avenue protest outside the building after their leases were terminated due to an unsafe structure violation.
Photo by Naomi Feinstein
New Times has interviewed several former tenants and scoured years of code violation documents, all of which have revealed that the Annell building has long been in a state of decay. Miami's tropical climate and heavy rainfall have been eating away at the structure, and repair attempts have not kept up with the gradual dilapidation.

There have been severe, recurring issues with flooding inside the structure. Water damage from storms has been extensive and worsening in recent years, and drainage problems have persisted around the building.

In the past five years, the building was the subject of at least two unsafe-structure citations.

In June 2017 (nearly five years ago to the day the building was shuttered), the City of Miami Beach issued a citation to then-owner BP 700 LLC for work done without a permit, and for pervasive water damage around the building. The code violation case dragged on for years.

When former tenant Troy Kurtz moved into the building in March 2020, he noticed the lobby was sinking. Within his first week of living there, his unit, along with others on the first floor, flooded. He tells New Times floods occurred frequently and that the manager at the time, Urban Resource, did not do enough to mitigate the issue.

In July 2021, parts of the kitchen counter collapsed in apartment 100, which the tenant claimed was not timely repaired. Around that time, several tenants were complaining of water leaking through ceilings and windows every time it rained, as well as black mold. In the two years preceding the building's shuttering, tenants reported extended blackouts and an elevator that was out of service for almost a year.

Public records indicate the building was found to be in violation during 28 unsafe structure inspections dating back to 2017. One structural condition assessment from July 16, 2021, found cracks in the building's facade and signs of water damage in apartment ceilings.

The final straw came with the ceiling collapse in apartment 106, which led to the unsafe-structure notice on June 14.

After their displacement, the tenants formed a tenant association and demanded compensation from Sentinel as well as action from the City of Miami Beach. They protested outside the building, calling for reimbursement of moving expenses and other costs.

Sentinel paid for tenants' accommodations in the immediate aftermath of the evacuation, as required by a Miami Beach ordinance. It offered payment for moving expenses, but some tenants declined, claiming the offer was unfairly conditioned upon a waiver legal claims against the company.

The company has not responded to New Times' request for comment on future construction plans for the site.

A source with knowledge of the building's repair history said 700 Euclid had major issues before Sentinel acquired it. The source said the elevator was in a state of disrepair when Sentinel took over, and that it took time to acquire the necessary replacement parts. She says Sentinel completed all of the exterior repairs required by the city and ordered new windows for the building, in addition to repairing two parapet walls. 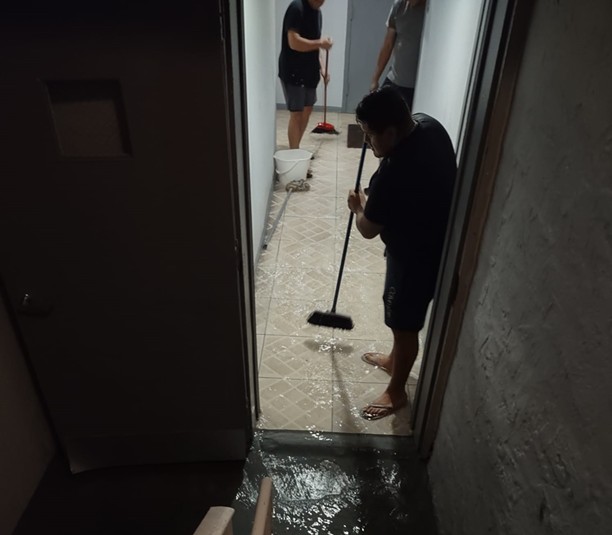 Ciraldo of the Miami Design Preservation League tells New Times proper long-term building maintenance should have prevented the Annell from falling to pieces.

"We get into situations like this [where] tenants are the victims, and these well-capitalized investment groups really have no excuse," Ciraldo says. "These buildings should be properly maintained and should be given the respect that they deserve not just for what's on the outside, but for the folks living inside."

Piket adds that it's "not uncommon throughout Miami's history" that developers buy property and then let it go through the "process of demolition by neglect."

Sentinel denies that it took that route. In the short time it owned the building, the company says, it tried to make necessary repairs and resolve outstanding code violations.

The city's historic preservation board must approve permits for demolition and major construction at historic buildings unless there is an immediate threat to public health or safety. If a building is condemned due to neglect, a Miami Beach ordinance requires the new structure to "incorporate the same height, massing, and square footage of the previous structure on site." The regulation is meant to ensure property owners cannot skirt preservation law by letting buildings fall into disrepair and then tearing them down.

However, Piket, among other preservationists, argues that the board does not go far enough in protecting historic buildings, and that it needs to be more aggressive in fining owners for negligent maintenance. According to Miami Beach records, recent owners of 700 Euclid received no historical-preservation fines despite five years of consistent code violations.

Piket says buildings like 700 Euclid play a vital role in driving tourism in Miami Beach as people from all over the globe come to visit the city's historic districts. If the old architecture is erased, the city will lose "a very big piece of the value of what South Florida represents," Piket says.

The historian fears investment groups may aggressively target older properties in Miami Beach for major redevelopment similar to what they have done in Brickell along historic South Miami Avenue.

"It's almost to a point where you need to strip the word historic from that avenue," he says. "It had a lot of history, but you wouldn't know it by taking a look at it today with all the changes going on there. The same thing could start to happen in the Art Deco District. In South Florida, money talks."
KEEP MIAMI NEW TIMES FREE... Since we started Miami New Times, it has been defined as the free, independent voice of Miami, and we'd like to keep it that way. With local media under siege, it's more important than ever for us to rally support behind funding our local journalism. You can help by participating in our "I Support" program, allowing us to keep offering readers access to our incisive coverage of local news, food and culture with no paywalls.
Make a one-time donation today for as little as $1.