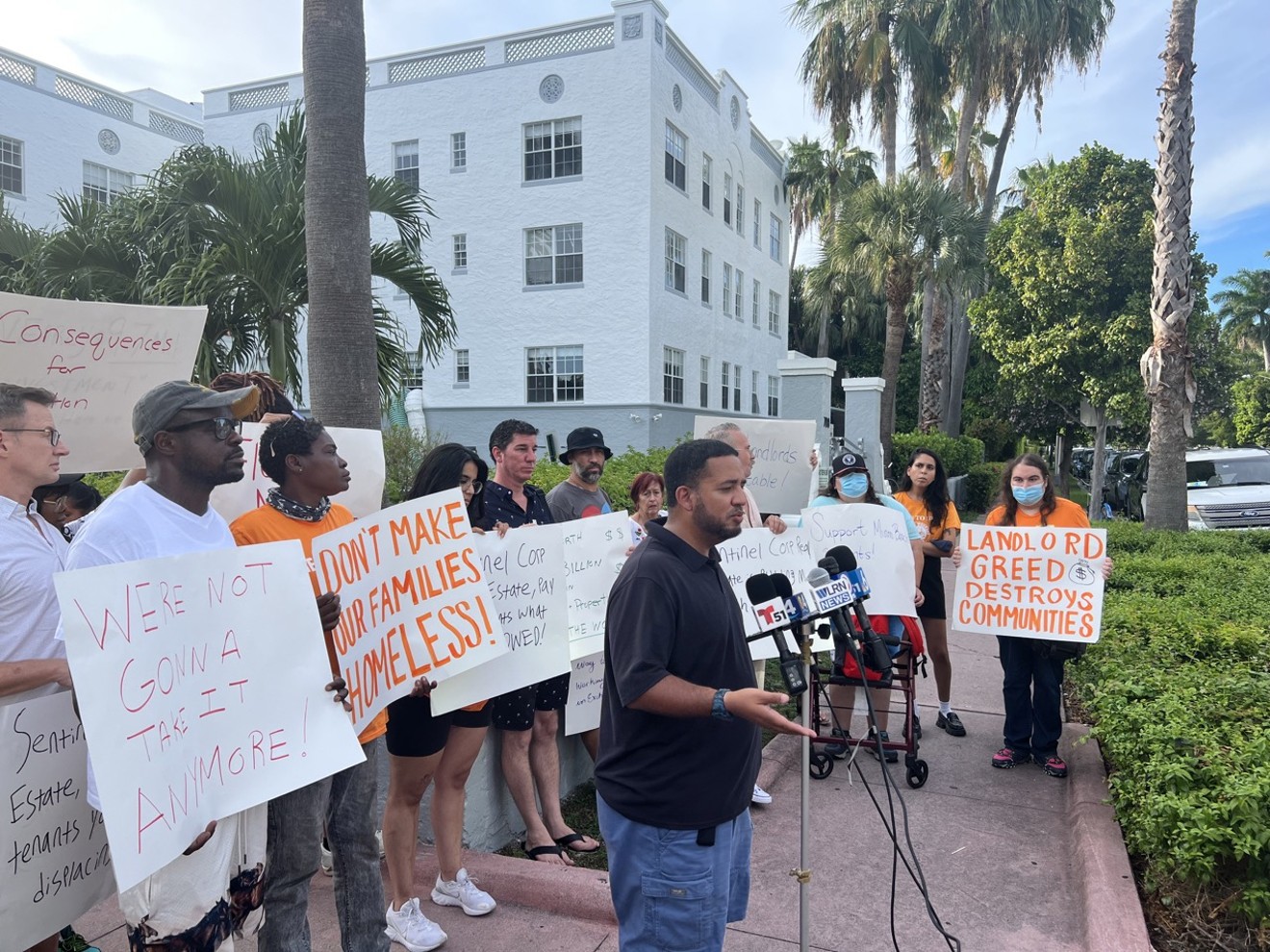 Jose Maldonado, a former tenant of 700 Euclid Ave., urges Miami Beach officials to take action against the landlord. Photo by Naomi Feinstein
Following a partial ceiling collapse and a water leak near the main electrical system at a Miami Beach apartment building, the city issued a June 14 notice deeming the structure to be unsafe. All of the building's tenants were ordered to evacuate.

Many former residents of the four-story, 54-unit Annell building at 700 Euclid Ave. are still living in hotels. The landlord, Sentinel Real Estate Corporation, terminated their leases days after the ceiling collapse, and they say they have yet to be compensated for their losses.

"We've been fighting on a daily, weekly basis to get any restitution or cover from Sentinel Group," former tenant Mark Williamson tells New Times. "Some of us have to find new apartments. Some people can't afford to buy new apartments so they're going to end up homeless. It's just a constant uphill battle."

The residents formed a tenants' association to advocate on behalf of the more-than-50 families displaced. The association, which is partnering with the Miami Workers Center, staged a rally in front of the dilapidated building on August 12 to hold its former landlord accountable.

"We've come to too many roadblocks," Williamson says. "We want to try and push the city to make sure all of these buildings that have been bought by these corporate companies are held up to code and they have no violations so other hardworking families and residents are not left in this situation again."

Under a county ordinance established after the 2021 Champlain Towers South collapse in Surfside, property owners are required to provide three months of relocation housing and associated costs in the event their building is classified as unsafe as a result of negligent maintenance. In the wake of the Annell building evacuation, Sentinel provided hotel accommodations and offered tenants units in its other buildings at current market rates through a lottery system.

"Living in a hotel is not a home," Maldonado says. "You're out of your routine and spending money out of pocket, no matter how much you're trying to save."

The tenants say they had to move all of their belongings out of their respective apartments by July 8 or risk having them thrown away and losing their security deposits. Because the city cut off the building's electricity, tenants had to move out in 95-degree heat without elevators or air conditioning.

"It was a frantic panic for people to move their furniture into storage," Maldonado says. "People lost days of work."

Williamson, who underwent spine surgery in February, had to use money he'd saved to cover medical bills to move into a new apartment downtown. He says he is now paying $900 more in monthly rent. Sentinel offered former residents $1,000 each for moving expenses but Williamson and others declined because the offer was conditioned upon them waiving legal claims against the company, he says.

Sentinel, a real estate firm based in New York, acquired the building for $11.9 million in April 2021 as part of a $96 million expansion in Miami. The building is one of 30 properties held by Sentinel's Helios Apartments Miami Beach.


According to the Miami History Blog, the property was built in 1935 and operated as the An-Nell Hotel for decades before it was converted into an apartment building in the late 1980s. It was one of many South Beach projects designed by architect Henry Hohauser and is part of the federally designated Miami Beach Architectural District, AKA the Art Deco District.

The former tenants say they had to deal with many issues in the building prior to the ceiling collapse, including persistent flooding, no working elevator for nearly a year, and unlocked front and back doors that resulted in squatters. The management, they contend, largely ignored their complaints about safety and security.

"Our units would flood," Troy Kurtz, a former ground-floor resident, tells New Times. "We'd be standing in water. The management wouldn't answer our phone calls. If they did, they wouldn't send anyone. We had the fire department here multiple times to help us get the water out. We had mold."

Williamson says he's concerned there was a profit incentive for Sentinel to let the building fall into disrepair. Now that the place is cleared out, the company can more easily renovate, and then sell or rent the units at higher prices, he notes.

"They didn't offer the position, 'You can come back in three months when we've got the work done,'" Williamson says. "Obviously, they want to start charging the new market value of rent. We're just trying to bring total awareness so other unsuspecting families don't get caught up in this."

Sentinel tallied 15 code violations from the city before the evacuation, according to municipal records. The violation notices included allegations of illegal dumping, working without proper permits, water-damaged ceilings and walls, broken stucco, a lack of proper lighting in hallways and stairways, and a deteriorated exterior.

During a string of eight structural inspections in 2021, the building was repeatedly listed as being "in violation," city records show.

According to the city's structural condition assessment conducted on July 16, 2021, one unit exhibited signs of moisture in its ceiling and on a window head. The ceiling in the building's mechanical area also showed water damage, and there were numerous cracks to the building's façade. The inspector noted that the elevator was out of order and that the lobby was sinking, with a slight gap between the floor and wall. None of these observations, however, warranted tenant evacuation, according to the report.

"Based on the site observations of the conditions of structural members of the building, licensed professionals should be hired to obtain permits and begin construction on the repairs which are needed," the report reads. "However, the building is safe for habitation and as is, presents no danger to the public and is not an imminent danger of collapse."

The building did undergo exterior renovations following the city's assessment, a board member from the neighboring Villas at South Beach tells New Times. The city's public records indicate a work permit was issued in March of this year for the exterior paint job.

Yet many of the interior problems persisted. When Williamson moved into the Annell in October 2021, there was still no functioning elevator.


This is at least the tenth building in South Florida to be classified as unsafe since the Surfside collapse, according to a CBS News report. Former residents of the Annell tell New Times they hope their experience convinces city officials to take action against neglectful property owners before it is too late.


"Billionaire landlords let these buildings fall into disrepair to the point where the city has to shut them down so that they don't collapse on top of people or bust into flames," Maldonado says. "It's completely unacceptable."
KEEP MIAMI NEW TIMES FREE... Since we started Miami New Times, it has been defined as the free, independent voice of Miami, and we'd like to keep it that way. With local media under siege, it's more important than ever for us to rally support behind funding our local journalism. You can help by participating in our "I Support" program, allowing us to keep offering readers access to our incisive coverage of local news, food and culture with no paywalls.
Make a one-time donation today for as little as $1.