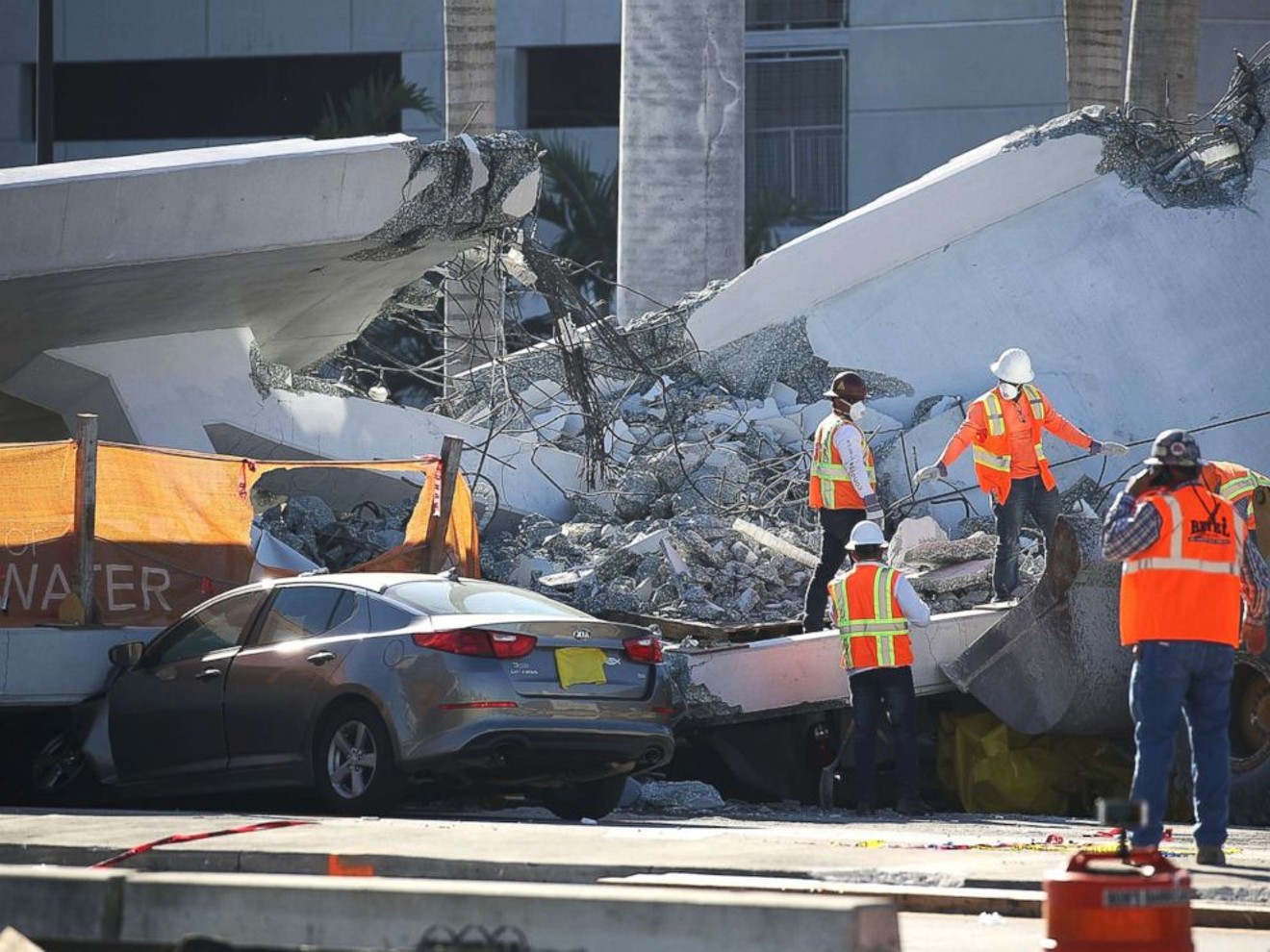 FIU's new pedestrian bridge came crashing down in March 2018. Photo courtesy of Andres Beregovich
In a turn of events that should surprise no one in Miami, the politically connected construction firm partially responsible for the 2018 fatal Florida International University bridge collapse received between $2 million and $5 million in federal small-business loans back in April.

According to databases from ProPublica and the Washington Post, MCM was approved on April 7 for a forgivable loan of up to $5 million, loaned through City National Bank of Florida.

MCM did not respond to a call and an email from New Times.

MCM has had offices in South Miami, Texas, and at one point, Panama. The company maintains building contracts in Miami and Texas, despite filing for bankruptcy in 2019. One of the largest contracts the company has in Miami-Dade County is the Miami International Airport expansion, which county commissioners voted without scrutiny to extend to MCM for another two years.

In order to qualify for federal small-business loans under the Coronavirus Aid, Relief, and Economic Security (CARES) Act, companies must have fewer than 500 employees. According to a disclosure filed in MCM's bankruptcy case, the company had 720 employees at its peak but was down to 280 employees by the time it filed for bankruptcy in June 2019.

MCM has come under fire for numerous problems over the past few years, including the FIU bridge collapse, which killed six people and injured eight on Tamiami Trail.

In 2019, the National Transportation Safety Board ruled that the collapse was the fault of all entities involved, including the Florida Department of Transportation, the last of which had failed to close the road despite obvious cracks in the bridge.

"Contributing to the severity of the collapse outcome was the failure of MCM; FIGG; Bolton, Perez and Associates Consulting Engineers; FIU; and the Florida Department of Transportation to cease bridge work when the structure cracking reached unacceptable levels," the board's report says.

MCM has been cited by the Occupational Safety and Health Administration for 13 safety violations since 2014 for projects in Miami, Fort Lauderdale, and Texas. The company also was criticized for "shoddy work" by a Transportation Security Administration employee after it allegedly placed a makeshift bridge at the Fort Lauderdale-Hollywood International Airport that collapsed under the worker's weight.

MCM, run by the prominent Munilla family, has been politically connected in South Florida for years, donating to various local officials. In 2017, Munilla executives donated about $25,000 to Miami-Dade County commissioners, as reported by the Miami Herald.

Miami-Dade Mayor Carlos A. Giménez's wife, Lourdes, is a cousin of the Munillas, and both of the mayor's sons have worked for MCM at various times. Giménez and his wife were seen with MCM partner Pedro Munilla on a trip to Chicago in 2019.

Over the years, MCM has had various government and military contracts with the Department of Defense, including a $66 million contract to build a school on the Guantanamo Bay Naval Base.

The PPP loan to MCM comes at a time when the program has been widely scrutinized for favoring large businesses that can weather a financial hit rather than small businesses struggling to make ends meet. The loans were supposed to benefit businesses severely affected by the coronavirus, but construction projects have been allowed to continue in Miami-Dade throughout the pandemic.
KEEP MIAMI NEW TIMES FREE... Since we started Miami New Times, it has been defined as the free, independent voice of Miami, and we'd like to keep it that way. With local media under siege, it's more important than ever for us to rally support behind funding our local journalism. You can help by participating in our "I Support" program, allowing us to keep offering readers access to our incisive coverage of local news, food and culture with no paywalls.
Make a one-time donation today for as little as $1.