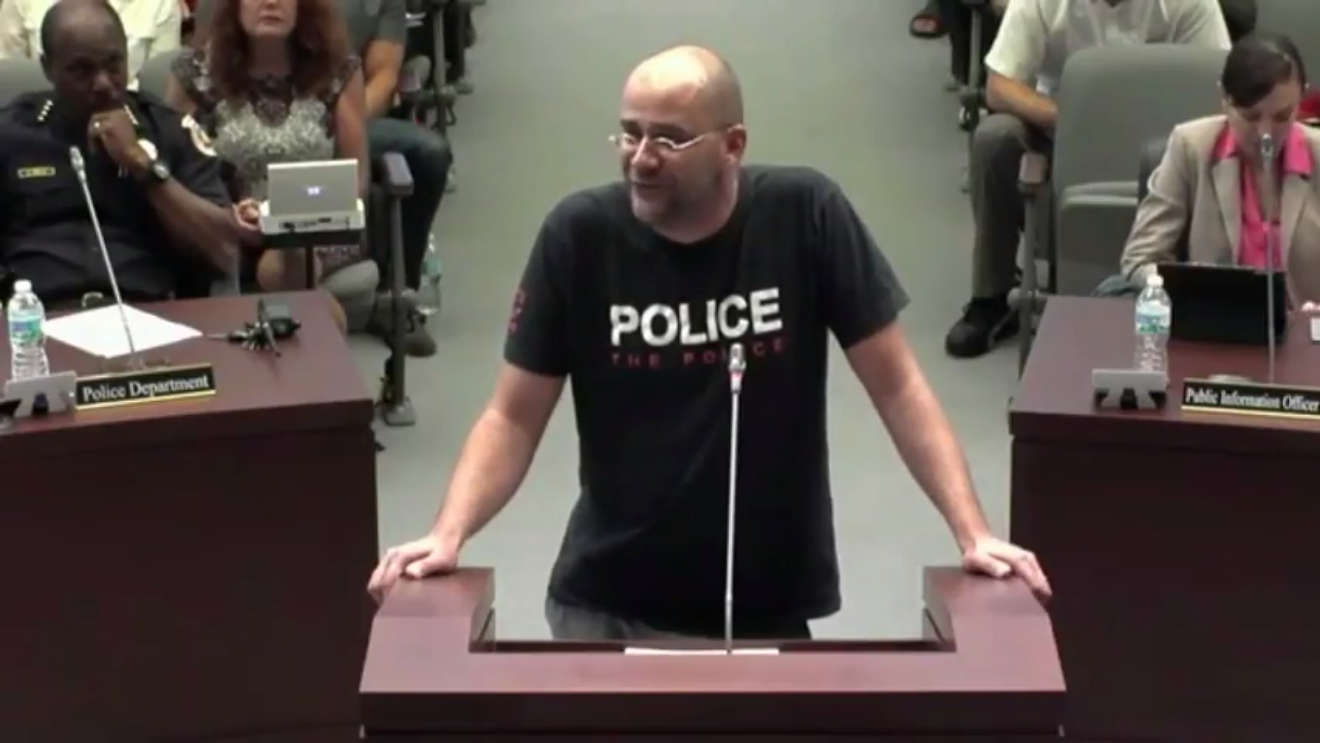 James Eric McDonough City of Homestead
In 2014, James Eric McDonough walked into Homestead Police Chief Al Rolle's office, placed his cell phone on the chief's desk, and began recording. Rolle later claimed McDonough never warned him he was capturing their conversation, which, if true, might have been a violation of Florida's "wiretapping" laws requiring that all parties consent to recorded. Rolle contacted Miami-Dade County State Attorney Katherine Fernandez Rundle, who sent McDonough a letter threatening to arrest him if he ever recorded the chief like that again.

But rather than back down, McDonough fought Rundle's threat in court — and won the right to record Rolle in a federal appeals court.

Now, that portion of McDonough's case is finished for good: Rundle appealed the decision to the U.S. Supreme Court, but yesterday, the highest court in America declined to hear her case.

McDonough's win expands the rights of everyday Floridians to record statements from public officials. Typically, Florida's two-party consent law applies only when people are being recorded "in private." That's why you can legally record someone walking down the street but not secretly tape a phone call. In the 11th Circuit Court ruling that McDonough won in 2017, the federal appeals court in Atlanta ruled that, because Rolle did not expressly tell McDonough that their office meeting was being held in private, Rolle had "no expectation" of privacy.

Therefore, the Atlanta appeals court ruled that Rundle's "threatened prosecution has no basis in the law." The U.S. Supreme Court yesterday let that ruling stand. Depending upon the way the ruling is interpreted in the future, the case might give Floridians added rights when it comes to recording conversations with public officials, including police chiefs or city employees, provided those employees are conducting official business and not speaking about private matters.

"The State Attorney, Katherine Fernandez-Rundle's, petition for certiorari to the US Supreme Court just went down in flames," McDonough wrote on his Facebook page, titled "True Homestead," yesterday. "MCDONOUGH v. RUNDLE is now the law of the land!"

"We are pleased that the Supreme Court denied certiorari review in this case,” Ali told local blogger and activist Grant Stern yesterday.

Its a good day when @KathyFndzRundle loses her ability to wrongfully threaten arrest for an activist who recorded the police. https://t.co/0o3SueBw0y

In 2005, Rundle sent a similar legal threat to former New Times, then-Miami Herald columnist Jim DeFede. In reaction to a large public bribery scandal and subsequent New Times report prying into his personal relationships, then-Miami-Dade Commissioner Arthur Teele called DeFede and ranted to him on the phone. Teele fatally shot himself in the Herald lobby soon after. DeFede had recorded the phone call without Teele's consent, and Rundle then threatened to arrest him. Under the new ruling, it's debatable whether DeFede broke the law.

McDonough's case began in when McDonough says he complained after her witnessed Homestead Police Officer Alejandro Murguido driving recklessly through a residential neighborhood. Instead of taking the criticism in stride and driving safely, Murguido arrested McDonough for no reason.

That arrest sparked a fight that remains ongoing six years later. McDonough was repeatedly dragged out of Homestead City Hall for complaining about the chief, claims Rolle withheld or destroyed public records to protect his officers, and has sued more than 30 cops for what he says is a coordinated harassment campaign against him.
KEEP MIAMI NEW TIMES FREE... Since we started Miami New Times, it has been defined as the free, independent voice of Miami, and we'd like to keep it that way. With local media under siege, it's more important than ever for us to rally support behind funding our local journalism. You can help by participating in our "I Support" program, allowing us to keep offering readers access to our incisive coverage of local news, food and culture with no paywalls.
Make a one-time donation today for as little as $1.