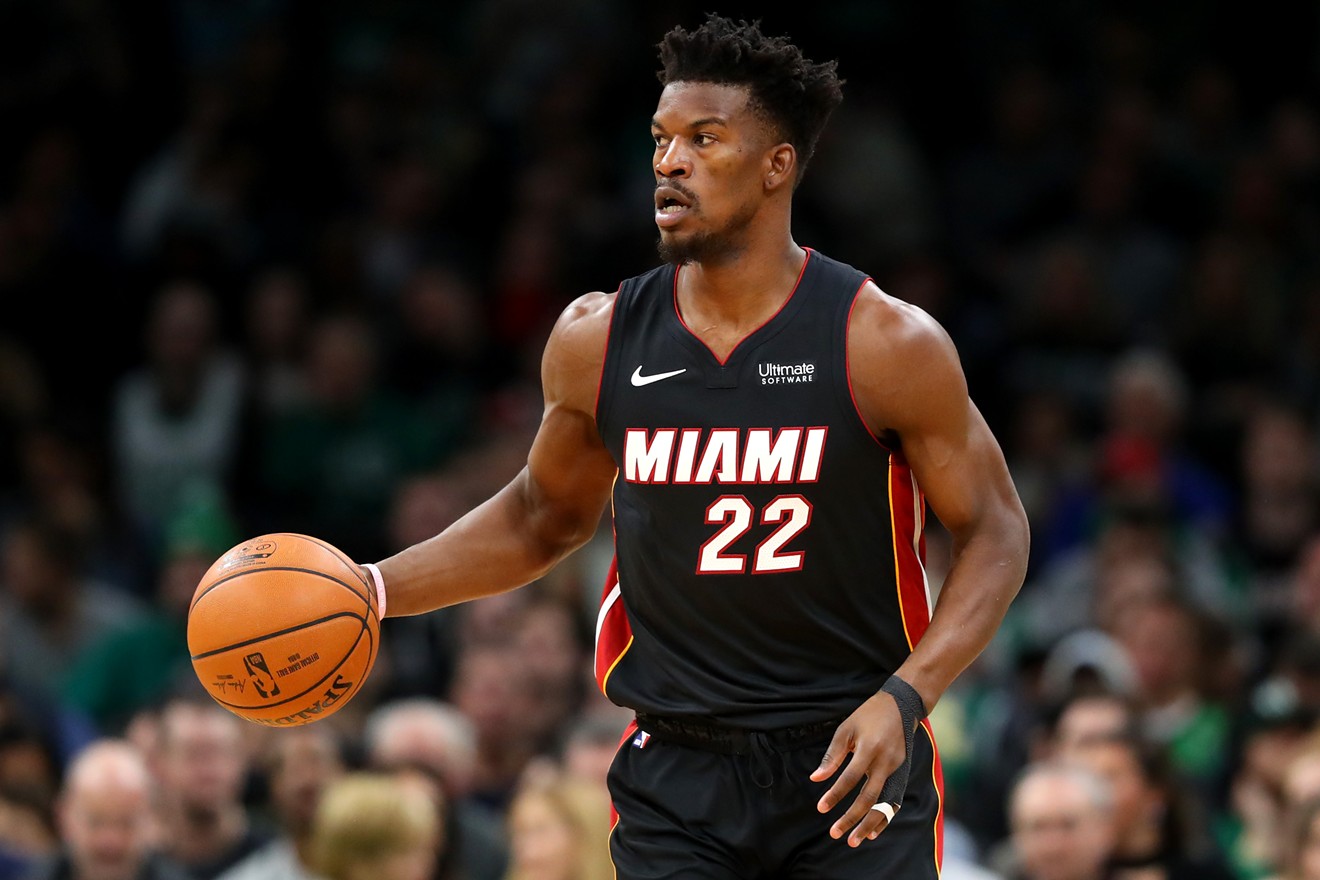 Jimmy Butler was born to play for the Miami Heat. Photo by Maddie Meyer/Getty
In a normal world, Jimmy Butler would be reporting to training camp to begin his second season with the Miami Heat right about now. Heat fans would be focused on an under-the-radar player in the developmental G-League. And, almost assuredly, the Heat wouldn't be coming off a championship run.

We did it! We just found the one reason we're thankful that 2020 can be described as anything but a normal world.

When Butler and the Miami Heat face the Boston Celtics in Game 4 of the Eastern Conference Finals tonight, an appearance in NBA Finals is on the line. Minus the real-world issues surrounding the encapsulated game, Butler's first season in Miami has gone about as well as one could have expected.

Why have Jimmy Butler and the Miami Heat hit it off better than Barbie and Ken did when they first met in Toy Story 3? Because like Barbie and Ken, Butler and the Heat were meant to be together.
Jimmy Butler takes practice personally. Like the Miami Heat, Jimmy Butler takes practice extremely seriously — so much so that it offends people. Butler infamously was involved in a practice with the Minnesota Timberwolves that featured him whopping his teammates' asses and mocking them for being soft. They couldn't take it, and he was gone soon after.

The Miami Heat is also known for practices that make the games seem easy by comparison. It's no wonder Heat players look so prepared on the court this season. They're practicing their asses off.
Jimmy Butler isn't for everyone. The Jimmy Butler era in Philadelphia didn't go well because Jimmy Butler wasn't for the 76ers. They couldn't handle his edge or what he demanded from coaches and teammates. It's been reported recently that ex-coach Brett Brown wanted no part in coaching Butler.

In Miami, it's the complete opposite. Miami wishes they had 12 of Butler. Coach Erik Spoelstra gushes over him.

The Miami Heat and its culture aren't for everyone. Not every player wants to be driven to be his best. Jimmy Butler has a similar personality, one that would be oil mixing with water on some teams. Not in Miami.
Like the Miami Heat, Jimmy wants that smoke. Throughout the history of the franchise, the Miami Heat has garnered a reputation as a team that backs down from no fight. There will be no pushing the Miami Heat around, and if it's attempted, there will be instant pushback.

It took Jimmy Butler just a few games to prove he's the exact-same way. TJ Warren of the Indiana Pacers learned the hard way that, like Udonis Haslem and Alonzo Mourning before him, Jimmy is not the one you want to mess with.
Jimmy Butler treats his teammates like family. Jimmy Butler has been open about his mom kicking him out of the house when he was 13, leaving him to couch-surf until his senior year in high school. He finally found a family that took him in and ever since has referred to them as anyone else would their biological family.

It's obvious that Butler values people who treat him like family and will repay the affection tenfold if you prove yourself to be someone who treats him well. The Miami Heat is the same way with its players. You can already tell Butler and Miami fit so well together it seems as if the Heat drafted him and he's been in Miami ten years.
Jimmy Butler is a '90s throwback player to Pat Riley. It's been said that no player has ever made Heat president Pat Riley swoon quicker than Jimmy Butler has in his first year with the team. Butler is a throwback to '90s basketball, when players were physical, demanded more from teammates, and hated their opponents.

In Miami, Jimmy Butler has his biggest fan: Pat Riley. It's as if Butler was made in a science lab to the specifications Riley requested of a franchise player.
Off the court, Jimmy Butler isn't your typical NBA player. Not everyone knows this, but Jimmy Butler has an extremely entertaining YouTube channel. The camera follows Butler as he travels around the globe, sipping on wine, smoking cigars, and trying new things.

If there's one city in the United States that most belongs on the Travel Channel, it's Miami. Butler, as shown in the video above, seemed at home here before he even arrived.
Jimmy Butler is a coach on the floor. The Miami Heat already have a Hall of Fame coach in Pat Riley and a future Hall of Fame coach in Erik Spoelstra, but it's always been a team that prided itself on having a player on the floor who is an extension of the coaches. Jimmy Butler is that guy.

The season after Dwyane Wade left, Butler showed up. The timing has been impeccable, and the results aren't a fluke. Butler has brought more than his physical skills to the Heat. He's brought his coach's mindset.

With the Heat, you never know. Butler might actually be behind the bench one day.
The Miami Heat badly needed a whale. Butler arrived in Miami at the perfect time. With Dwyane Wade retiring, the Heat was in desperate need of direction. The roster was a mix of bloated veteran contracts and promising rookies, something that usually doesn't amount to much in the NBA.

Butler changed all that, and fast. His arrival reset Miami following Wade's departure and made the team a championship contender once again. The contracts are gone, but the promising young players have remained. Butler needed Miami, but Miami needed Jimmy more.
Dwyane Wade passed the torch to Jimmy Butler. As mentioned above, Miami needed a replacement franchise player after Wade left. Wade and Butler are good friends off the court, so much so that when Wade left Miami for Chicago a few seasons ago, it was only because Butler was playing for the Bulls.

For years, Wade whispered in Butler's ear that Miami was the place to go if he was able to get there in free agency. We're all seeing why Wade made that recommendation. It's been a perfect fit.
Heat culture. The easiest explanation for why Jimmy Butler was born to be a member of the Miami Heat is that everything that encompasses Miami Heat culture can be said about him as well. He's a hard worker who believes in doing all the small things that add up to something larger, and he's not afraid to push others to be their best, even if it pisses them off.

Jimmy Butler was born to carry on the Miami Heat culture torch for the next handful of years. The only regret is that he didn't get to be a part of the Heat sooner.
KEEP MIAMI NEW TIMES FREE... Since we started Miami New Times, it has been defined as the free, independent voice of Miami, and we'd like to keep it that way. With local media under siege, it's more important than ever for us to rally support behind funding our local journalism. You can help by participating in our "I Support" program, allowing us to keep offering readers access to our incisive coverage of local news, food and culture with no paywalls.
Make a one-time donation today for as little as $1.