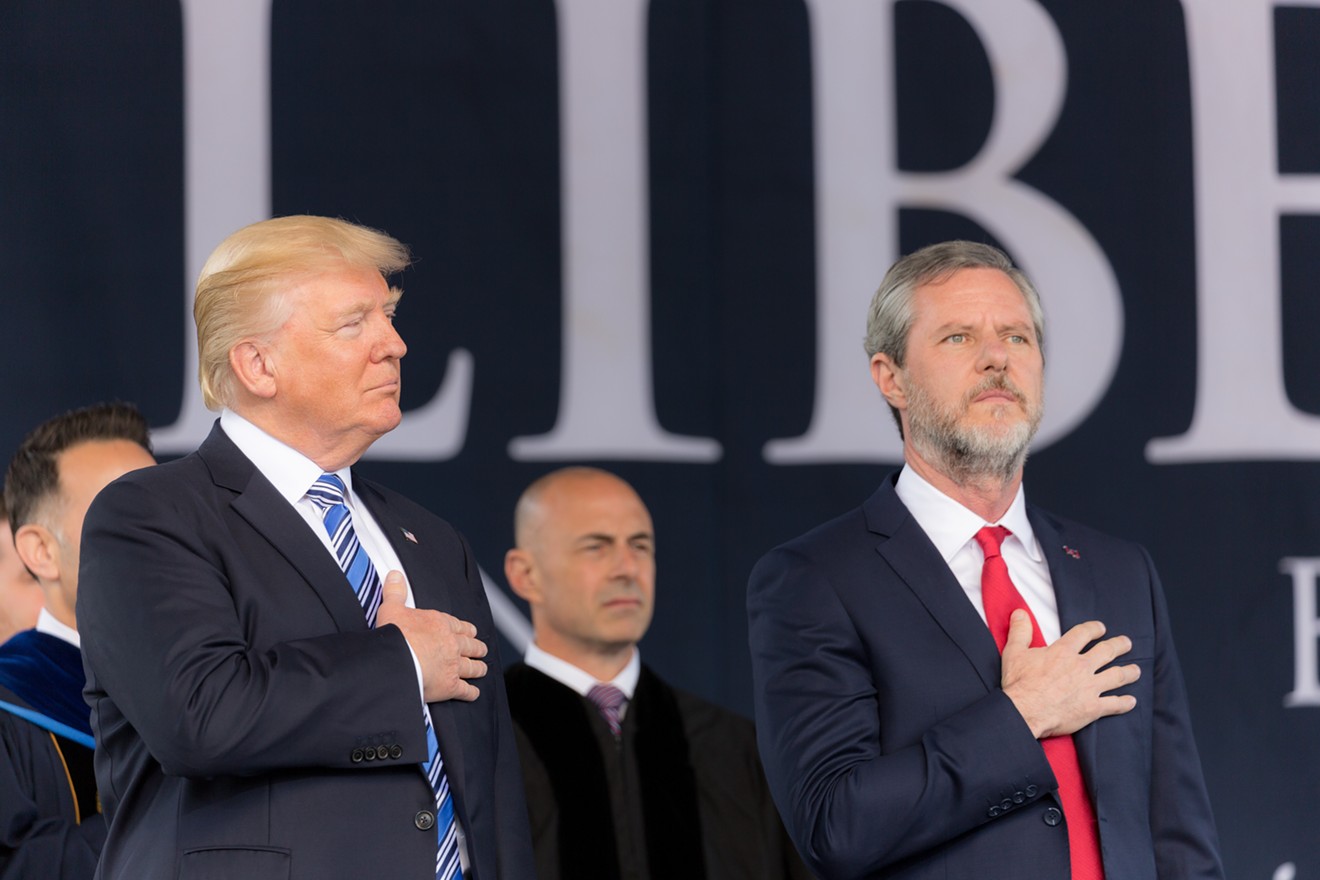 Shealah Craighead / Wikimedia Commons
Update 5/8/19: Reuters reports that someone in Florida obtained "personal" photos of Falwell Jr. and tried to blackmail him. Through a lawyer, Granda denied that he was involved.

Jerry Falwell Jr., the evangelist son of world-famous Southern Baptist minister Jerry Falwell Sr., runs a hardcore-Christian university and often acts as the public face for the American evangelical movement. That's why it seemed so hypocritical when he endorsed Donald Trump — a sexually rapacious avatar of American greed, racism, and unearned privilege who very clearly does not care about the Bible that Falwell Jr. claims to love so much.

But it's also pretty darn curious that Falwell Jr. recently admitted in court that he paid $1.8 million to a pool attendant at Miami Beach's Fontainebleau resort who had befriended the Falwell family. It was part of an exceedingly odd business deal in which the group tried to buy the Miami Hostel at 810 Alton Rd. in South Beach. The building is attached to the popular Italian restaurant Macchialina and also houses the 120-bed hostel, where a bed costs just $20 per night.

The case raises more questions than answers: Falwell Jr. and his wife appear to have simply "befriended" a then-21-year-old pool attendant while the husband and wife were staying at the ritzy Fontainebleau. They then welcomed the pool attendant into their lives, began flying him around on a private jet, and even put up millions of dollars to help his business ventures. Falwell and his wife have appeared in Facebook photos eating at Macchialina with the pool attendant — a Florida International University graduate named Giancarlo Granda, who now lives in Washington, D.C., and attends Georgetown University.

According to public court filings (first noted by BuzzFeed), Falwell Jr. said in court this past December 4 that he made two loans to a shell company called Alton Hostel LLC, which was controlled by Falwell's wife and son, plus Granda.


Falwell made the statement as part of a still-open lawsuit in Miami-Dade Circuit Court. In August 2017, a father and son — Jesus Fernandez Sr. and Jr. — sued Granda and the Falwell family. The two men claim that they were promised a cut of the real-estate deal but that the Falwells never paid up. (The Falwells deny this.) According to the original lawsuit, Granda was working as a pool attendant at the Fontainebleau in 2012 when Falwell Jr. and his wife Becki stayed at the resort. The suit says Granda "befriended" Falwell Jr. and his wife at the Fontainebleau. The suit does not elaborate as to why the relationship began, but it does allege that Falwell “indicated that he wanted to help Granda establish a new career and build a business" and that Falwell Jr. "told Granda to search for a profitable business idea and promised that he would purchase, finance, and/or establish this business for Granda." The suit alleges that Granda suggested an "internet business" before proposing the hostel idea. The suit alleges that Granda then asked Fernandez Sr. and Jr. for investment advice.

According to Miami-Dade County property records, the Falwells eventually bought the Alton property in February 2013 for $4.65 million. At the time, Falwell's then-23-year-old son, Jerry "Trey" Falwell III, was listed as the LLC's sole owner — but Granda was later added to the LLC's documents. Granda lists himself as the current "owner" of Miami Hostel and a "managing member" of the LLC.

Giancarlo Granda via LinkedIn
In August 2017, a reporter for Politico spent a weekend at the Miami Hostel — Politico unsubtly labeled the place a "flophouse" and noted the Falwell-tied property encourages behaviors (drinking, premarital sex, smoking, coed sleeping) that would get students expelled from Liberty University, the uptight Christian college that Falwell Sr. founded. Politico also noted that Alton Hostel LLC was, for a few years, based at a Virginia property owned by the nonprofit university. Politico also called the hostel "gay-friendly," which is interesting, considering that Falwell Sr. famously blamed the 9/11 attack on gay people and that Falwell Jr. runs a university that is explicitly anti-LGBTQ.

But the story keeps getting weirder: BuzzFeed has reported that Falwell Jr. is (or at least was) a pal of Michael Cohen's and that Cohen helped persuade Falwell to endorse Trump's 2016 presidential run. Somehow Granda, too, got tied up in this: BuzzFeed says it has obtained a photograph of Granda meeting Trump at the university in Lynchburg, Virginia. (The university owns the copyright to the photo and did not give BuzzFeed permission to publish the image.) A source also told BuzzFeed that Cohen and Falwell discussed the Miami-Dade County lawsuit before Falwell endorsed Trump. But there is currently no direct evidence that the real-estate deal with Granda influenced Falwell's Trump endorsement. New Times was not able to independently corroborate BuzzFeed's reporting.

The case is yet another weird link between Miami and the people orbiting Trump-world: New Times has previously reported, for example, that a Russian billionaire central to the Mueller investigation, Aras Agalarov, owns $14 million in Miami real estate and once threw a party at the Versace Mansion headlined by '90s one-hit wonder Lou Bega.

As for the Falwell case, a judge has already dismissed some of the fraud claims. Falwell Jr. filed the December 4 affidavit in an attempt to dismiss the suit's other claims: In the new filing, Falwell Jr. said that he met with Granda, Fernandez Sr., and Fernandez Jr. for breakfast at an unnamed Miami "Cuban restaurant" but that he never promised the Fernandez family money or a role in the transaction.


"From time to time, the managers of Alton Hostel, my son, Trey Falwell, and Giancarlo contact me for advice based on my 20 years of real property legal practice and experience investing in and developing real-estate," Falwell Jr. wrote. "I am not paid for that advice."

But he added later: "My wife and I have made loans to Alton Hostel."
KEEP MIAMI NEW TIMES FREE... Since we started Miami New Times, it has been defined as the free, independent voice of Miami, and we'd like to keep it that way. With local media under siege, it's more important than ever for us to rally support behind funding our local journalism. You can help by participating in our "I Support" program, allowing us to keep offering readers access to our incisive coverage of local news, food and culture with no paywalls.
Make a one-time donation today for as little as $1.