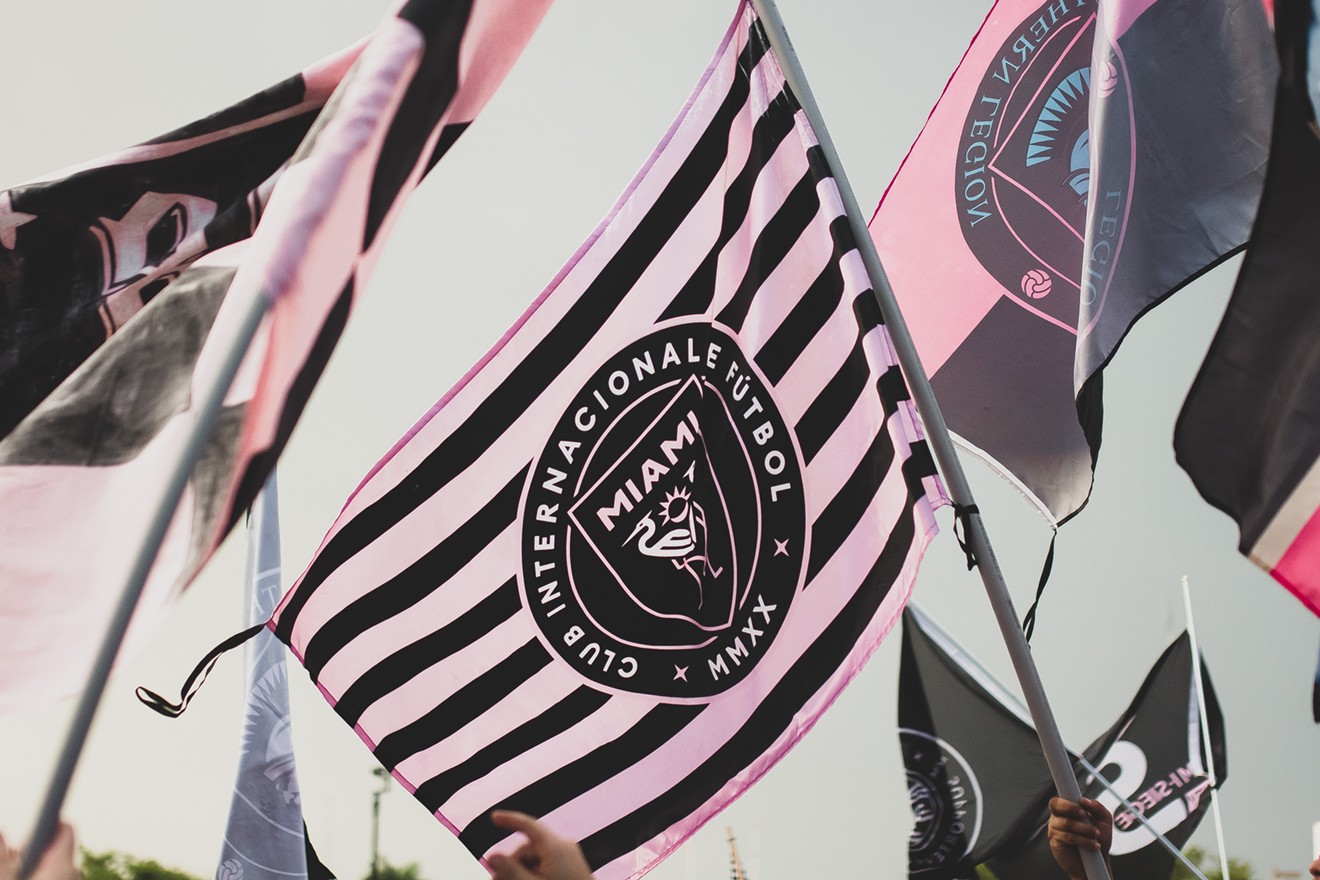 Well, well, well, everyone is a soccer fan now, huh? Photo courtesy of Inter Miami CF
Inter Miami CF is two games into its inaugural season, yet it still doesn't feel real. After years of waiting, Inter finally has some actual fútbol under its belt, giving Miami soccer fans a taste of what's to come.

Those first two games — both losses — have also provided a glimpse at the Inter Miami fan base heading into the team's first "home" game (see: 30 minutes north of Miami) this Saturday against the LA Galaxy. A few distinct fan types are emerging as they root on the new kid on South Florida's sports block.

Here are the five types of Inter Miami fans we've noticed.
The Proper Fútbol Snob. Well, well, well, everyone is a soccer fan now, huh? The Proper Fútbol Snob is the person you see tweeting about soccer games every Saturday morning, confusing the rest of us who haven't even had our coffee yet. They refer to a nice pass as a "useful ball" and call uniforms "kits" and the field a "pitch." No doubt they are doing it right — they just want to make sure you know that.

Now the rest of us have shown up for soccer, and they're judging us. They're used to dealing with bandwagon soccer fans every four years during the World Cup, but now that we're all trying to get up to speed with the game, they're going to make us earn it. Stay out of their way. Respect their beautiful game.
The Inter-grammer. It seems excitement around Inter Miami was boosted 50 percent because it nailed the logo, colors, and overall look. Legitimately, Inter Miami could exist as only a fashion brand. Throw in the fact that it's called a "club" and that David Beckham, one of the sexiest men on Earth, is an owner. How Miami. How very Instagram-worthy.

Pink, white, and black with two great white herons locking legs and "Miami" written in a beautiful font we didn't know existed? Take my money. The logo and look are the main attractions for many fans. The soccer is just a bonus.
The Day Drinker. In the end, sports are just entertainment. They're also a fantastic reason to drink alcohol. One of the best, in fact. Ask Miami Dolphins fans who wake up at 8 a.m. to park in a gravel lot and stand around waiting for the team to get its ass kicked starting at 1. If that isn't the clearest example of why some Inter Miami fans might just be in it for the midafternoon Saturday socializing, we don't know what is.

Inter Miami is a new thing. It's exciting to think about witnessing these first few games. It's even better if you're doing shots of Jack in a crowded bar midday.
The Escapist. Look around: South Florida's sports landscape hasn't been all that great lately. There's some hope the Marlins won't lose 100 games this season or that the Miami Heat might make a playoff run, but it's been years since a local team has given fans any reason to celebrate.

Some fans just want a clean slate, and Inter Miami provides that. It's a new, untainted outlet for all the cheering that fans haven't been able to release often enough. Florida Panthers fans are sad, man! Inter Miami hasn't hurt anyone yet. The team made us wait but has inflicted no pain thus far. It's the fresh relationship we're all ready for.
The Historian. The greatest thing about Inter Miami is we're witnessing the beginning of a sports franchise, and that doesn't happen very often. MLS is an up-and-coming sports league that's cemented itself as a stable fixture in American sports. This is a rare opportunity to see a Miami team make its debut.

We all remember the early years of the Marlins, Panthers, and Heat. Some fans even have memories of the Dolphins' mid-'60s debut. South Florida is one of only 13 cities in the nation to have a representative in all four major sports. Now, we have a bonus: an MLS team.

Some of us are just here to mark history, check out what's new, and hopefully be part of something special. That something could be a championship one day — and we'll all look back and reminisce about these initial days of Inter Miami.
KEEP MIAMI NEW TIMES FREE... Since we started Miami New Times, it has been defined as the free, independent voice of Miami, and we'd like to keep it that way. With local media under siege, it's more important than ever for us to rally support behind funding our local journalism. You can help by participating in our "I Support" program, allowing us to keep offering readers access to our incisive coverage of local news, food and culture with no paywalls.
Make a one-time donation today for as little as $1.