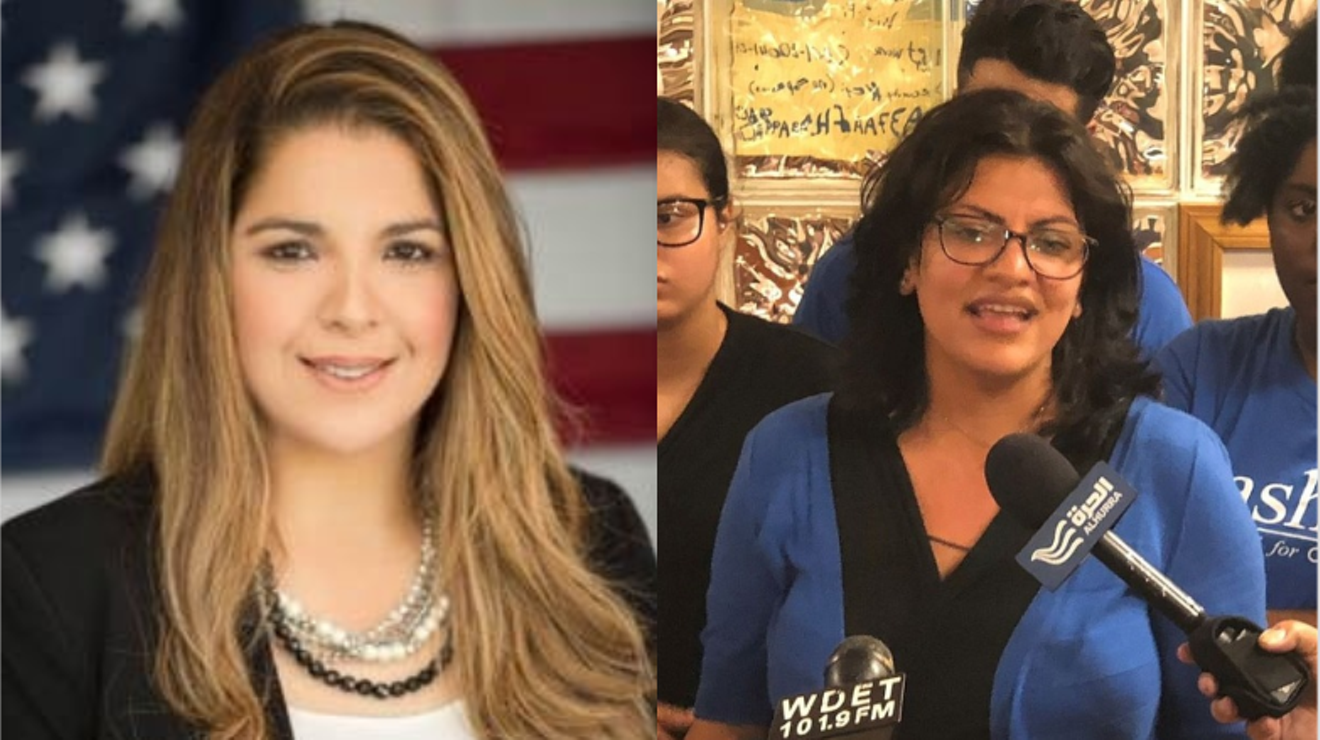 Hallandale Beach Commissioner Anabelle Lima-Taub (left) and U.S. Congresswoman Rashida Tlaib City of Hallandale Beach / Voice of America via Wikimedia Commons
Earlier this week, Hallandale Beach Commissioner Anabelle Lima-Taub decided, for some godforsaken reason, to post on Facebook that she was worried that Rashida Tlaib, one of the first two Muslim women elected to Congress, was a "Hamas-loving anti-Semite" who would "blow up Capitol Hill." In other words: With zero evidence, she accused a Palestinian-American of being a terrorist. That's racist, full stop.

In the face of international scorn, Lima-Taub yesterday once again took to Facebook. However, she did not apologize for a painfully obvious act of racism. Instead, she doubled down by saying she was "unapologetic" and then compared Tlaib's ideas to those of Hitler's.

"I am offended by anyone who is NOT OFFENDED by Rashida Talib’s [sic] hateful rhetoric and pro BDS and other radical dangerous views calling for the obliteration of Israel, literally off the face of the map (as demonstrated here - this is a map hanging in her congressional office relabeling Israel as Palestine)," Lima-Taub wrote. "Hitler had a one-state solution when he began laying the foundation for a Nazi state back in 1933. I find Talib’s [sic] one-state solution (not including Israel) to be dangerous, radical and one that should be of concern to anyone not filled with hate in their heart."

Those ideas are insane: Lima-Taub, a Jewish woman who was born in Israel; and Tlaib, an American woman of Palestinian descent, obviously disagree about Israel's policies and that country's right to exist. But it's absolute nonsense to imply that Tlaib supports violence or terrorism. Lima-Taub misleadingly conflates criticism of the Israeli state with criticism of Jewish people; though Tlaib obviously has issues with the state of Israel, there is zero merit to claims she's acting out of hatred for Jews. Tlaib was born to two Palestinian immigrants: In 2008, she told the Detroit Free Press that her grandfather was shot by Israeli soldiers during the 1967 Arab-Israeli War.
Even Hallandale Beach Commissioner Michelle Lazarow, who is herself Jewish, called Lima-Taub's statements "bigotry" and suggested the city commission somehow sanction Lima-Taub.

But even that threat didn't stop her from making a fool of herself this week. Her post yesterday continued:

After watching disturbing videos of Rashida Talib’s [sic] anti-Semitic rhetoric aligned with some of the most radical narrative in the Middle East, and seeing her unapologetic arrogance in calling the POTUS a motherfucker (whether you hate his policies or not- any elected official should afford the President some basic respect). While several of my colleagues past or present are or were corrupt, unethical, and then some — I have never spoken at a public meeting and used unprofessional or inappropriate language to describe them no matter how deeply rooted my disdain for them may be). Google Rashida Talib [sic] and her affiliations and anti-Israel rhetoric. This country affords her the right to freedom-of-speech, and I remain unapologetic for my views that she is a danger to the peace process and demand an apology of her for relabeling Israel as Palestine on a map hanging on her wall in her congressional office.


Lima-Taub has a habit of making outlandish comments: She refers to herself as the "Rogue Commissioner" on Facebook and once also compared a fellow lawmaker, Keith London, to Hitler. However, London has also made offensive comments toward her during public meetings, and Lima-Taub alleged to the Miami Herald that London inappropriately touched her.

The Sun Sentinel yesterday first reported that Lima-Taub had accused Tlaib of being a terrorist. (WPLG also reported on Lima-Taub's second Facebook post earlier today.) In follow-up interviews, Lima-Taub accused the Council on American-Islamic Relations, one of the nation's most prominent Muslim civil rights groups, of also being tied to terror groups. (This is a common canard among Islamophobes that has never been substantiated.) In response yesterday, CAIR Florida spokesperson Wilfredo Ruiz urged Lima-Taub to resign.

But, of course, today Lima-Taub decided to double down.
KEEP MIAMI NEW TIMES FREE... Since we started Miami New Times, it has been defined as the free, independent voice of Miami, and we'd like to keep it that way. With local media under siege, it's more important than ever for us to rally support behind funding our local journalism. You can help by participating in our "I Support" program, allowing us to keep offering readers access to our incisive coverage of local news, food and culture with no paywalls.
Make a one-time donation today for as little as $1.