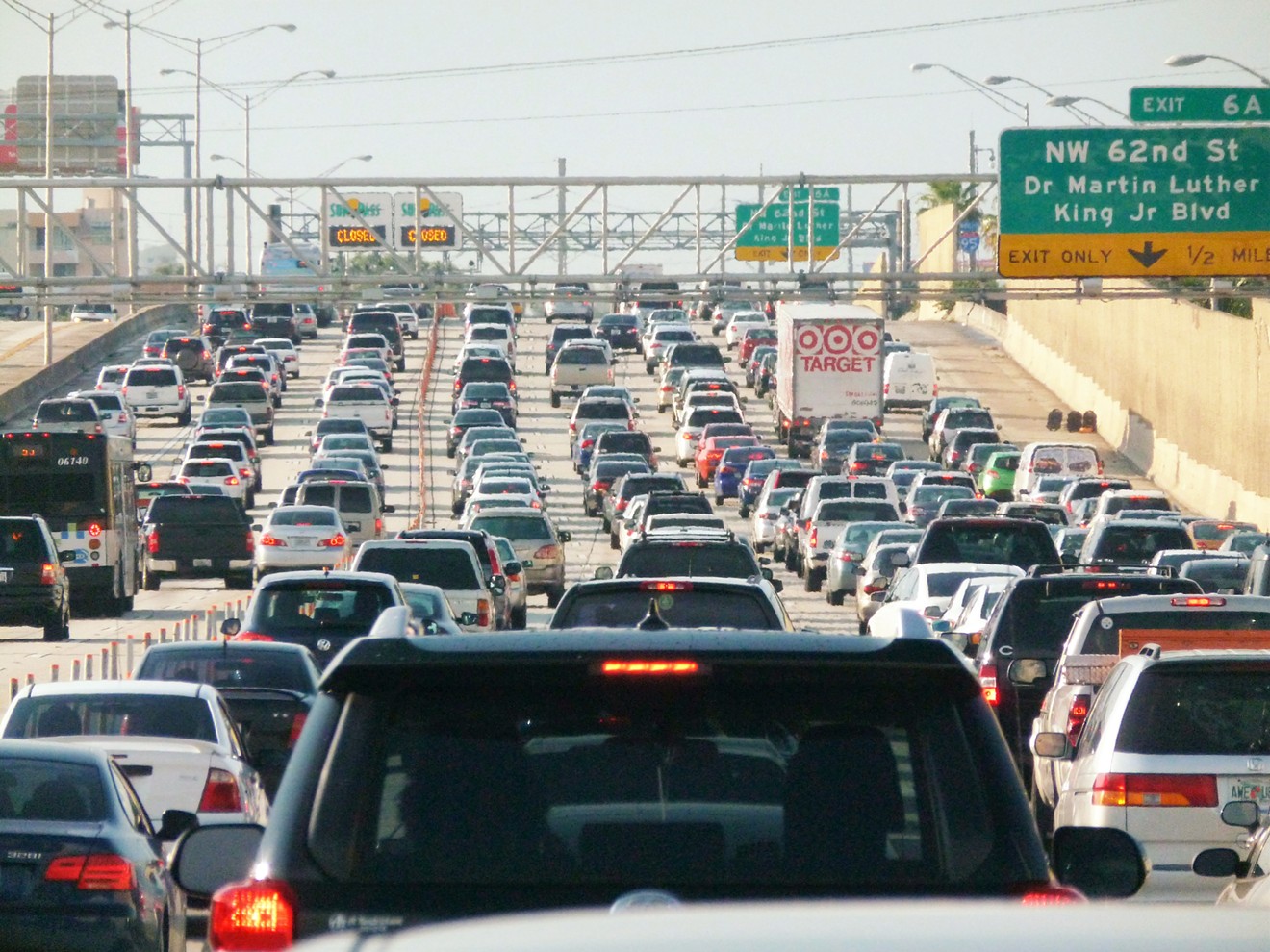 Traffic in the before times. Photo by B137 / Wikimedia Commons
It seems no matter how much people think they can fix it, traffic in South Florida is always going to suck.

Even after that brief, blissful period at the beginning of the pandemic when no one was driving and you could actually arrive places in time, gridlock is back to how it always was.

I-95 is regularly clogged, drivers are stuck at traffic lights for longer than it takes to walk to their destination, and you're better off swimming to Miami Beach than trying to cross the MacArthur Causeway.

Part of the reason driving is so bad in Miami is the lack of a comprehensive public transit system. Cooler heads, like the nonprofit organization Transit Alliance, have recently tried pushing for improved bus frequency and dedicated bus lanes to alleviate traffic, but people in power have a tendency to prefer big, flashy projects over sticking to the basics.

Just this week, tech entrepreneur Elon Musk proposed drilling giant tunnels under Miami's roads to create...more roads. While some folks on social media were reasonably asking things like, "How are you going to dig tunnels under a city that's six feet above sea level?" and "Why would you spend money on this rather than just improving the bus system?" leaders like City of Miami Mayor Francis Suarez and Miami-Dade County Mayor Daniella Levine Cava seemed to take the bait.

Musk's Mole Man dream isn't even the craziest idea to fix traffic to come down the pike over the years. So while you're sitting at that red light for the next half-hour, here's a list of four wacky plans South Floridians have come up with to alleviate gridlock. 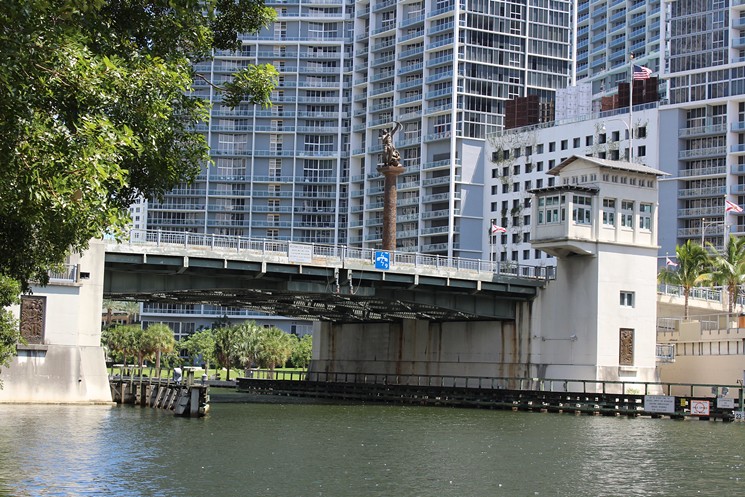 The drawbridge, which connects the rest of downtown Miami to Brickell, is raised several times a day so boats can pass underneath, leaving drivers and pedestrians on both sides of the structure stranded for what feels like an eternity. In 2016, New Times named the bridge one of South Florida's ten worst intersections.

Taking a cue from one of his predecessors, former mayor Maurice Ferré, Suarez tried to push for an underwater tunnel to be built so Brickell commuters wouldn't have to worry about pesky boats. But, as an engineer recently pointed out to New Times, tunneling through Miami's foundation of porous limestone, although possible, would be prohibitively expensive and pretty darn difficult, so the project was eventually canned. Instead, the Florida Department of Transportation is rehabilitating the bridge to make it open and close faster. Work on that project is expected to finish this year. 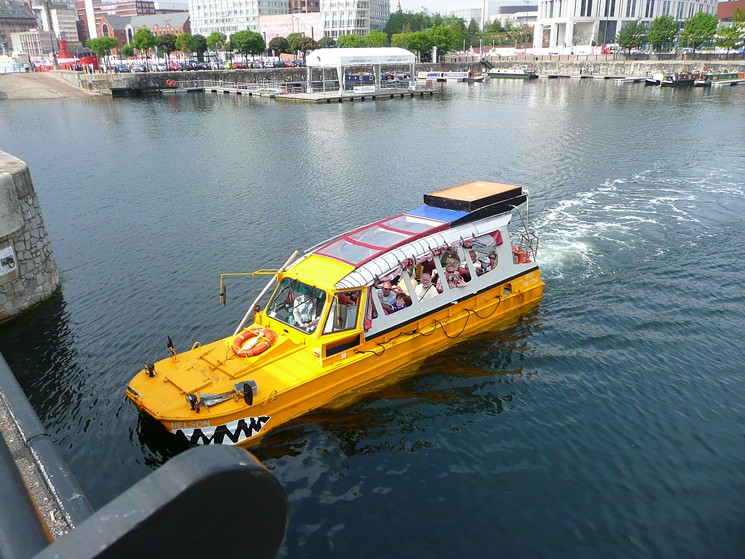 Yes, those duck boats.
Photo by citytransportinfo/Flickr
A duck-boat captain prescribed amphibious public transportation. In a departure from Musk and Suarez's ideas of underground travel, one Miami business owner proposed a different field ripe for public transit: on the water.

In 2016, Capt. Andy Langesfeld of the now-closed Miami Pirate Duck Tours lobbied Miami city commissioners to set up an "amphibious public transportation system" of duck boats that could drive on land and then plop into the water at the first sign of traffic.

Langesfeld envisioned public buses carting people across the Miami River and crisscrossing Miami's waterways, getting travelers to their destinations without ever hitting a stoplight.

The duck-bus plan wound up treading water and never took off. But if it had, Miami could've been a kind of Venice of the 21st Century, with wisecracking tour guides instead of singing gondoliers. 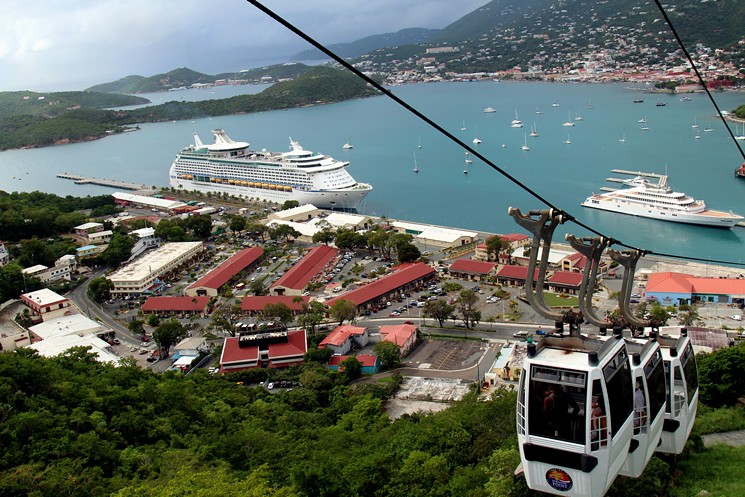 This could be us, but it's too hot.
Photo by Thank You/Flickr
County leaders wanted to install aerial gondolas. You know those sky gondolas they have at ski resorts or the ones at the Youth Fair that take you from one end of the fairground to the other for easy corndog consumption? At one point, Miami-Dade County officials considered placing those gondolas above roadways to connect certain hotspots via levitation.

But there's a reason gondolas work well in cold places like snowy mountains but not so much down south: the heat. A feasibility plan from 2016 found that in several cases, leaving pedestrians suspended in the air for too long in the blistering Miami sun posed too much of a risk without proper climate control. Consulting engineers determined that a short gondola trip from Marlins Stadium to downtown would be the most reasonable and wouldn't pose much of a health risk, but the aerial cable system never got off the ground (so to speak).

Former county commissioner Dennis Moss floated a similar gondolic idea in February of 2020, but that was just before the pandemic threw everything into turmoil, and Moss was eventually termed out of office. 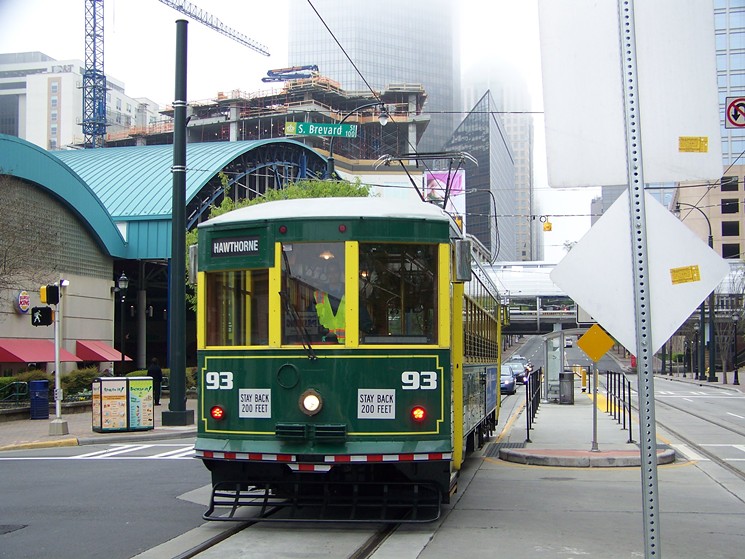 A streetcar named disaster.
Photo by Kristain Baty/Flickr
Fort Lauderdale spent a lot of money not building a streetcar system. The theme of transit in South Florida seems to consist of elected officials forgoing cheaper, tried-and-true methods of improving transportation in favor of costly projects that tend to fizzle out, leaving taxpayers holding the bag.

Such was the case in Fort Lauderdale, where city officials proposed an electric streetcar system called "Wave" that was supposed to mimic rail systems in Atlanta and Portland. The city promised for years that the system would connect people across Fort Lauderdale and cut down on traffic, but after years of empty promises, residents began to wonder if it was a good idea to begin with.

Critics questioned how useful a streetcar system would actually be in Fort Lauderdale, where it would share the road with cars and require chopping down a whole lot of the city's trees. One scholar called the project a "streetcar conspiracy" and postulated that it was just a way of funneling money to contractors.

In 2018, after more than a decade of planning and posturing by officials, the state shot down a $226 million bid to build the Wave — a price tag that was far higher than the original projected cost of $142 million. In the end, not a single piece of track was laid down, but contractors spent $33.7 million in tax dollars to perform assessments and planning over the many years of preparation.
KEEP MIAMI NEW TIMES FREE... Since we started Miami New Times, it has been defined as the free, independent voice of Miami, and we'd like to keep it that way. With local media under siege, it's more important than ever for us to rally support behind funding our local journalism. You can help by participating in our "I Support" program, allowing us to keep offering readers access to our incisive coverage of local news, food and culture with no paywalls.
Make a one-time donation today for as little as $1.