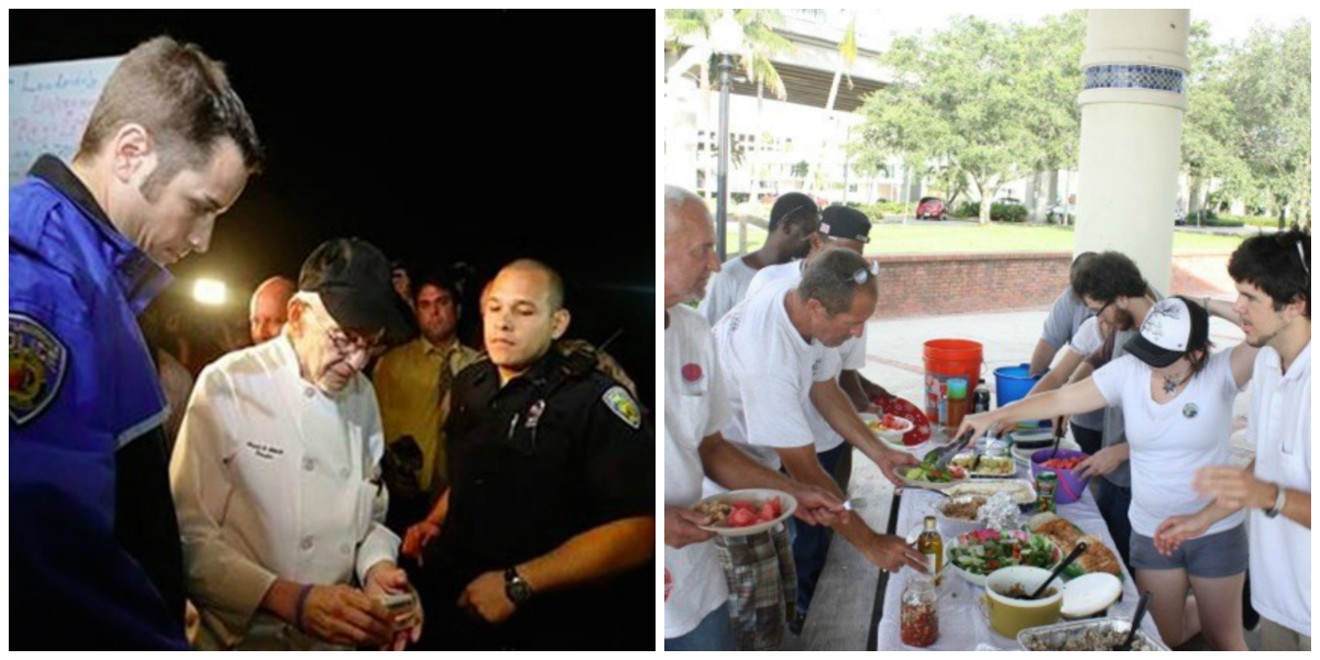 Arnold Abbott (left, center) was arrested at 90 years old for feeding the homeless in Fort Lauderdale three years ago. Facebook / Stefan Kamph
Remember three years ago, when the City of Fort Lauderdale passed a series of extremely restrictive laws that basically outlawed feeding the homeless in public, arrested a 90-year-old for giving food to the poor, and got slapped down by a judge in one of the biggest public-relations fiascos in Florida history?

Well, Fort Lauderdale apparently wants to repeat that nationally embarrassing boondoggle. After the city's so-called homeless hate law was nationally ridiculed for being spiteful and mean, the city commission will consider passing an amended version of that same law at its meeting tomorrow night.

In a memo to the commission, City Manager Lee Feldman wrote that the new crackdown was allegedly written in the name of safeguarding "the health, safety, morals, and general welfare of the residents and visitors of the City of Fort Lauderdale, as well as protecting individuals’ freedom of speech, assembly, and association."

But groups that feed the homeless in the city, such as Food Not Bombs, have already warned that the law is little more than a "sharing ban v2." Due to pending lawsuits, the original 2014 "sharing ban" is not being enforced. (A Food Not Bombs representative declined to speak to New Times because of ongoing litigation with the city.)

The new ordinance comes two months after the city reported itself to the Florida Department of Health in order to justify bulldozing a homeless encampment in Stranahan Park. (The city claimed the park was infested with rats, which might or might not have been true, but the complaint actually came from one of the city's own employees.) After homeless residents lost laptops, birth certificates, passports, and other vital belongings in the raid, the American Civil Liberties Union sued the city. That suit remains open.

But an ACLU lawsuit has not stopped the city from continually threatening to confiscate the belongings of displaced people and apparently pitching an entirely new version of the much-ballyhooed food-sharing ban.

The original 2014 law banned food-sharing events that were within 500 feet of residential properties, prohibited more than one sharing event to take place on a city block, forced sharing groups to warm food to specific temperatures, and outlawed giving food away without also providing bathrooms, hand-washing facilities, and trash cans for the homeless. (The rule exempted indoor sharing events from many of those restrictions.)

The proposed rules are nearly identical to the original, albeit slightly less severe: The new ordinance doesn't mandate bathroom and hand-washing facilities and technically doesn't set temperature guidelines for food preparers. The new rule does, however, include a provision forcing charitable groups to "have adequate storage of food from the time of preparation to the time of service."

Most notable, the new version, like the original, stipulates that if groups want to share food outdoors, they must obtain written consent from whoever owns the property where the food-sharing will take place. In Fort Lauderdale, the majority of sharing events take place on city-owned land: If passed, the ordinance would force charities to get written approval from city officials before offering the most downtrodden members of society a tray of baked ziti.

The original rule was proposed alongside a chunk of other laws designed to criminalize the act of being homeless. The laws outlawed placing bags on the ground, sleeping in public, and other acts that are simply unavoidable if you don't have a roof to sleep under.

The original ban passed at an October 21, 2014 city commission meeting, where scores of protesters asked Mayor Seiler and the commissioners how they could live with themselves.

"Hey, Jack, what do you say? How many homeless did you starve today?" protesters chanted, according to the Sun Sentinel.

But the bill also had a powerful South Florida force putting his thumb on the scale: Ron Book, one of the most powerful government lobbyists in the state. Book has run Miami-Dade County's Homeless Trust since 2004 and believes in funding social services for the homeless, such as shelters and drug-treatment programs, but Book also argues that local governments should make day-to-day street life for the homeless as difficult as possible to encourage them to find permanent housing. (In 2015, Book fought hard against a Miami-Dade measure to provide sleeping mats for the homeless; he claimed the mats would discourage displaced people from seeking help. He also fought a plan for outdoor bathrooms downtown Miami.)

But a month after the ban passed, Arnold Abbott, a 90-year-old advocate for the homeless, held an unsanctioned food-sharing event in the city. Rather than shooing Abbott away or just giving him a pass, Fort Lauderdale Police arrested him in one of the worst PR gaffes in state history.

A judge then placed a temporary ban on the ordinance, which stood until multiple groups, including Food Not Bombs, sued the city to strike down the law. Food Not Bombs' lawsuit is ongoing in the Third District Court of Appeals; the city cannot enforce the original ban until the lawsuits end.