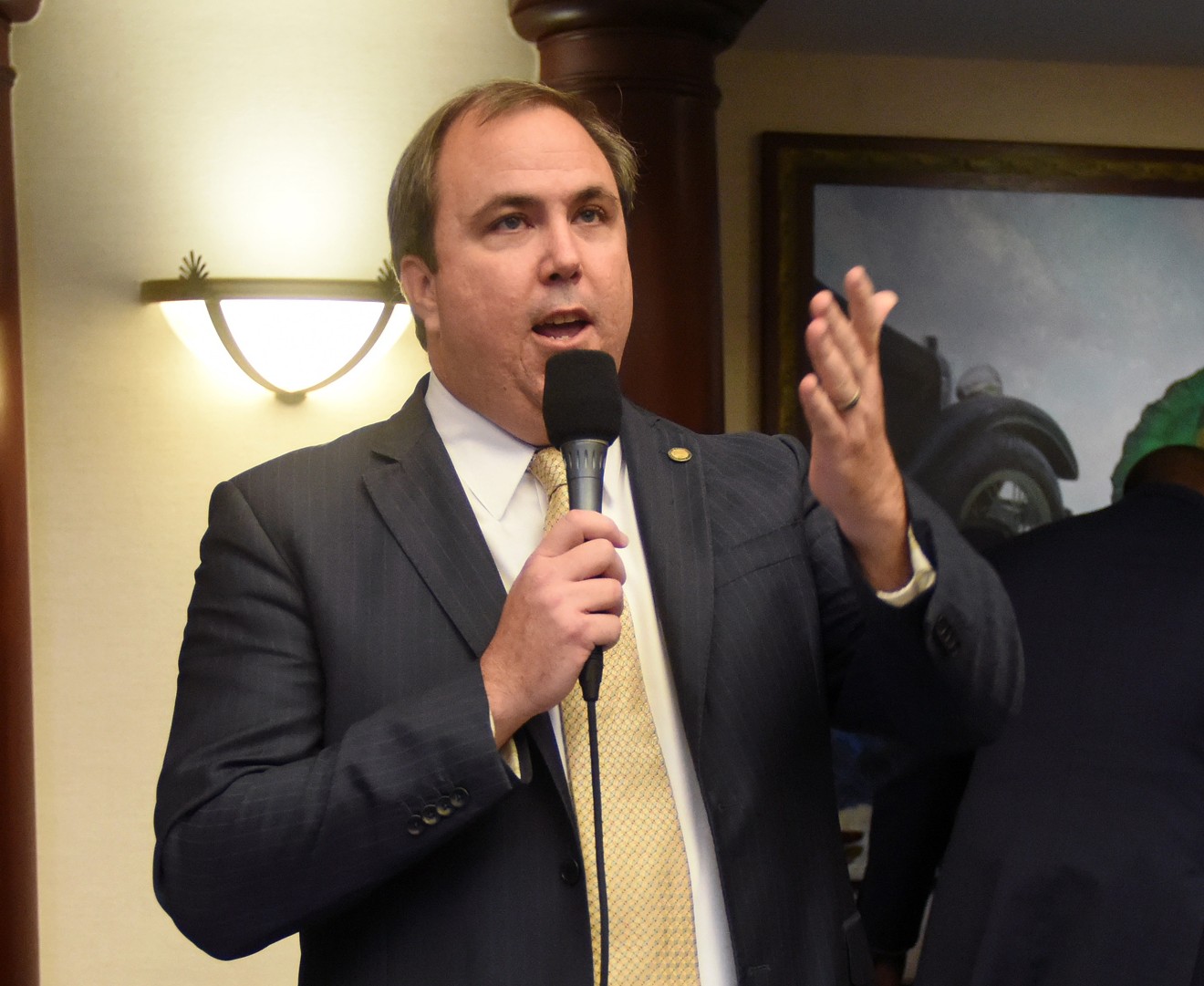 State Rep. Joe Gruters Florida House of Representatives
Florida finally has a champion to fight for the most unfairly treated group of people in America — white, Christian conservatives. State Rep. Joe Gruters filed a bill today that would add discrimination against "political affiliation" to the list of infractions Florida classifies as hate crimes, and though he insists the law would apply to both liberals and conservatives, Gruters' social media posts make it pretty clear which side he's worried about.

Gruters, a Sarasota Republican who chaired Donald Trump's Florida campaign, filed a draft of his bill today, though he has since withdrawn it to tack on additional penalties. He wants to add "political affiliation" to two Florida statues — one that requires the state to compile data on any hate crimes committed in Florida and another that ratchets up legal penalties for any crime committed as an act of hate.

The Anti-Defamation League does not include political affiliation on its list of recommended hate-crime classifications. The group also fought measures to classify crimes against Florida police officers as hate crimes because, again, no one is born a cop. Or a Republican. (Plus, it's still extremely illegal to murder people because you hate their political beliefs.)

Gruters stressed repeatedly in an interview with New Times that his bill is designed to protect both sides of the political spectrum from violence. But he hinted that the bill was inspired by recent violence at "political rallies,' and in light of Gruters' ties to the Trump campaign and his overall worldview, it's not difficult to extrapolate that he's filing the bill in response to the growing presence of Antifa, the left-wing group composed largely of anarchists who show up to counterprotest right-wing or neo-Nazi rallies.

"This is for both sides," Gruters says. "There's been so much passion on both sides, and the news has shown that there's been violence at some of these rallies. Specifically, we’ve seen some instances where people were wearing a certain candidate’s materials and they were targeted as a result."

Asked if he was referring to Trump voters, he declined to answer and instead stressed repeatedly that no one should be subjected to "political violence" no matter if they're on the left or right.

But hate-crime laws cover far more than out-and-out acts of violence: Though Gruters says his bill isn't designed to silence political speech, the state could, theoretically, charge people with hate crimes under its misdemeanor "stalking" or "harassment" statutes for verbally accosting someone over his or her political beliefs. Making someone feel "substantial emotional distress" for supporting Trump could be classified as harassment under the law — and with Gruters' hate-crime rules in place, this would count as a second-degree misdemeanor. The state hate-crime law also lets people sue for civil damages if they believe they've been wronged.

Moreover, a cursory scan of Gruters' political beliefs and social media history shows what he thinks is the source of that violence. While most of the rational world got upset because Trump blamed "many sides" for a neo-Nazi terror attack in Charlottesville, Virginia, more than a month ago, Gruters went on the record and backed up Trump's claims that the left was somehow at fault for egging on a Nazi terror attack.

"It's unfortunate that the episode this past weekend erupted into violence, and I do think both sides, even the local police chief, said that both sides kind of spurred on that violence," Gruters told Sarasota's ABC TV affiliate, WWSB.

In addition, his public feed is a cesspool of racist babble and sanctimonious, pearl-clutching conservative fear-mongering. Since Charlottesville, Gruters has shared multiple memes and images criticizing Antifa and zero critiquing Nazis. Gruters also regularly retweets alt-right commentator Jack Posobiec, a man who has repeatedly shared the "1488" numerical code for white supremacy and believes the "Pizzagate" child-molestation conspiracy theory is real.

"When someone's identity is attacked, it can create emotional and psychological problems, and society then can suffer and those people can become disempowered," said Gruters, who was first elected last November and sponsored a bill to ban abortion after 20 weeks of pregnancy. "It is the same as some of these other groups."

Except, of course, it isn't — and the bill instead seems designed to water down actual protections for people born into disadvantaged positions, until hate-crime laws apply to everything and therefore no longer mean anything at all.