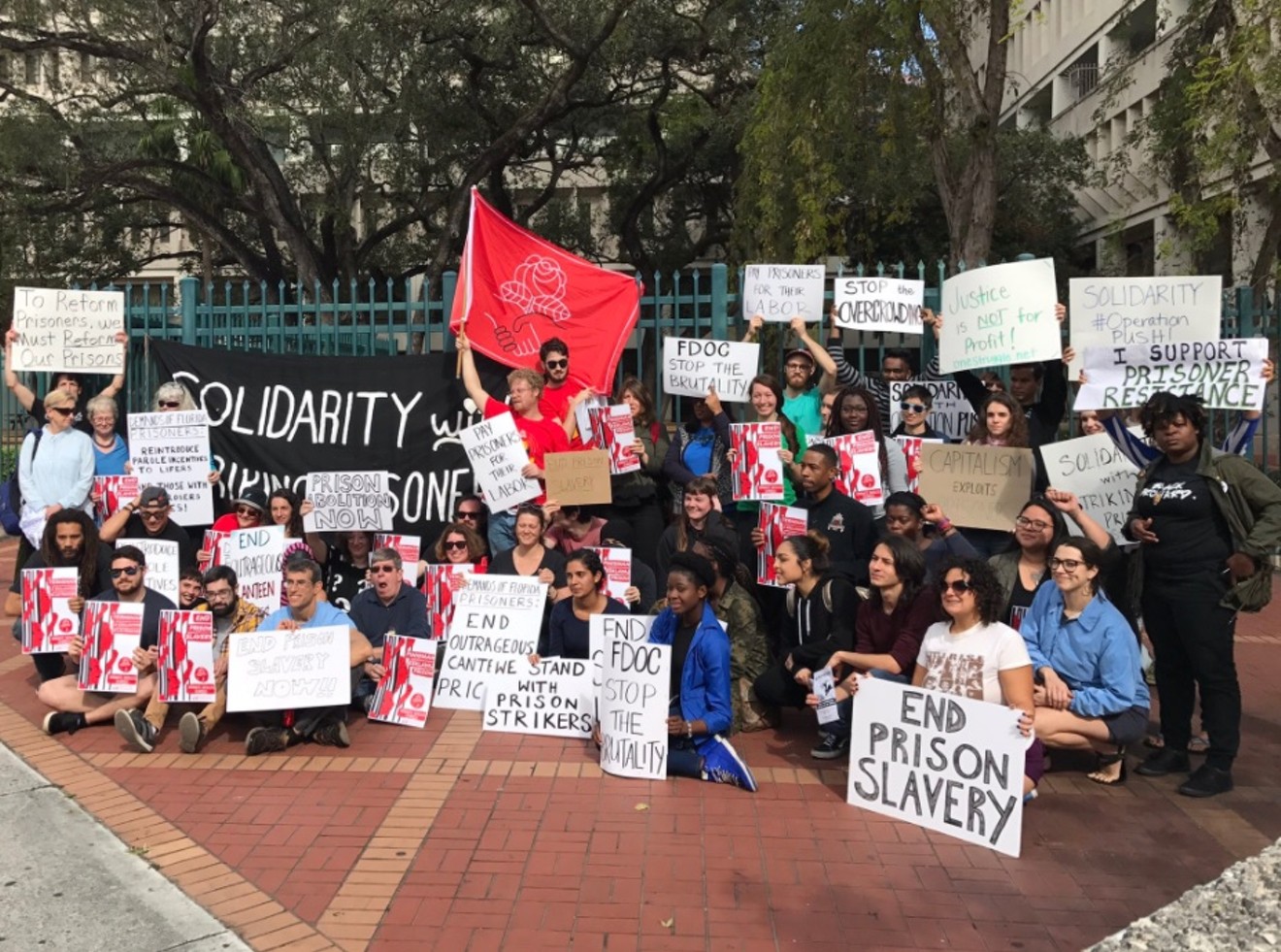 Activists gathered in downtown Miami on MLK Day to rally for #OperationPUSH. Courtesy of Tomas Kennedy
The Florida Department of Corrections remains adamant that "Operation PUSH," a statewide prison-labor strike designed to force state officials to treat prisoners better, never actually happened, even though prisoner-rights groups released a statement last week about the action. They say prisoners in more than a dozen facilities either went on strike or were preemptively punished to prevent them from doing so.

Now, the FDOC has confirmed that one of the strike's major organizers, state inmate Kevin "Rashid" Johnson, was formally charged with "inciting a riot" on January 10, simply because he announced the upcoming strike on the anarchist news website It's Going Down.

At approximately 6:17 am on Wednesday, January 10, 2018 while assigned to Florida State Prison as an administrative lieutenant, I received an email correspondence from warden B.V. Reddish. In the email an article was attached written by inmate Johnson that had been submitted to and published on https://itsgoingdown.org. Inmate Johnson’s article is titled, “Florida Prisoners Are Laying it Down”, and opens with the following statement: “During early 2018 prisoners across Florida are gonna ‘laydown’ in nonviolent protest of the intolerable conditions in Florida’s prisons.” This article is included with a series of other articles related to “operation push” which is a possible upcoming prison strike that is being planned by numerous inmates across the state of Florida. Inmate Johnson makes numerous allegations of mistreatment of inmates at Florida state prison and proclaims Florida to be the worst prison system of the four various states he’s been incarcerated in. The full article is attached to this report. This formal disciplinary report is in accordance with section 33-601.303, FAC.

Nowhere in any of Johnson's posts does he ever encourage prisoners to riot. In fact, he states numerous times that the strike was designed to be nonviolent. But state corrections officials are adamant that Johnson was somehow encouraging his fellow inmates to break stuff. The disciplinary citation also doesn't bother to mention any actual acts of "rioting."

"He a disciplinary report for attempting to incite a riot," a spokesperson in the FDOC Office of Communications told New Times yesterday. The spokesperson then linked to the FDOC's official Operation PUSH press release, which claims that no disturbances ever took place in the prison system.

In a follow-up phone call, FDOC spokesperson Michelle Glady said anyone promoting a "work stoppage," even if it isn't violent or riotous in nature, could be subject to a disciplinary violation. She did confirm that Johnson was issued a citation for promoting a protest.

She said inmates who have issues with the prison system are allowed to file complaints via a formal grievance process — but inmates, prisoner-rights groups, and other civil-rights activists have long maintained that those grievance processes are either ineffectual or a complete waste of time. Glady said the number of prisoners cited for promoting the protest has been small.

"This idea that they're being retaliated against, it's the lingo they're using to keep perpetuating that this event is happening," she said. "There is no retaliation happening at any of our institutions."


In a statement Johnson issued on the Campaign to Fight Toxic Prisons blog, he says he's merely being punished for exposing horrifying conditions in the prison system.

"The article does nothing but state the conditions that Florida prisons are protesting and confirms how vile those conditions are," Johnson wrote online. "Nowhere is anyone told to do anything. It is only a piece of journalism, which is constitutionally protected of speech and press. FDOC prisoners have no internet access, so how is something published online inciting prisoners? This is retaliation plain and simple for publicizing abusive conditions, and why and that FDOC prisoners are planning a protest."

This is far from the first time state prison officials have attacked their critics. After the Miami Herald exposed brutal conditions, a string of rapes and sexual assaults, and videos of children being groomed to fight one another in juvenile prison facilities, the state Department of Juvenile Justice issued a press release attacking the Herald's journalism instead of answering why so many children were filmed pitted against one another in literal fight clubs.


In post on Wednesday, the Campaign to Fight Toxic Prisons said that on January 19 Johnson sent his lawyers a message claiming he'd been "tortured" by state prison officials. The Campaign did not elaborate, but activists have said for weeks that inmates who have publicized information about the prison system have been placed in solitary confinement as punishment.

News has otherwise trickled out slowly about #OperationPUSH: The strike's organizers initially started the movement to demand fair wages for forced labor in prison facilities, increased access to parole, voting rights for ex-felons, and an end to prison-guard brutality. The FDOC claims no work disturbances ever actually took place, but in a January 19 memo to the public, prisoner-rights groups said they'd received letters from prisoners in 16 different facilities who say they'd either participated in a work stoppage or been preemptively punished for trying to do so.

"A common theme among report backs is the attempt by the DOC to sever communication in order to create the perception of inactivity and break the spirits of those participating in the strike," rights-groups wrote online. "Key contacts inside have reported being threatened by the administration with harsher retaliation if correspondence with advocacy groups such as Fight Toxic Prisons and Incarcerated Workers Organizing Committee continues."