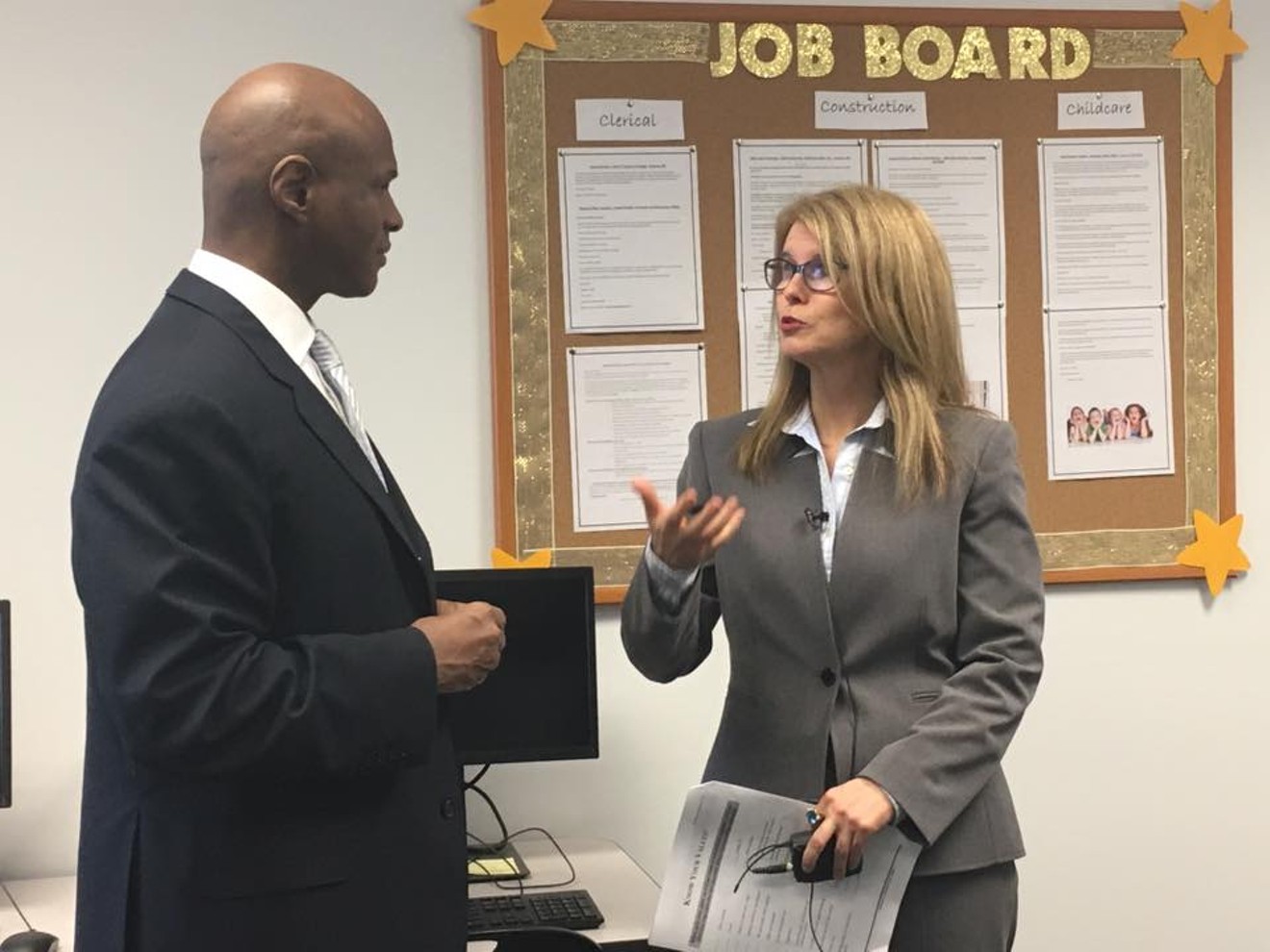 Mary Mayhew (right) when she ran Maine's Department of Health and Human Services. Maine DHHS
When Donald Trump chose Mary Mayhew to run the nation's Medicare and Medicaid programs in 2018, Maine residents were alarmed: From 2011 to 2017, Mayhew had run that state's medical programs. She was so psychotically focused on cutting medical programs for the poor that she became known as "Mary Mayhem." Oddly, she stepped down three months later.

That's a startling development, because Mayhew was accused of grossly Maine's Medicaid programs from 2011 to 2017. Most notable, the federal government in 2017 issued a scathing audit that critics say should have driven Mayhew out of public life for good. In August of that year, the feds found that, under Mayhew's control, Maine failed to follow federal and state requirements for reporting and monitoring sexual assaults, suicides, and injuries of residents with disabilities.

A DeSantis spokesperson did not immediately respond to messages from New Times asking if the governor was aware of the 2017 audit.

The feds studied two years of hospital data in Maine and uncovered 243 allegations of sexual abuse among patients with disabilities. Only five cases were referred to the appropriate office, according to the U.S. Department of Health and Human Services (HHS). Investigators couldn't determine whether 52 percent of the sexual assault cases were reported to any law enforcement agencies at all. Worse, the feds said Mayhew's department didn't bother to investigate the deaths of 133 Medicaid patients with disabilities.

"Therefore, Maine failed to demonstrate that it has a system to ensure the health, welfare, and safety of the 2,640 Medicaid beneficiaries with developmental disabilities covered by the Medicaid waiver," the federal government wrote.

Mayhew's career appears to define "failing upward": While she ran Maine's health programs under moon-bat-crazy Gov. Paul LePage, the state was hit with federal fines, scathing court orders, and various federal punishments for brazenly failing to follow laws over and over again when it came to treating sick Maine residents. While tearing apart the state's health-care programs, Mayhew found time in 2013 to beg Florida lawmakers not to expand medical coverage in this state. At the time, critics told the Miami Herald/Tampa Bay Times Tallahassee Bureau that Maine's and Florida's medical programs were vastly different and Mayhew had given “selective, skewed, and irrelevant" testimony.

Then came the HHS's Office of the Inspector General's cutting, 77-page report. It found that Mayhew's agency had left 2,640 Medicaid patients with developmental disabilities effectively to languish and die. A columnist for the Portland Press-Herald in 2017 called Mayhew's conduct "downright disgusting" and said she "ducked responsibility" for the deaths on her watch.

The federal government analyzed Maine hospital records from January 2013 to June 2015. Per the HHS report, disabled-services providers working with the Maine Department of Health and Human Services failed to report a full 34 percent of the 2,243 "critical incidents" that occurred in those two years. Inspectors noted that Mayhew's office did not force health-care providers to adequately keep records of the incidents.

The feds then reviewed each of the 133 improperly investigated deaths and found that "9 of the 133 beneficiary deaths were unexplained, suspicious, and untimely, and corrective action could have been taken." The report noted that some deaths were due to "preventable causes that... resulted from a lack of training of community residence staff or a delay in care." According to the report, some "mysterious" and "unexplained" deaths included cases where neglected patients choked, drowned in bathtubs, fell down stairs, and otherwise died without proper state reviews.

HHS investigators said they were also unable to figure out why Maine did such a poor job of documenting cases of or exploitation. The 2017 audit included a statement from one Medicaid recipient with disabilities who said a male staffer repeatedly assaulted her by grabbing her butt and  her thigh. The care provider neither investigated the incident nor reported it to . Instead, the provider accused the woman of fabricating the story.

Mayhew's office "did not provide a complete explanation of why it did not investigate all allegations of abuse, neglect, or exploitation, or immediately report such critical incidents to the appropriate district attorney’s office,” the report reads.

Mayhew didn't apologize. Instead, she took credit for somehow "cleaning up" Maine's health office. She then ran for Maine governor in 2018 and lost.
KEEP MIAMI NEW TIMES FREE... Since we started Miami New Times, it has been defined as the free, independent voice of Miami, and we'd like to keep it that way. With local media under siege, it's more important than ever for us to rally support behind funding our local journalism. You can help by participating in our "I Support" program, allowing us to keep offering readers access to our incisive coverage of local news, food and culture with no paywalls.
Make a one-time donation today for as little as $1.