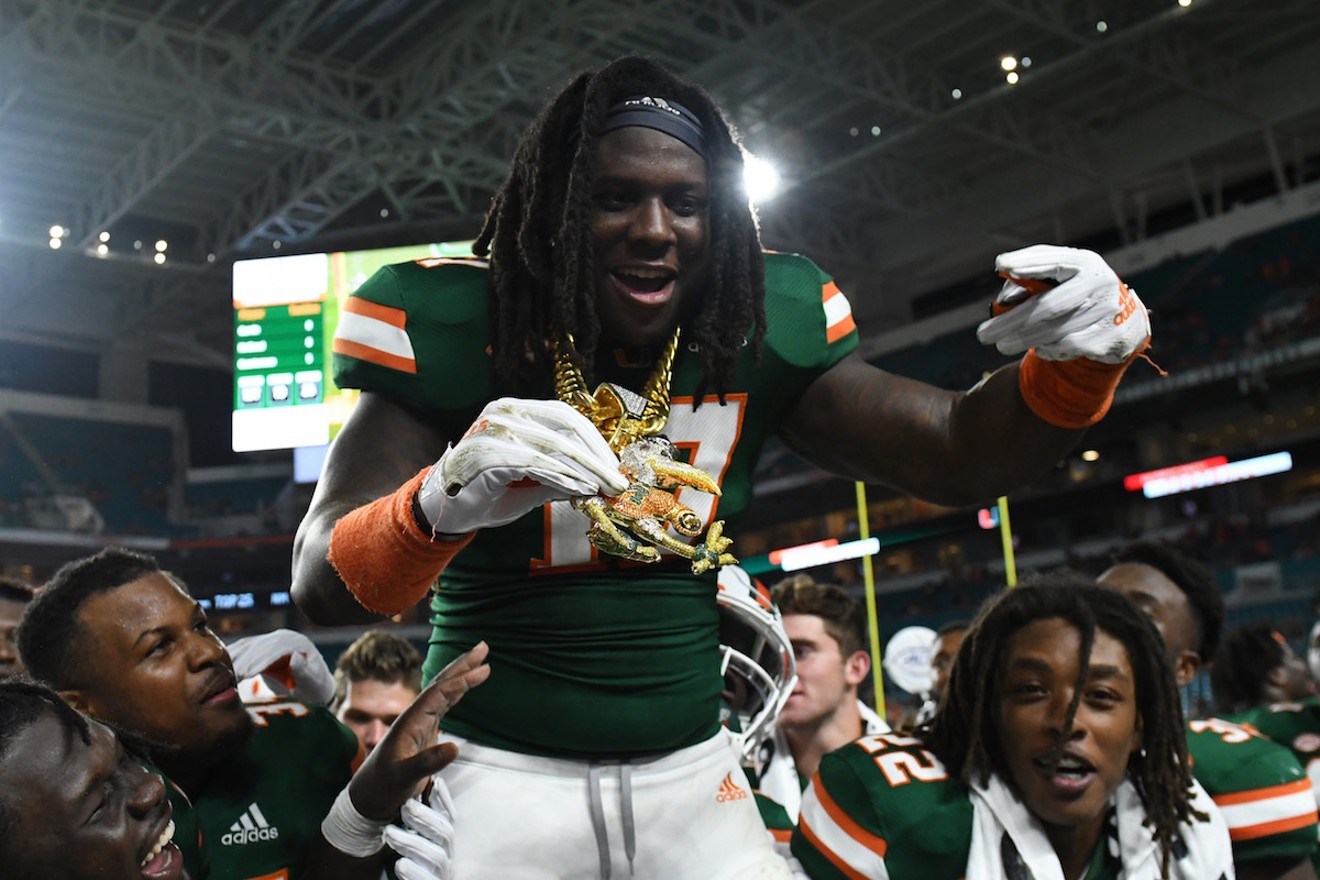 Photo by Eric Espada / Miami Athletics
The Miami Hurricanes' instant-classic 28-27 comeback win over the Florida State Seminoles last weekend marked the midpoint of the team's 2018-19 season. The now-15h-ranked Canes have reeled off five straight wins since their season-opening loss to LSU, putting themselves back within striking distance of their first playoff berth.

A shot at one of the final four spots in the national championship playoffs is definitely not out of the question this season. In fact, we at New Times are gonna go out on a limb and say it's likely the Canes finish the season ranked in the top four.

This is why fans should be confident this is the year the Hurricanes finally play for their sixth national championship. Yeah, it's only early October, but after beating FSU, we're feeling cocky.

Photo by Eric Espada / Miami Athletics
1. The Hurricanes' remaining schedule is cupcake city. The last remaining ranked team on the Canes' schedule is the No. 24 Virginia Tech Hokies. That's it. There are no late-season roadblocks — no Notre Dame or Florida — just a run-of-the-mill ACC schedule that includes Duke, Boston College, Georgia Tech, and Pittsburgh.

The Canes will be big favorites in every game they play the rest of the season. Any loss would be a pretty big upset. The coast is clear in the ACC Coastal Division for an ACC title game appearance.

Photo by Eric Espada / Miami Athletics
2. The easy schedule should make the Canes appear better than they actually are. Style points aren't supposed to count in college football anymore. Beating a team 77-7 is supposed to count as much as a 40-21 win. That's not the reality, though. Scoreboards will always matter, and Miami has a chance to beat up on some lesser competition while other teams face tougher games.

Miami is a flawed team. If the first 37 minutes of the FSU game didn't reveal that fact, you weren't paying attention. But having the best talent on the field versus lesser opponents can hide some holes while the Canes patch them up. In the meantime, big wins will have Miami in the Top 10 in no time.

Photo by Christina Mendenhall
3. LSU has a chance to make Miami's only loss look good. The LSU Tigers' loss to the Florida Gators this weekend hurt. If you're gonna lose, you want the team that beat you to win every other game — not just any games, though. You want the team that beat you to have a chance to beat the best. It's the only way to look good and win a title in a sport that almost necessitates you win every game to do so.

On the bright side, LSU has an amazing schedule ahead — as far as the Hurricanes are concerned.

LSU still has No. 1 Alabama, No. 2 Georgia, No. 22 Texas A&M, and No. 24 Mississippi State left to play. If the Tigers find a way to even win three of four of those games, they'll be in the Top 15, if not higher, and Miami's lone loss will look much better.

Photo by Eric Espada / Miami Athletics
4. The committee will give Miami the "ratings" tie-breaker if all things are equal. Everyone used to hate the Canes. Miami was the team that got the crappy end of the stick when it came to polls. Miami fans always felt like there was a conspiracy when it came to many breaks that didn't go their way. Not anymore. Miami is a draw on TV, so the committee will undoubtedly give UM the go-ahead in front of a team like Central Florida or Mississippi State if all things are relatively equal.

Thanks to the turnover chain, Miami is the "it" team right now. America tunes in to see the Canes. Like them or hate them, they get your attention. If you don't think their popularity factors into decisions with the higherups in college football, you haven't noticed how much they love money.

Photo by Eric Espada / Miami Athletics
5. Defense wins championships. Offense comes and goes, but defense is the surest way to win a championship. Miami very well might have the best defense in the nation. If the Canes defense isn't the absolute best in all of college football, only another title-contending team, such as Alabama, will claim that crown.

Miami is now known for one thing: the turnover chain. As fans saw last Saturday against FSU, just one turnover-chain appearance can flip a game on its head. Though the Canes have growing pains on the offensive side of the ball, their defense will keep them in most games. By the time the Hurricanes face a team that has the firepower to beat their defense, UM could be in the college football playoffs.
KEEP MIAMI NEW TIMES FREE... Since we started Miami New Times, it has been defined as the free, independent voice of Miami, and we'd like to keep it that way. With local media under siege, it's more important than ever for us to rally support behind funding our local journalism. You can help by participating in our "I Support" program, allowing us to keep offering readers access to our incisive coverage of local news, food and culture with no paywalls.
Make a one-time donation today for as little as $1.