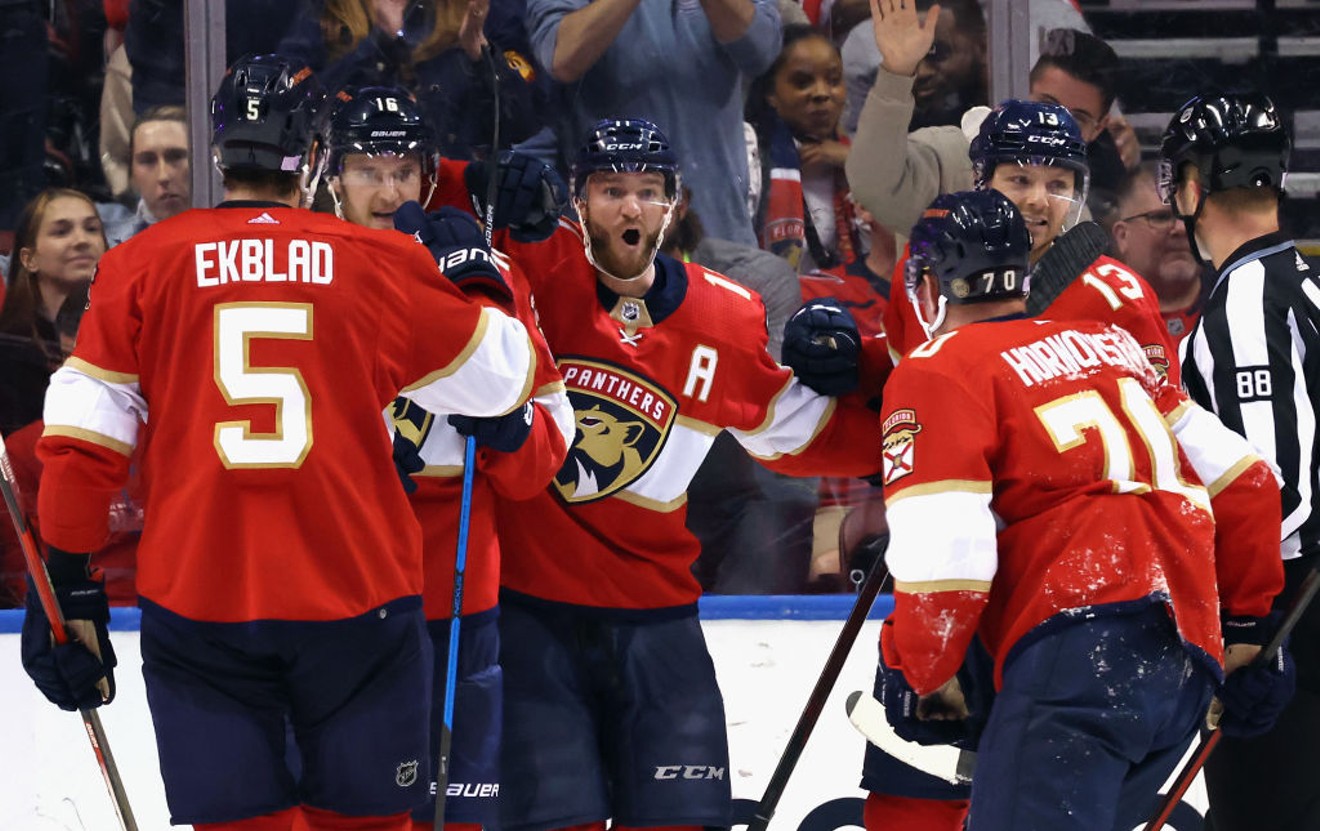 The Florida Panthers celebrate a goal against the Washington Capitals on November 4 at FLA Live Arena in Sunrise, Florida. Photo by Bruce Bennett/Getty Images
Are you a disgruntled Miami Dolphins fan sick of all the losing and the Deshaun Watson rumors?

Maybe you're a Hurricanes fan who can't bear to watch Manny Diaz coach another game.

Perhaps you're a Marlins fan who's sick of being told your baseball team is two years from being two years away.

Well, Miami sports fans, we have just the thing for you: Introducing the Florida Panthers, a professional hockey team just up the turnpike in scenic Sunrise, Florida!

Anyone can turn their attention to the Miami Heat when things go sideways in the fall. But maybe — just maybe — this is the year you should give South Florida's National Hockey League (NHL) team a bigger slice of your attention. Here's why.


This is the best team the Florida Panthers have ever put out on the ice. Get on board before the bandwagon fills up.

There Is No Better Time to Jump on the Bandwagon

If you've lived in South Florida for years but never paid much attention to the Panthers, now would be as good a time as any to go ahead and fix that. You'll be jumping on the bandwagon at the most optimal time.


The Panthers are likely going to be one of the best teams in the NHL this season. If you're looking for some relief from all the losses the Hurricanes, Dolphins, and Marlins have brought into your life, tune into some Panthers games and enjoy some much-needed breaths of fresh air.

We promise no one will judge you if you get onboard now.

Also holy shit, small sample size and all but Aaron Ekblad is currently the best player in the NHL (by @EvolvingHockey’s GAR metrics) pic.twitter.com/RmmT76H9JT

The Panthers Already Have Elite Talent on Their Roster

If you listen to Manny Diaz speak about the Hurricanes' issues, his promise is that things will get better one day once the current kids he recruited graduate, move on to day jobs, and new recruits come. It's never his fault; he just needs better talent. The Marlins have been promising to spend on talent for years. Maybe it's this offseason? We won't hold our breath. The Dolphins? They'll be blowing first-round picks under GM Chris Grier until 2030 at this rate.


The Panthers already have the league's best talent, and it's locked up for years.

Aaron Ekblad and Aleksander "Sasha" Barkov are elite NHL players you can bank on being in Sunrise each season. Barkov, specifically, is just getting a new eight-year deal. Pair these two stars with an assortment of other talented Panthers and you have a solid core.

The Panthers are the closest thing South Florida has to a "Big 3" right now.

If you're going to invest in another South Florida team and open yourself up to (let's face it) more pain, it's nice to know the teams' decision-making is in good hands. In GM Bill Zito, the Panthers have one of the best front-office minds in all of pro hockey.


From re-signing Sasha Barkov to drafting Spencer Knight to picking up Ryan Lomberg to trading for players like Sam Bennett, it seems every button Zito has pushed in his time with Florida has hit the right note.


The Panthers Own the Best Rivalry in South Florida Sports

Not only that, but there is actual fighting involved (as opposed to a bunch of grown men pretending they want the smoke yet knowing that it'll never come to that).

A Panthers-Lightning game is without a doubt the best ticket in town right now.

The next faceoff will take place on Saturday, November 13, at Amalie Arena in downtown Tampa.


Casual reminder Goldie is the best we have down here. https://t.co/biin7FPsLW

The Panthers Have the Best Play-by-Play Voice in Town

Let's be honest: The Miami Heat is no longer the best television team in town. The Florida Panthers hold that title with the incredible calls of Steve Goldstein.


The Marlins are a veritable revolving door of barely listenable talent, and there is no local Dolphins TV team. The Heat have made many changes to both their television and radio broadcast as of late, and it shows. It's the Panthers who consistently offer the most exciting and well-thought-out viewing experience these days.

There is a new king in town.
KEEP MIAMI NEW TIMES FREE... Since we started Miami New Times, it has been defined as the free, independent voice of Miami, and we'd like to keep it that way. With local media under siege, it's more important than ever for us to rally support behind funding our local journalism. You can help by participating in our "I Support" program, allowing us to keep offering readers access to our incisive coverage of local news, food and culture with no paywalls.
Make a one-time donation today for as little as $1.