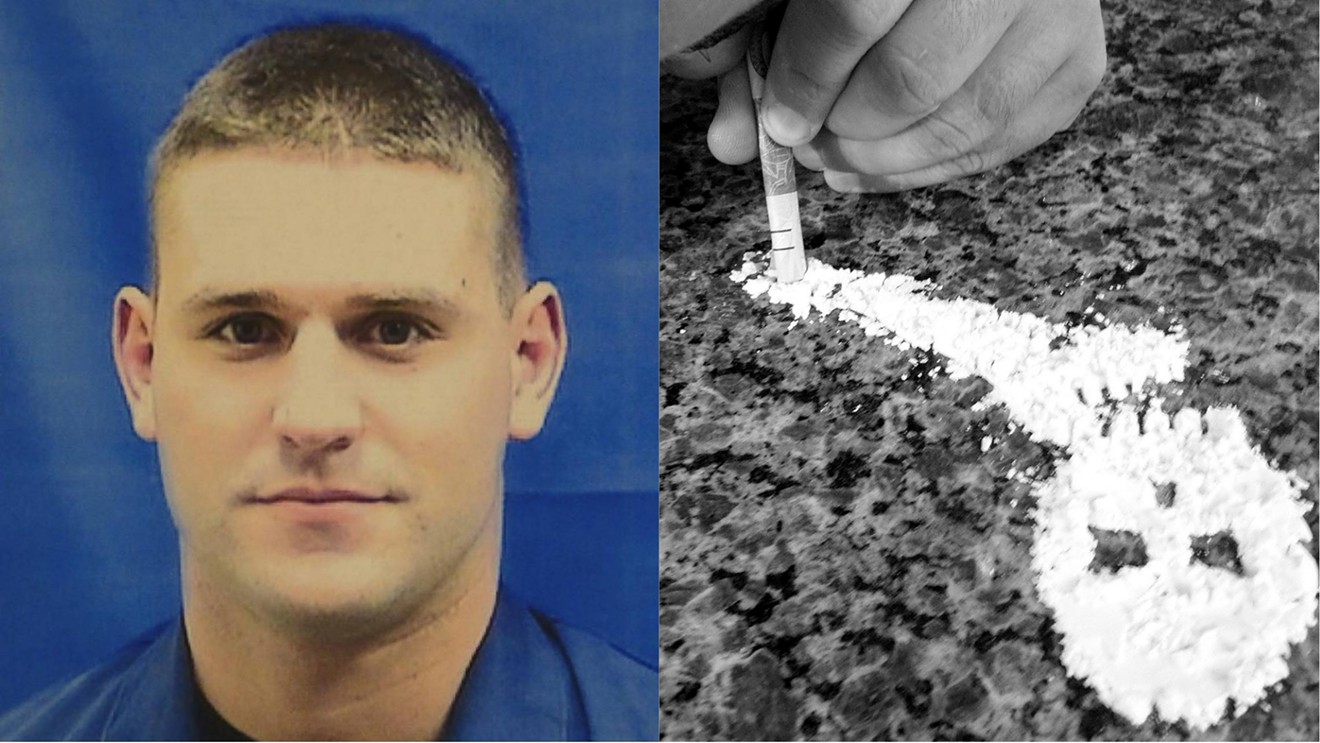 Miami Cop Adrian Santos was arrested on cocaine possession charges this week. City of Miami / Imagens Evangelicas via Flickr
There's nothing inherently wrong with doing drugs — as long as you're not in the business of arresting other people who do drugs. This has been the dilemma for Miami-area cops since the city's cocaine explosion began in the '70s and '80s: Getting paid to bust people for drugs is never quite as fun as doing or selling them.

But to make something of an understatement, Santos is far from the first Miami-area cop to (allegedly) dabble with nose candy in his spare time. Here are a few other cases that prove the War on Drugs is a bunch of hypocritical nonsense:

Adam Tavss, Miami Beach's 'Killer Cop,' Arrested With Hydroponic Marijuana Grow Lab In House
Acting on a tip, Miami Dade police raided Tavss' house in West Kendal around 4:30 p.m. yesterday. Inside the suburban home, cops found a "clandestine" lab with 47 plants, worth about $50,000 on the street.

Tavss' arrest is just the latest head-snapping turn in a case that began last June 14 when the cop shot to death a tourist from Virginia on Washington Ave., and then four days later killed another man on the MacArthur Freeway.

Both shootings were extremely questionable — you can read our full feature on the unanswered questions in the case here. And they looked even worse for the Miami Beach PD when Tavss resigned in November after getting caught with pot in his system.


2. Four cops from 2010 to 2012 were arrested for conspiring with drug dealers for a little extra cash:

[Hialeah Gardens Officer Larry Perez's drug-related arrest] — outlined in interviews and hundreds of pages of court documents — opens a window onto what has become an increasingly common tale in Miami-Dade: cops turned by greed or desperation into working for the drug dealers they're supposed to be busting. In the past two years, federal prosecutors have charged four Dade-area cops, including Perez, for helping dealers. The others are:

• Miami Police Officer Roberto Asanza, arrested last June after the FBI found ten bags of cocaine and two bags of marijuana from a drug bust in his truck. A yearlong investigation revealed Asanza had swiped the drugs and given them to an informant. Asanza pleaded guilty to a misdemeanor charge in exchange for helping in another case.

• Miami-Dade Police Officer Daniel Mack, indicted April 11 for helping a Miami Beach code inspector transport what they thought were more than a dozen kilos of cocaine in exchange for $25,000. He was charged with four counts of cocaine possession with intent to distribute. His trial is pending.

3. In 2014, the feds arrested a Miami-Dade County Police lieutenant for allegedly running drugs and plotting a murder for a Dominican gang:


Until yesterday, Lt. Ralph Mata was the picture of an upstanding Miami-Dade cop. He was a top leader in Internal Affairs, spending his days going after corruption and abuse in the ranks. He'd earned exactly one mention in the Miami Herald in his career, for helping to lead a feel-good drug bust in Carol City.

But Mata had a secret double life, prosecutors say. To a violent Dominican gang, he was better known as "the Milk Man" and spent years feeding police intel to the drug-runners, buying them guns, protecting shipments, and even concocting a murder plot.


New Times interviewed 40 law enforcement officers and federal agents (nearly all of whom requested they not be identified) and criminals, and reviewed hundreds of pages of public records. What emerged was a pattern of suspicious behavior in the north district substation, and an equally disturbing unwillingness on the part of the Miami department to actually investigate its own. New Times met with Miami Police Chief Raul Martinez; Maj. Paul Shepard, in charge of internal affairs; and Maj. Adam Burden, commander of the north district substation, seeking their comments and allowing them time to refute any allegations. They asserted that any problems at the substation involve a select few officers. They also stressed that all claims of misconduct are thoroughly probed. "Many of those allegations were investigated," Chief Martinez said. "It's one thing to have an allegation and another to prove it."

But a series of arrests this past year only exacerbates suspicions about the substation.

In November north district Ofcr. Webert Celestin was charged with stealing money from an undercover agent posing as a drug dealer. In May Ofcr. Damon Woodard, from the same substation, was charged with narcotics trafficking after South Carolina police say they found five kilos of cocaine in his car. In August Soyica Mincy, a civilian secretary in the department's headquarters, tried to lure a north district officer into a conspiracy involving Mincy's boyfriend to steal from drug dealers, according to prosecutors. Instead the officer turned in Mincy.

And in February of last year Danny Felton, a former north district cop once honored as officer of the month, had his police certificate stripped by the Florida Department of Law Enforcement following five-year-old allegations he stole money from an undercover FBI agent posing as a drug dealer.

The department's supervisors dismiss the arrests, saying they represent only isolated instances of corruption and don't reflect the north district substation as a whole. "Those cases are not connected," internal-affairs boss Shepard says. "There is nothing to indicate a conspiracy. And there is nothing to indicate lack of supervision is leading officers to do this. Unfortunately we have a couple of bad apples."

But that's not the way some within the department view things. "The whole attitude is, “Yeah, the north end has a bunch of corrupt cops, but we can't do anything about it,'" says a high-ranking member of the department. "The administration needs to go in there and clean house." (Of the four cases mentioned above, only two investigations were generated from within the department: Celestin and Mincy.)

5. And, most notable, there's the case of the so-called Miami River Cops, a group of 100 officers arrested for various charges, including robbing drug dealers of money and cocaine:


In the fifteen years since prosecutors opened the shameful chapter in South Florida history known as the Miami River Cops scandal, about 100 officers have been arrested, fired, suspended, or reprimanded. At least 20 have been sentenced to prison for robbing cocaine dealers of cash and dope. Some are now free men; others are still in the slammer.

It seems as though at one time or another every law-enforcement agency in Miami has investigated some aspect of this case, from county police to the FBI, the State Attorney's Office, and the U.S. Attorney's Office. A river of paper winds from Miami to West Palm Beach to Washington, D.C.

Now, twelve years after Miami's own "trial of the century," the Miami-Dade State Attorney's Office is taking a closer look at a small yet chilling tributary. The new probe focuses on an alleged incident in early 1987, when three River Cops and two accomplices are said to have plotted to murder a man who was preparing to testify against one of them in another case.