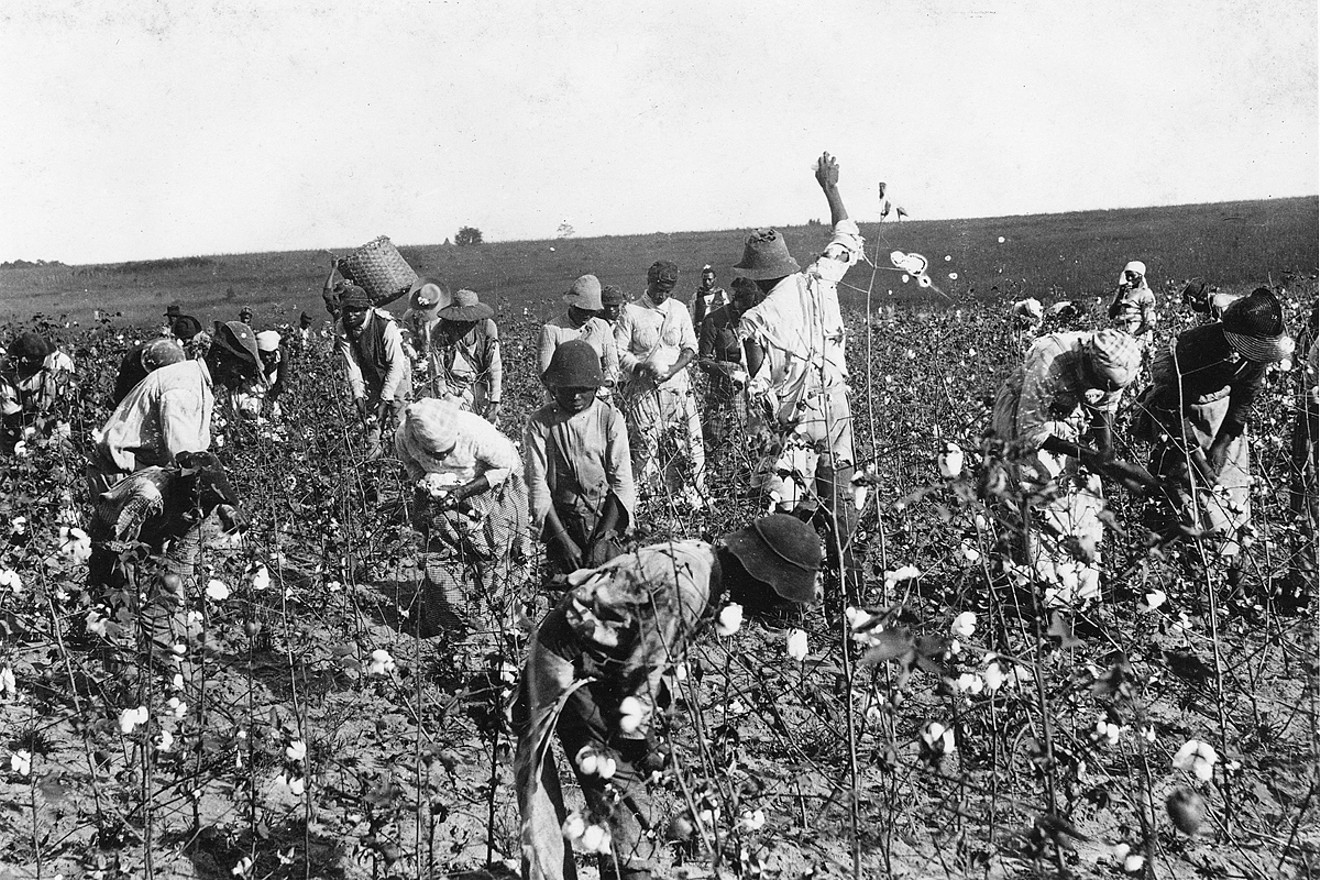 Former slaves pick cotton in Jefferson County in the 1890s. See more photos of Florida's black history here. Photo via State Archives of Florida
Unsurprisingly, most public schools don't teach children the full horrors — or even the economic extent — of American slavery. That basic fact sparked the New York Times' landmark "The 1619 Project," a series of reports and essays that aimed to teach Americans, as simply and effectively as possible, that the nation's lofty founding ideals were marred by and cannot be separated from the fact that, from 1619 until the end of the Civil War, wide swaths of the U.S. economy were based on the fact that white people could own black people and force them to work.

But as New Times recounted this week, Florida's history of slavery is even more interesting than that of other states, because the Sunshine State was originally a Spanish colony. As New Times reporter Jess Nelson noted, the first slaves reached what was then Spanish soil in 1526 — nearly a century before enslaved Africans landed on British soil. Even most native Floridians likely don't know the state's full story of slavery, so here's a handy breakdown of the most eye-opening facts in Nelson's report this week:

1. The Spanish brought the first slaves to the colony of La Florida in 1526, nearly 100 years before traffickers took slaves to the British colonies in 1619.


San Miguel de Gualdape marks the beginning of the black struggle for freedom and equality in the United States as the site of the first recorded slave rebellion, described by historian Guy Cameron in San Miguel de Gualdape: The Failed 1526 Settlement Attempt and the First Freed Africans in America. It remains unknown if the men and women who escaped that day survived, whether by creating a home for themselves or by joining local Native American tribes. But if they did, the first permanent settlement of the United States founded by outsiders would not have been European — it would have been African.

The precise location of the settlement remains lost to history and might have been as far north as present-day Georgia, which was at the time part of the Spanish Empire. San Miguel de Gualdape was a failed colony, but it was the beginning of what would become centuries of black slavery in the South.

"Florida Spanish territory was involved in the slave trade, and that influence begins in the beginning of the 16th Century," says Nashid Madyun, executive director of the Black Archives and Research Center at Florida Agricultural and Mechanical University (FAMU). "Yes, slavery predates 1619 in America. As history goes on, dates and cornerstones tend to become muffled. The important thing is not the date, but to have a conversation about oppression and how people have elevated themselves above it."


2. The Cape Florida Lighthouse in Bill Baggs Cape Florida State Park was the site for the underground "saltwater railroad."

In 1693, the Spanish crown officially began offering asylum to runaway slaves as long as they converted to Roman Catholicism and served in the military for four years. That policy — an attempt to destabilize the economy of the British colonies farther north — led Spanish Florida to become a haven for runaway slaves in the 18th Century. Fort Mose, located near St. Augustine, in 1738 became the first authorized free black settlement in what would later become the United States.

But that freedom did not last. Free men, women, and children risked re-enslavement after the signing of the Adams-Onis Treaty in 1821, which effectively made Florida a U.S. territory that allowed slavery. The first of the state's slavery statutes would be enacted the following year, so black Floridians began to meet up on the beaches of South Florida to flee the country to safety in the Bahamas, where they made a new home for themselves.

"There are descendents of enslaved African-Americans that escaped to freedom on Andros Island today," George says.


3.  The U.S. Sugar Corporation was indicted for still using slave labor in the 1900s.


Black slaves would become the predominant labor force of the cotton and sugar plantations that sprouted throughout the Sunshine State, a system remembered today in the names of towns such as Plantation. Florida was part of the Deep South's Cotton Belt, but it was also home to sugar plantations both large and small. The harsh conditions of enslavement on sugar plantations is widely acknowledged by historians as being even worse than those on the cotton fields. Newspapers from the era carried ads of slave owners looking to buy and sell humans, and wills often contained instructions on how to train child slaves.

"We have a responsibility to learn so we can clearly see our future and not repeat the past," Madyun says. "America needs to look at the truth."

Even the Emancipation Proclamation did not end Big Sugar's use of slave labor in Florida. The U.S. Sugar Corporation was indicted for enslaving black sugarcane workers on Florida plantations as late as 1942, nearly 80 years after President Abraham Lincoln decreed "that all persons held as slaves... shall be free." In his 1989 book, Big Sugar: Seasons in the Canefields of Florida, New Yorker staff writer Alec Wilkinson found that Florida's sugar industry still treated its predominantly Jamaican cutters as slaves, a problem that lingers today with migrant farmworkers.


4. The Ku Klux Klan once drove out the entire black population of Ocoee after killing 30 to 60 black residents on Election Day in 1920.


Dozens of African-Americans lost their lives that day after armed white citizens descended upon Ocoee to disrupt the black vote. Hundreds more fled as black homes, businesses, a school, and a church were razed. Burned bodies were found in their smoldering homes the next day. Perry was shot and wounded before being arrested and placed in an Orlando jail cell. The following morning, his lynched body was found riddled with bullets and hanging from a light pole. Nobody was ever arrested for his murder.

Although the government refused to investigate the obvious violation of the Fourteenth Amendment, NAACP investigators suggest anywhere from 30 to 60 Ocoee residents were killed that Election Day. The entire black community was driven out, and Ocoee remained a "sundown" — a place where African-Americans were warned to get out by nightfall — for decades thereafter. No black person lived in Ocoee again until the 1980 U.S. Census.

"It was decided with a great deal of heat to prevent the blacks from voting, which was done," wrote Zora Neale Hurston, who interviewed survivors of the Ocoee massacre the following decade as part of the Federal Writers Project of the Works Progress Administration (WPA) for the State of Florida during the Great Depression.

The 2020 presidential election will mark the 100th anniversary of what historian Paul Ortiz calls the "single bloodiest day in modern U.S. political history."


5. When the Civil War broke out, Florida's elected leaders loved having slaves.


"The rapid spread of Northern fanaticism has endangered our liberties and institutions, and the election of Abraham Lincoln, a wily abolitionist, to the Presidency of the United States of America destroys all hope for the future," John C. Pelot, a slave owner from Alachua County, said in his opening statement as chairman of the convention January 3, 1861.

Slavery was the central reason Florida would become the third state to secede from the United States that year. The men who met at the Tallahassee Secession Convention said so themselves, according to Journal of the Proceedings of the Convention of the People of Florida, written by William S. Harris, the convention's secretary. John C. McGhee, who was elected president of the convention, concurred.

"At the South, and with our People of course, slavery is the element of all value, and a destruction of that destroys all that is property," McGhee said following his induction January 5. The same day, Florida began discussions with Alabama, Georgia, and South Carolina — the beginning of the Confederacy. McGhee testified that "the institution of domestic slavery is recognized, and the right of property in slaves is expressly guaranteed" in the U.S. Constitution. If that guarantee were to be stripped, McGhee asserted that "slave states will withdraw their political connection from the non-slaveholding states" to "establish another Confederation."