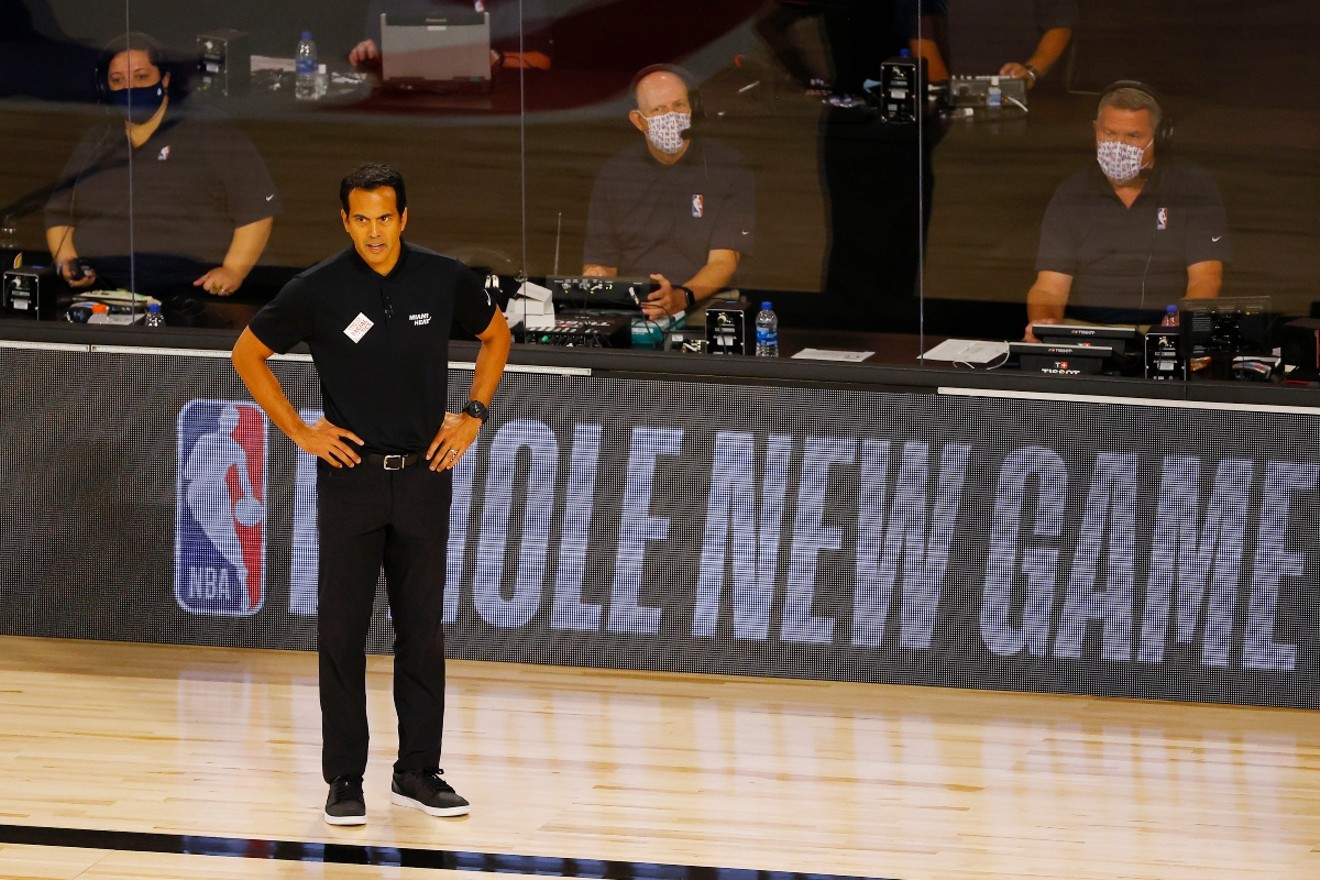 Cheer up, Heat fans. Photo by Kevin C. Cox/Getty Images
Prior to Wednesday night's 118-96 loss to the Los Angeles Lakers in Game 1 of the NBA Finals, it wouldn't have been earth-shattering news if the Miami Heat were to enter tonight's Game 2 in a 1-0 hole.

Unfortunately, the devil is in the details when it comes to the context of what the Heat are facing if they are to rebound from the loss. It was bad, and tonight is a must-win if Miami wants to remain in this fight for an NBA championship.

From Bam Adebayo and Goran Dragic leaving Game 1 early owing to injuries and being labeled doubtful for tonight's Game 2 to LeBron James and Anthony Davis looking like a well-oiled basketball machine, there isn't a lot of hope floating around the Heat's chances to win an NBA title right now. Heads are down and bad vibes are abundant.

Have no fear, though, depressed Miami Heat fan. We're here to do what a good friend does: pick you up off the hardwood, kiss your boo-boos, and tell you everything is going to be all right. Even if we don't fully believe it ourselves.

Here are five reasons Heat fans should remain positive heading into Game 2 against the Lakers. Now cheer up!


We might want to appreciate the fact that it took until the NBA Finals for this Heat team to actually trail in a series.

If the Heat somehow manages to win tonight's game by one point on a half-court three at the buzzer, it's 1-1. This isn't Olympic gymnastics. There are no style points involved.

LeBron recalls Game 2 of the 2011 Finals where the Heat blew a late lead to Dirk's Mavs. pic.twitter.com/FzYV1Y75pa

Even LeBron James knows this series is far from over. If LeBron James is well aware that any team can flip a series on its head in the course of a few minutes of basketball, who are we to doubt such a truth? LeBron is still haunted by the demons of the 2011 NBA Finals. Miami held a 1-0 lead over the Dallas Mavericks and got out to a big lead in Game 2, only to be engulfed by an avalanche of Dallas Mavs jumpers.

The Heat looked just as unbeatable in that series through six quarters as the Lakers did last night. By the end, the Mavs hoisted the trophy.

It's a long series.

The Heat's young core is getting an amazing education. Win, lose, or draw, the young players who've carried the Heat all season are getting quite a trial by fire, one that will pay dividends in the future. This is the sort of advantage you can't buy and that isn't available unless you work for it.

Tyler Herro, Bam Adebayo, Duncan Robinson, and Kendrick Nunn are playing in the NBA Finals. Come next season and the season after, playing the Raptors in Round 2 of the playoffs will feel like light work compared to battling LeBron and the Lakers. If this ass-kicking continues, it will be one that advances the Heat farther in the long run. Settling for less won't be an option after getting a taste of the last dance.


Bam (neck strain) and Dragic (torn plantar fascia) are both listed as doubtful for Game 2 vs. Lakers pic.twitter.com/xtccGO77SF

The Heat have built-in excuses if they lose. If you're going to lose, a good rule of thumb is to always be prepared to make excuses for losing. It's the honorable thing to do. For the Miami Heat, this will not be a tough exercise. They came out of Game 1 like the two teams had been involved in a UFC fight.

If the Heat loses, it wasn't fair. That's what we'll be telling everyone, anyway. It's more fun when you can't admit the other team is better!


There's gonna be a lot of Miami Heat doom and gloom today. Don't fall victim to it. Don't let a bad game -- or series for that matter -- make you forget what this team has done or is capable of


Cheer up! The Miami Heat are in the NBA Finals, right?! Let's do a flow chart. Is your team the Miami Heat or Los Angeles Lakers? No? The chart just took you to "You're not in the NBA Finals, so shut it." No matter what happens the rest of this series, the Miami Heat already put on a show. They won the Eastern Conference as a fifth seed. They endured months away from their families in the Orlando bubble. They once again proved that the much-talked-about "Miami Heat culture" is a real thing.

Go ask an Atlanta Hawks fan or New York Knicks fan how they'd feel about losing in the NBA Finals. I bet they'd pay for floor seats to watch their teams lose by 50 against the Lakers.
KEEP MIAMI NEW TIMES FREE... Since we started Miami New Times, it has been defined as the free, independent voice of Miami, and we'd like to keep it that way. With local media under siege, it's more important than ever for us to rally support behind funding our local journalism. You can help by participating in our "I Support" program, allowing us to keep offering readers access to our incisive coverage of local news, food and culture with no paywalls.
Make a one-time donation today for as little as $1.