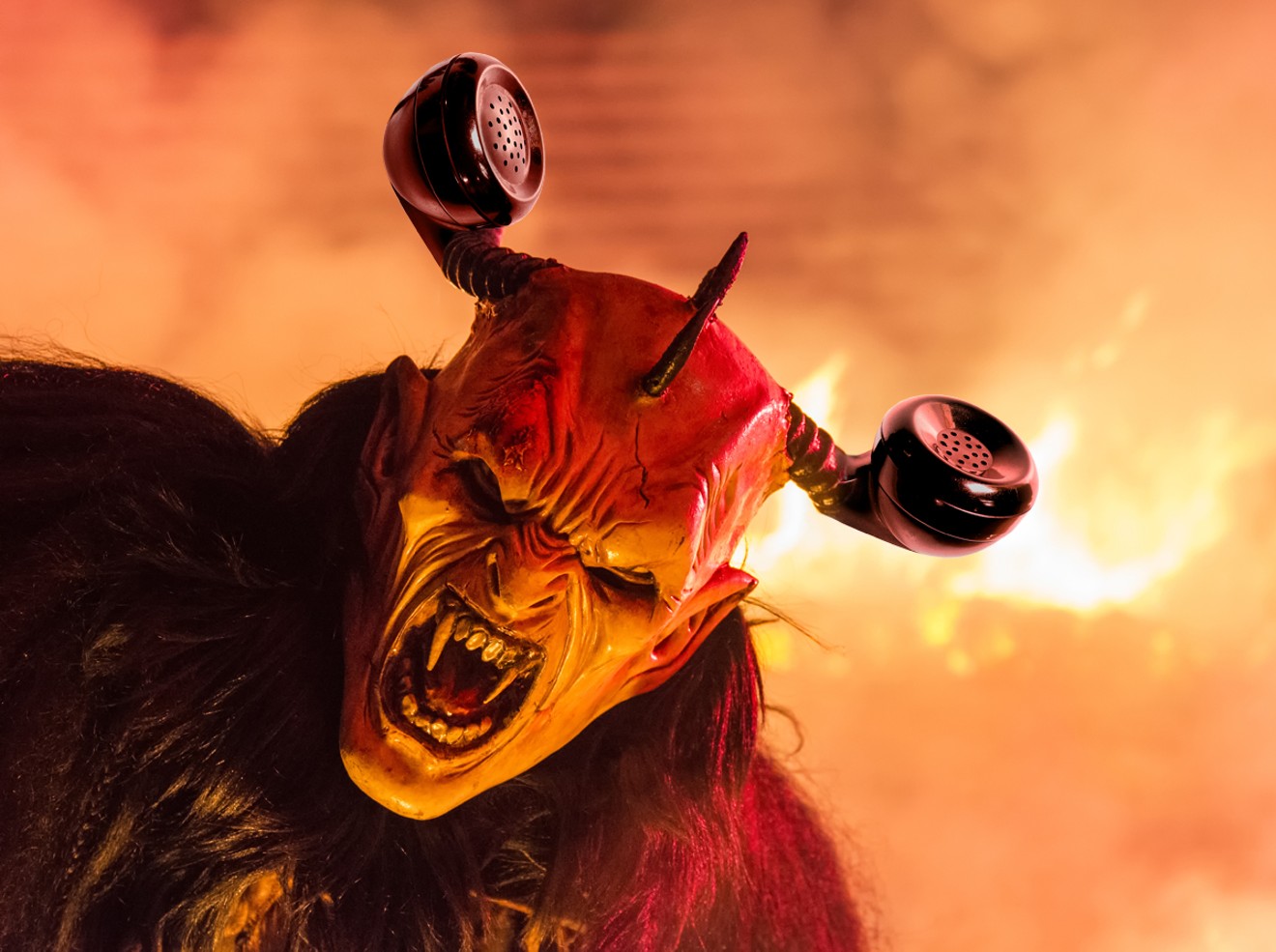 New Times photo illustration / Source images via Shutterstock.com
Somewhere across the mystical Acheron, the "river of woe," deep down in the darkest pits of the Malebolge, the undead servants of Hell are picking open a new prison in Cocytus, the frozen lake where God has permanently trapped Satan in the Homeric underworld. They await the arrival of a new Prince of Darkness, a Bringer of Sadness, a Miami man named Adrian Abramovich, who is accused of making 96 million illegal telemarketing robocalls in just three months — many to people whose numbers were on the mythic National Do Not Call Registry. As if this couldn't get worse, Abramovich was allegedly spoofing victims' caller ID systems in order to trick people into signing up for time-shares.

Yesterday the Federal Communications Commission said it had proposed a $120 million fine against Abramovich, that trickster-god, in what the FCC has called "one of the largest — and most dangerous — illegal robocalling campaigns that the Commission has ever investigated." Abramovich was allegedly even sending calls over emergency phone lines used for medical professionals and hospital call centers.

According to complaints sent to the FCC, homeowners have said for years that robocalls have been trying to get them to sign up for fake free trips or vacations. The robocalls would tell the victims to "press 1" to hear more about exclusive vacation deals with companies such as TripAdvisor, Expedia, Hilton, and Marriott and then route anyone who fell for the scam to a call center, where the perpetrators would try to hook gullible customers into buying time-shares that had nothing to do with those companies.

Eventually, TripAdvisor got wind of the illegal calling campaigns and launched its own investigation, which traced the calls back to Abramovich, who ran a company called Marketing Strategy Leaders out of 2000 Bayshore Dr., a swanky address in the gated Coconut Grove community L'Hermitage. In April 2016, TripAdvisor tipped off the FCC.

The robocalls also directed the victims to various travel websites, which the FCC alleges were all also linked to both Abramovich and the executives at a Mexican resort chain called Sunset World Group, which was where the victims were actually being offered time-shares.
In December 2016, the FCC obtained Abramovich's call records from October through the end of that year — and found he was making more than 1 million robocalls per day.

"On December 13, 2016, Bureau staff subpoenaed Abramovich’s call records for the three-month period from October 1, 2016, to December 31, 2016," FCC documents released yesterday read. "According to subpoena responses received by the Commission, Abramovich, purportedly doing business as Marketing Strategy Leaders, made 96,758,223 calls during this time period, averaging over a million calls a day."

Abramovich was allegedly using what's known as "neighbor spoofing," in which a caller matches his or her area code to the victim's location in order to increase the likelihood that a person will answer a random phone call. This is illegal, and the FCC says Abramovich committed wire fraud.

Here are some notes from customers, including a few who presumably screamed themselves hoarse into the phone after pressing 2 to "unsubscribe," only to learn the button did nothing:

Abramovich can still argue against the FCC's proposed fine; it's not clear if he has an attorney. There's no listed phone number for Marketing Strategy Leaders in state business records.