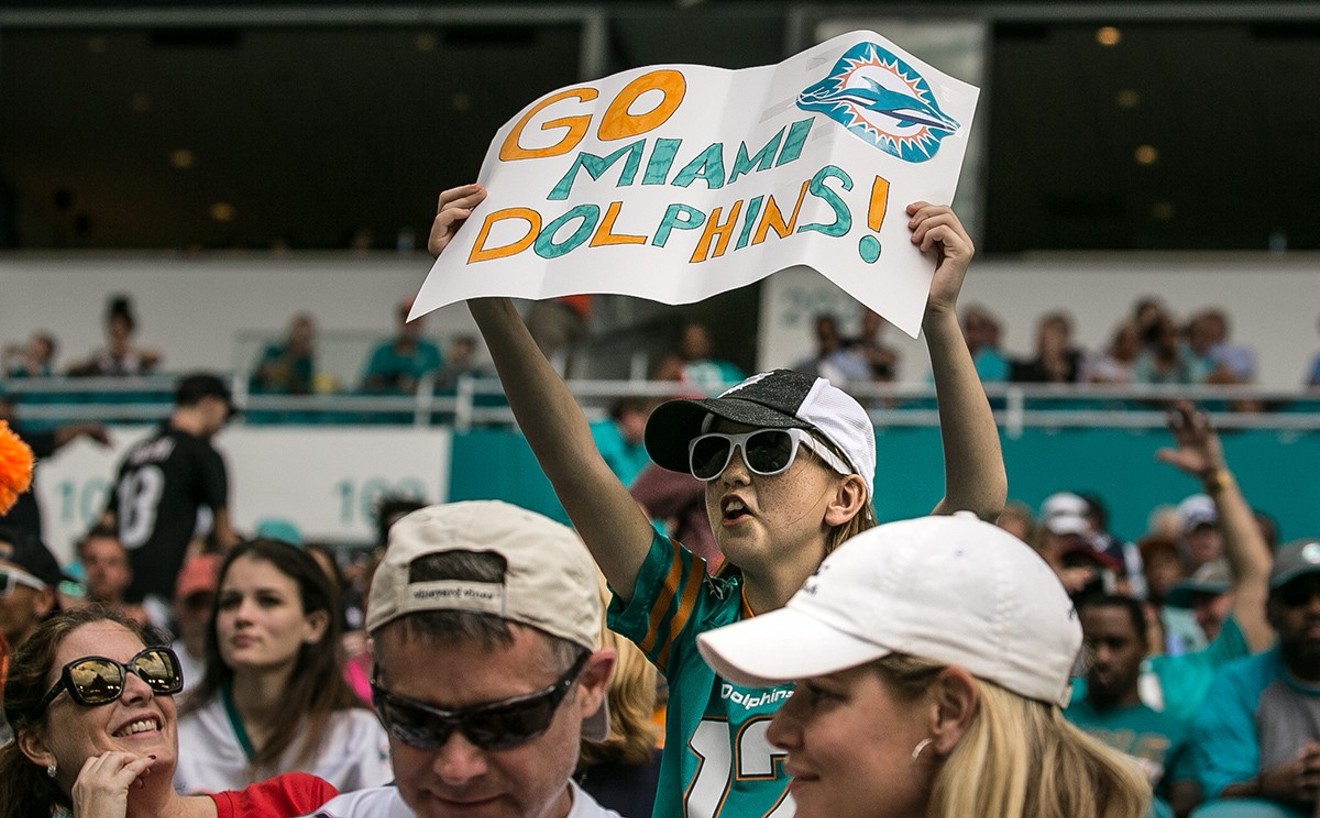 Photo by George Martinez
Miami has the Dolphins, the greatest football team. To some, those are the opening lyrics to the best fight song of all time: "Miami Dolphins Number One," penned by Lee Ofman prior to the Fins' undefeated 1972 season. To others, that sentence is a good sign someone needs to be Baker Acted or has been in a coma for the past three decades.

The Dolphins are not the greatest football team, nor are they currently number one. To fans, however, those lyrics are embedded in their brains like a '90s Backstreet Boys song or "Jingle Bells." Whether the Dolphins go 17-0 as they did in 1972 or finish 1-15 as they did in 2007, after every touchdown, the same song plays: "Miami Dolphins Number One."

To get everyone on the same page, here are the lyrics. Apologies for ruining the rest of your day because there is zero chance this song won't be playing in your head for the next 24 hours.

Miami has the Dolphins
The Greatest Football Team
We take the ball from goal to goal
Like no one's ever seen
We're in the air, we're on the ground
We're always in control
And when you say Miami
You're talking Super Bowl

It's truly a masterpiece, a gem, a classic, if you will. It's so good that covers of the song litter YouTube. Every kind of Miami Dolphins fan can be found giving their own rendition of the song. Here are some of the best:

1. Bad Bruno's garage-rock version. Here we have a garage band, apparently named Bad Bruno, rocking out the folksy classic. We don't hate it, to be honest. It kind of slaps. We will allow it. We've certainly heard worse versions of the Dolphins theme song. These guys seem like some Dolphins fans we would chill with, just a bunch of bros who grew up on Dan Marino and bleed orange and aqua.

2. This drunken casino-band version. There's no good way to set up what you're about to watch. You'll just have to watch it for yourself. The best way to describe this version is it's basically what you would expect to hear if you requested this song from a cover band playing inside a casino. Everyone in this video needs an Uber, like four drinks ago.

"A" for effort here. You have to respect the passion.

3. This cut-and-paste interview version. Here we have a YouTuber who was able to cut up interview clips from the players, coaches, and front office to make it seem like they are "singing" the fight song. You've seen this before on Jimmy Fallon's show and stuff like that. Our biggest question: Who found the time to do this? It seems like a lot of work.

The least fun part about this version is all the ghosts from Dolphins past who make appearances. We want to scream at them: "You're all going to be gone soon — go for it on fourth down, dummies!"

4. Cookie Monster's version. No big deal, just Cookie Monster signing the Miami Dolphins fight song. That's a sentence you definitely thought you'd read this week, right? This clip is 34 seconds, but if you're on acid, it probably feels like 34 minutes. You have to admire the imagination behind this one. It's kid-friendly and psychedelic at the same time.

This version is so good yet so bad it's like watching The Room somehow.

5. T-Pain remix. One of Stephen Ross' first moves after buying the Dolphins was to have T-Pain remix the team's fight song because, obviously, that was the new owner's most pressing order of business. Everyone hated it — not like didn't care for it, but absolutely hated it. When this song played for the first time at a game, it was as if fans were angry there was nothing to throw their beers at. Some people definitely poured beer into their ears to make it stop.

This version has been rightfully buried and can be found only deep on YouTube. Another move by Ross that hit the spot!


6. This kid's version. One of the best things about the Dolphins fight song is that a 2-year-old can learn the lyrics in a day. Because of this fact, many parents have forced their children to perform the tune on the internet for the entire world to see forever. The results are cute but also a little like hostage videos.

Kids are the future. Teach them the Miami Dolphins fight song before they know any better. Brainwash them so that our legacy of pain lives on for generations.

7. This relaxing road-trip version. Here's a version that, for whatever reason, will remind you of a road trip. It just feels like this cover should be playing while you and your family ride to the Keys. It's very relaxing. This version definitely goes deep-sea fishing and listens to Jimmy Buffett while wearing a Guy Harvey shirt.

There really is a cover of the Dolphins fight song for everyone, from T-Pain to this tune. It's no wonder Kanye West once called "Miami Dolphins Number One" the most versatile song he's ever heard.

8. This folksy version. Oh, hell yeah. This Mumford & Sons-esque version of the Dolphins fight song is the best. This song is so folksy it's wearing a flannel shirt and ordering a craft beer from a food truck in Wynwood. This version pays $6.69 for a cup of coffee that has a tree leaf scrawled in the foam. This version is vegan and recycles.

This guy definitely believes what he's signing, which is a bit worrisome. Literally no one is talking Super Bowl when they are talking Miami Dolphins, but this guy seems to really think they are. Good for him.
KEEP MIAMI NEW TIMES FREE... Since we started Miami New Times, it has been defined as the free, independent voice of Miami, and we'd like to keep it that way. With local media under siege, it's more important than ever for us to rally support behind funding our local journalism. You can help by participating in our "I Support" program, allowing us to keep offering readers access to our incisive coverage of local news, food and culture with no paywalls.
Make a one-time donation today for as little as $1.