County Details How It Could Sell Parts of Library, Courthouse, County Hall to Developers

The county says these nine public properties could be sold or leased to developers. Miami-Dade County
Any sane person running Miami-Dade County would take a look at downtown's traffic-clogged streets and crane-packed  and realize developers are already running roughshod over the town. Such a reasonable leader might understand that failing to regulate sprawling developments had left the city in dire need of more open, green space.

Instead of engaging in this sort of self-reflection, though, the county will release a report this month that's pretty much the opposite. The report suggests selling off 2.8 million square feet of public land to developers, who, like hyenas, would be able to pick apart taxpayer-owned assets and build close to 20 million square feet of development on top.

The report, which embattled County Mayor Carlos Gimenez's office will present to the commission at its upcoming March 7 meeting, floats the idea that the county could sell off 2 million square feet of publicly owned land, including the entire Miami-Dade County Courthouse and portions of the property on which County Hall and the main library stand. In exchange, the county would let private developers build anywhere from 12 to 19 million square feet of private space.

The "sheer size of the space, with an opportunity to participate in up to 13 to 19 million square feet of development in the prime, urban core, could be used as an enticement to a developer/investor who would partner with the County in a master-planned, long-term project," the report says.

According to the memo, the county commission in 2014 requested a report on which downtown properties could be sold or redeveloped. It took just more than two years to compile the data.

But the idea seems remarkably one-sided. Sure, some properties — the courthouse especially — are old and crumbling. But it's unclear why the private sector is any better suited to revamp the property than the public, except for the fact that private developers could make some cash from the deal.

It's also unclear what (besides money) the county thinks it could gain by selling off or leasing other taxpayer-owned assets such as the Miami-Dade Cultural Center — the Spanish-style piazza where the library sits. The report says the county could mandate that developers build space for government uses, such as a courthouse. But the report mostly discusses selling county land for cash in order to let developers build commercial properties. 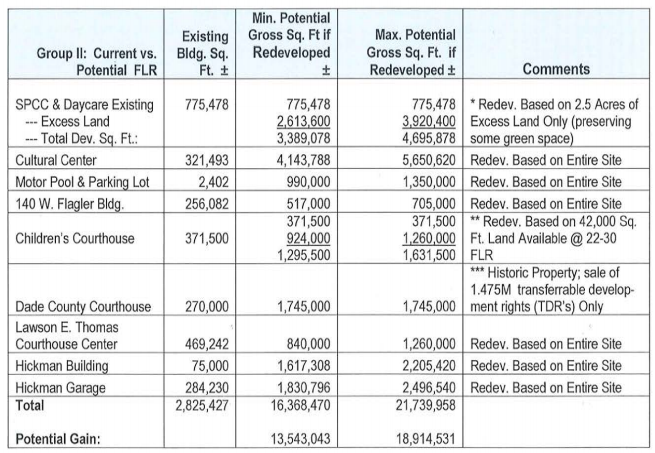 The county says these nine public properties could be sold or leased to developers.
Miami-Dade County
"Given its exclusivity and development potential, the Cultural Center property [where the library sits] could be used as an enticement to a developer, who would lease the land from the County (estimated via appraisal at $11 million per year in ground rent), construct their own private development, and in turn build a civil courthouse for the county on excess land at the Children's Courthouse or Motorpool sites," the report says.

The study also floats the idea of selling "air rights" for developers to build above the existing Miami-Dade Courthouse, for example. The paper also suggests rezoning land set aside for "civic institutions" in order to "maximize property value and achieve the highest economic use."

The authors stress that they're simply spitballing ideas — and that if any land is sold off or leased, the trades wouldn't all happen at once.

But in the grand scheme of ideas designed to strengthen the public sector, this concept seems particularly regrettable. Selling off a prized asset like an entire courthouse for a lump sum of cash might be helpful in the short-term — but once that money gets burnt up, the county can't get its building back.

Oh, and in case anyone is confused as to what these leases would end up looking like, the county already floated the idea in 2015 of selling parts of the Cultural Center property to just full-on build a high-rise on top.