The Spy Left Out in the Cold: Bay of Pigs Vet Bernardo de Torres Died Alone 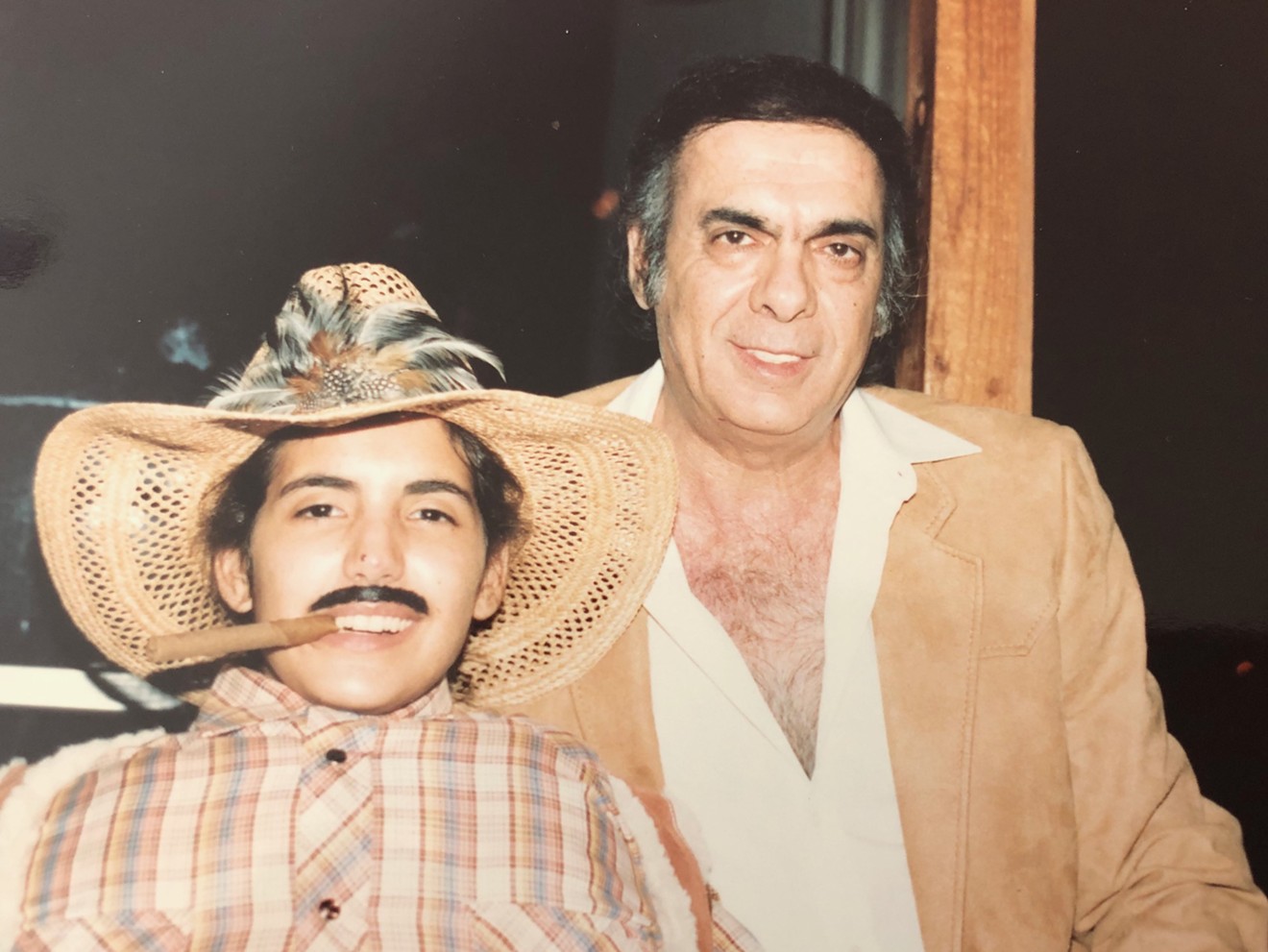 Bernardo de Torres with one of his children on Halloween at the Mutiny Hotel circa the 1980s. Courtesy of Owen Band
At first, no one knew the name of the 84-year-old homeless man who slept in Barnes Park, was hit by a car, and quietly died in a hospice in the dead of winter. Every death is a tragedy; every life has a story.

But days after his death this past December 2, he was identified as Bernardo de Torres, once the head of intelligence for Brigade 2506, the Cuban patriotas who landed at the Bay of Pigs in 1961 with hopes of overthrowing Fidel Castro. Bernardo was taken prisoner and was only released after the personal intervention of President John F. Kennedy.

If his story ended there, his life would have had some historical importance. But there was more. So much more.

My friend Bernie was a subject of investigation by both the House Select Committee on Assassinations and by the Warren Commission, which probed Kennedy's murder. He worked for New Orleans District Attorney Jim Garrison as an investigator in a separate probe of Kennedy's killing and funneled information back to his handlers at the CIA. Even today, the FBI and CIA have classified files on Bernie.

Bernie’s resume, if he had one, would have included his career as an arms dealer in South America with ties to the head of Mexican police intelligence. He might have left out the number of times he was questioned in homicide cases in Dade County, Florida.

And then, there were the rumors. Bernie was an international assassin and a high-level federal informant, they said. In reality, no one knows everything about Bernardo’s story. I’m reminded of that line from the Jimmy Stewart movie The Man Who Shot Liberty Valance: "When the legend becomes fact, print the legend."

Bernardo de Torres was my friend, mentor, and at times my surrogate father. We met when I was floundering, a year after I had been dropped off the waitlist at Harvard Law School and suffered a nervous breakdown.

Long ago, after four months hanging around my neighbor’s pool, I spent $125 to become a bartender at a new nightclub called Club Alexandre located in the Omni Hotel. The crowd included Miami’s top marijuana importers and their crews, who introduced me to cocaine.

Soon I was dabbling in the drug business to support my habit. I was even recruited to help unload a freighter full of marijuana anchored out in the Gulf Stream. I quit the Alexandre in 1978 and took my act to the infamous Mutiny nightclub in Coconut Grove, which served as the model for the Babylon Club in the movie Scarface. One night, I was at the bar, talking loud, and soon I was surrounded by five beautiful waitresses. An older man sitting nearby took notice, and I was summoned to his table.

Bernie was sitting there with his back to the wall at his permanent table, Johnny Black in hand, with three ice cubes. He wore a black polyester Members Only jacket, a black shirt, and muted grey slacks, his cordovan half-boots barely containing his Beretta.

He unconsciously fingered the green and yellow Santeria beads wrapped around his wrist as he stood up to greet me and shook my hand. “My name is Bernie,” he said. “You want to do some coke?

Soon, it became a nightly affair, then a ritual. Bernie and I sat together, kept a room in the hotel above the club, womanized, snorted cocaine, and hung out with whichever cocaine trafficker or celebrity was visiting the club. He liked that I was college educated and Jewish like his son. I'd befriended several members of Brigade 2506 while working at Club Alexandre, especially Rafael Villaverde and the son of the former president of Cuba.

Bernie rarely opened up. Eventually, he talked about certain events in his past but left out what he did for a living. I was one of the few people he would allow to drive him home since he was afraid of people knowing where he lived. As a bonus, I got to meet his daughters and son.

Soon others at the Mutiny became comfortable around me. Bernie told them I was his nephew. During this period of my life, my dad and I weren’t communicating. In some respects, Bernie acted as a surrogate father. I was approached by top members of various smuggling groups, including that of Willie Falcone and Sal Magluta. I don’t think Bernie was happy with my decision to take that route with my life, but he never criticized me. Instead, he offered advice on everything from how to spot an undercover cop to how to kill someone with a single blow to the head.

Later on, I saw some of what Bernie did. One time I went with him to pick up half a million dollars in cash. Another time, he gave me a Glock and asked me to watch his back when he went to meet a couple of his “hermanos” at three in the morning in Little Havana.

When I had a problem with someone owing me money, Bernie volunteered to go “talk” to him. When the Coconut Grove Marina had a gun show, Bernie took me there and secured a handgun for me. Later, he taught me to shoot. I was never comfortable with this.

One time, Bernie convinced me to take part in a Santeria ritual. Although he was a santero, he wanted the service to be performed by his babalao. I dressed all in white and wore the colored red and black beads of
Changó and the green and yellow beads of Orula. When Bernie picked me up, his only advice was to hide my Jewish star. “This isn’t your bar mitzvah,” he said.

Bernie and I remained tight for more than 25 years and I often turned to him for advice. I know without him, I would have been killed, ripped off, or sent to prison. In 1989, I was close to getting arrested and might have faced a 45-year sentence. Soon after that, I was involved in a major car accident. Bernie was one of the few people who visited me in the hospital.

Bernie concluded it was time for me to move on with my life. I was never cut out for drug dealing, he said, and I was smart enough to make it legitimately. He had never told me this before, he added, because I wasn’t ready to listen. And then Bernie calmly pulled out a copy of a file on me. I glanced at the information and was shocked. There was grand jury testimony about me going back to 1978. There was also a list of my known associates and a report on my near arrest in New Orleans two months before. When I asked him where he got it, he wouldn’t answer.

So who was Bernie really? He told me once he had photographs of Dealey Plaza during the Kennedy assassination tucked away in a safe deposit box. He also admitted to a close friend of mine that he knew Lee Harvey Oswald. It has been reported that he showed up at Silvia Odio’s house in Dallas with Oswald. His list of connections included mafia dons Santo Trafficante and Carlos Marcello, who were both linked to the Kennedy assassination. Bernie took his secrets to the grave. His fall from grace wasn't poetic. It was, for the most part, his own fault. I am sorry for not reaching out to him in his later years. His death now haunts me.

After reporter Roben Farzad contacted me about rumors surrounding Bernie’s situation and subsequent death, I called the Miami-Dade coroner, who sent me the records. He was hit by a car last May while walking and then stayed for six months in hospice care before dying in December. I could only speculate about how he came to this tragic situation. Bernie spent lavishly money on his friends. He didn't save much. Many of the people closest to him had died or, like me, moved on with their lives.

I never again resorted to crime and gave up cocaine, thanks to Bernie.

Correction: An earlier version of this story misidentified the star of the The Man Who Shot Liberty Valance.
KEEP MIAMI NEW TIMES FREE... Since we started Miami New Times, it has been defined as the free, independent voice of Miami, and we'd like to keep it that way. With local media under siege, it's more important than ever for us to rally support behind funding our local journalism. You can help by participating in our "I Support" program, allowing us to keep offering readers access to our incisive coverage of local news, food and culture with no paywalls.
Make a one-time donation today for as little as $1.