Going Out in the Age of COVID? At Gramps, Get Ready for Plenty of Hand Sanitizer and Distancing

The staff at Gramps prepares for service for the first time since the shutdown. Photo by Olivia McAuley
Huddled around the bar for a pre-shift meeting on Tuesday evening, Adam Gersten, owner and operator of the popular Wynwood bar Gramps, summoned his scaled-down staff to go over a few things before service commenced.

It had been six months almost to the day since Gramps — along with every other bar, club, and other type of venue in Miami-Dade — was forced to shut its doors to the public on the order of state and local authorities. When Gramps reopened on Tuesday night, it was a tentative affair.

As the group shuffled into the indoor bar area — which remains off-limits to patrons — a quiet pessimism seemed to fill the air. It was already 7:30 p.m., and customers had only begun to arrive. With the 11 p.m. curfew still in place, the bar had about three hours before it was required by law to close.

"At this point, the people who have chosen to be out know how things are right now," Gersten told his staff. "But that doesn't mean we need to relax our standards."

Gersten then ran down a list of protocols in place to ensure proper hygiene.

Gramps' exterior wall is still tagged with "If Columbus goes, you go."
Photo by Olivia McAuley
Back in March, Gersten was ahead of the pack, shutting down Gramps before the City of Miami pushed through its emergency orders. Talking to New Times back then, he spoke emphatically about the lack of support and guidance business owners received from the city.

Six months later, nothing much has changed.

Last week, Miami-Dade County Mayor Carlos A. Giménez abruptly — albeit with a sharp elbow from Florida Gov. Ron DeSantis — announced that all bars and clubs in the county would be permitted to resume business at 50 percent capacity. The update to Giménez's New Normal Guide was met with relief from eager revelers. But for some, including bar owners like Gersten and Chris MacLeod of the Corner — the latter of whom has stated on Instagram that his bar will remain closed until the numbers show the pandemic is receding — the order provided little information about how the coming weeks will play out.

"I didn't think I would be working this year," says longtime Gramps bartender John Fernandes. "And I still might not."

Gersten nods in agreement, adding that he feels the inevitable outcome of bars and clubs reopening will be another closure by the end of this year.

"I didn't think I would be working this year — and I still might not."

Ultimately, he feels that the new order forces the hand of business owners. Simultaneously, it confirms that no more financial safety nets will be coming their way and gives a sense that if businesses don't open now and hope for the best, they never will.

Gramps' reopening was expedited when the Miami-Dade Democrats asked to host an official watch party at the bar for Tuesday's presidential debate, as they had done in the Before Times. The occasion seemed doubly fitting, in that Gersten has taken a central role in local activism during the pandemic — not only around the government's COVID-related actions but also around the Black Lives Matter movement.

About 100 people gathered at Gramps Tuesday night to watch the first presidential debate.
Photo by Olivia McAuley
"What are the two things you're not supposed to talk about at a bar?" Gersten asks Fernandes, who's busily prepping for drink orders.

Indeed, the idea that pubs and bars are supposed to be devoid of political discourse is a modern one. Historically, pubs were the focal points of local communities and acted as official venues for debates. Gersten seems to be embracing his platform as a local leader, using the bar's social-media channels to implore locals to register to vote and educate them on the candidates and giving talks alongside fellow small-business owners to call for relief for their industry.

The front of the bar serves as a reminder of the heavy lifting Gersten has engaged in since March. The phrase, "If Columbus goes, you go," is still scrawled in black graffiti on the bar's street-facing wall — an acrylically rendered criticism of Gersten's offer in June to help take down the Christopher Columbus statue downtown.

"Everyone understands the risks they are taking in leaving their house."

"Still need to frame that," he says absentmindedly.

Out on the back patio, groups of people have begun to file in. They take their seats in a civilized way, preparing to witness a historic event. Gramps has initiated table service, for the time being, the better to limit patrons' movements around the space.

Three young men wearing an assortment of merchandise paying tribute to Bernie Sanders, women in Congress, and Daniella Levine Cava, sit at a table sipping cocktails. They tell New Times they've been waiting for the debate because, as young Cubans, they're the ones the candidates must convince. When asked whether they have any reservations about going out to a bar, they say they've been going out for a while and aren't particularly concerned. 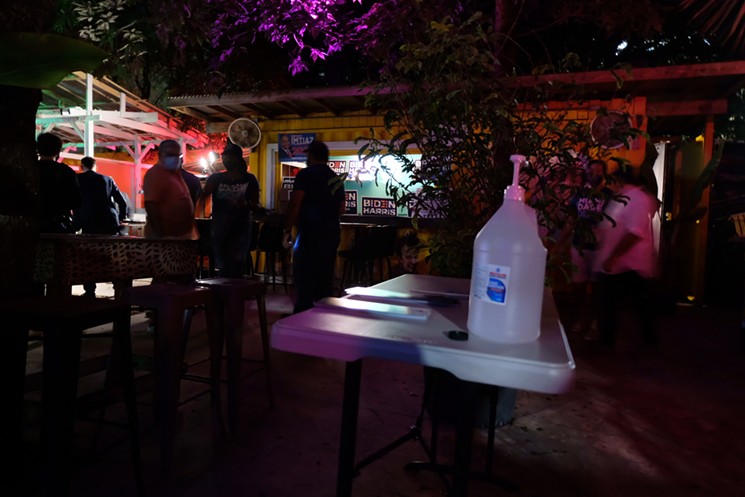 Get your hand sanitizer here.
Photo by Olivia McAuley
At the next table over, a young woman who declines to share her name agrees. She says she had COVID several weeks ago and has since tested positive for the antibodies.

Asked why she chose to come to Gramps to watch the debate, she responds, "Is that what this is?"

(That said, though the watch party is RSVP only, walkups were admitted for a short time.)

Attorney Steve Simeonidis, who chairs the Miami-Dade Democrats, says that while Gersten's record as "an amazing local activist and business owner... factored into our decision, we also trust Gramps to enforce social distancing and maintain a safe environment."

By the time the debate proceedings commence, 100 people have gathered on the outside patio, including two news crews that are reporting live on the event.

If it weren't for the scattering of oversize bottles of hand sanitizer and the mask-clad customers, you'd be forgiven for mistaking this for a regular Tuesday night. In many ways, Gramps' outdoor area, accented by colorful, well-spaced tables, seems to have been made for social distancing.

"Everyone understands the risks they are taking in leaving their house, and everyone has a sense of what is safe to them," Gersten says.

"I think we are in a good position to offer people a mitigated-risk situation," he adds. "I don't know if it gets much safer to be in a quasi-social environment than what we have here."

Gramps. 176 NW 24th St., Miami; 305-699-2669; gramps.com.
KEEP MIAMI NEW TIMES FREE... Since we started Miami New Times, it has been defined as the free, independent voice of Miami, and we'd like to keep it that way. With local media under siege, it's more important than ever for us to rally support behind funding our local journalism. You can help by participating in our "I Support" program, allowing us to keep offering readers access to our incisive coverage of local news, food and culture with no paywalls.
Make a one-time donation today for as little as $1.