Wayne Anderson is a marketing consultant who is bringing glamour back to Miami’s Historic Hampton House, which was once called “the Cotton Club of the South.” Photo courtesy of Antoinette Anderson
click to enlarge 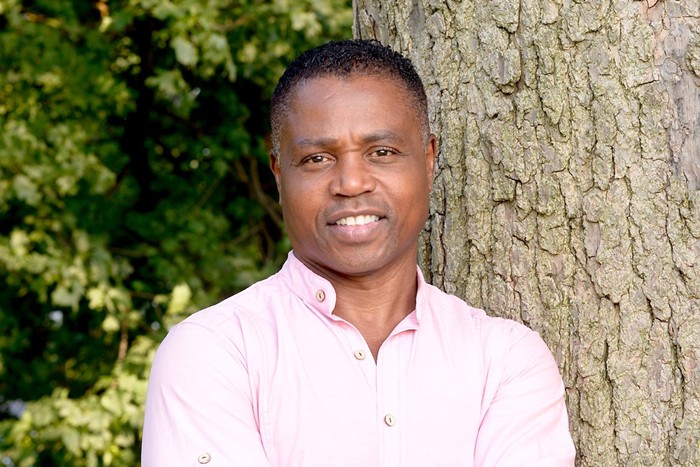 Wayne Anderson is a marketing consultant who is bringing glamour back to Miami’s Historic Hampton House, which was once called “the Cotton Club of the South.”
Photo courtesy of Antoinette Anderson
Wayne Anderson has made a career out of creating things of beauty and moments of magic.

He is a former college football player, restaurant owner and jewelry designer turned marketing and public relations consultant. Through the years, he has rubbed elbows with the rich and famous — his clients including celebrities, foundations, and sports teams.

Yet one of Anderson’s proudest accomplishments can be found in Miami’s Historic Hampton House, a former segregation-era motel on the edge of Liberty City. Earlier this year, Anderson helped transform the modest Civil Rights museum and cultural center on Northwest 27th Avenue into a place to see and be seen.

In March, he and marketing associate Curb Gardner launched the “From BeBop to HipHop” supper-concert series — a tribute to the Hampton House’s cultural past. The former motel was known for its all-night restaurant and jazz lounge, where leading Black entertainers once performed, including Josephine Baker, Duke Ellington, Nina Simone, and Sammy Davis Jr.


“We wanted to start by honoring what happened here,” Anderson says. “Some of the best talent in the world performed here, and some of the most famous people of that era stayed here. It was called ‘the Cotton Club of the South.’ We wanted to bring that vibe back. We wanted to wow people.”

The series debuted with Grammy-nominated singer-songwriter Eric Benét. A second concert, in May, featured legendary funk diva Chaka Khan. She opened her show with the ’60s hit, “To Sir With Love,” on a makeshift stage facing the smiling portraits of Martin Luther King Jr. and Nat King Cole, two of the Hampton House’s past famous guests.

The sold-out shows brought ticketholders dressed to the nines to the former “Green Book” motel, which had welcomed civil-rights leaders and other Black travelers and celebrities during Miami’s Jim Crow years.

The Hampton House is working on four more concerts for this year, soon to be announced, Anderson says.

Prices have been kept affordable thanks to sponsors, he added. They have ranged from $110-$150 per person. Sponsors also allowed the Hampton House to donate tickets to neighborhood youngsters from underprivileged households.


“For the first show, we probably gave away ten tickets to children that came from challenging backgrounds,” Anderson says.

This wasn’t the first time Anderson has tried to create magic for needy youngsters.

In 2018, he hooked up with the Friends of Jaclyn Foundation to invite children with brain tumors and their families to Madison Square Garden, as special guests of the New York Knicks basketball team.

“Part of the reason that I do work with foundations is that I consider myself lucky, even privileged, because of the relationships that I have been afforded,” Anderson says. “I’m the son of immigrants, and we came here to have a better life. Now it’s about giving back.”

Anderson came to the United States from Jamaica at age 10, settling with his family in White Plains, New York. Growing up, he watched his parents work hard for their children. His main inspiration was his mother, who cleaned homes while earning her degree as a registered nurse.

“Like most immigrant parents, they sacrificed for their kids, so we could get an American education and have a brighter future,” he says.

Anderson’s brighter future led him to the University at Albany, State University of New York, where he played college football and twice made the All-America Team. After graduating with a major in marketing and economics, he tried out for the Miami Dolphins. He didn’t make the team, but he fell in love with the city. “I always knew I would come back here,” he says.

Anderson moved to Miami two years ago, just before New York became the epicenter of the coronavirus pandemic.

“I was seeing a trend [of New Yorkers moving to Florida], and I wanted to be a part of it,” he says.

He learned of the Hampton House from a friend who had recently visited it. “I’m embarrassed to say that I had never heard about it,” he says, “and I consider myself a pretty hip person.”

Anderson booked a Hampton House tour in August 2020. By then, word was out that the historic gem would be featured in a new Hollywood film, One Night in Miami, which was released the following December. The movie, available on Amazon Prime, tells a fictional account of a 1964 encounter between four of the Hampton House’s famous guests: Malcolm X, Muhammad Ali (then Cassius Clay), Jim Brown, and Sam Cooke.

After his tour, Anderson spent two hours discussing the Hampton House’s future with its directors.

“They wanted to leverage the media attention they knew that was coming their way from the movie,” Anderson recalls. “When I went back a second time, I told them: That’s fine, but you guys are far more than just trying to take advantage of a moment. There’s history here, things people are going to have a real strong interest in. No differently than I did because I was completely ignorant about your existence.

“And you think about this rich history, the people who came here, from Martin Luther King to Muhammad Ali. You can’t make that up.”

Jacqui Colyer, chairperson of the Hampton House board, recalls that conversation and the skills Anderson has brought to the table — from reviving the venue’s supper club to redesigning its website and working on other projects that include a permanent “Green Book” exhibit.

“He’s accelerated our trajectory, our growth, in a way that we didn’t know how to do, especially during a pandemic,” Colyer says. “He set out a roadmap for us.”

Colyer and Anderson have a running joke about the first time she met him, a moment she later described as “when the Pope walked in with slippers... and I knew we were going to be saved.”

During that first encounter, Anderson was wearing a pair of low-cut, gray designer sneakers. “They were the most gorgeous shoes I had ever seen.... It reminded me of what the Pope wears,” Colyer recalls.

In her view, Anderson has pulled off a small miracle — taking a former Jim Crow-era motel in a historic Black neighborhood and placing it on Miami’s cultural A-list.