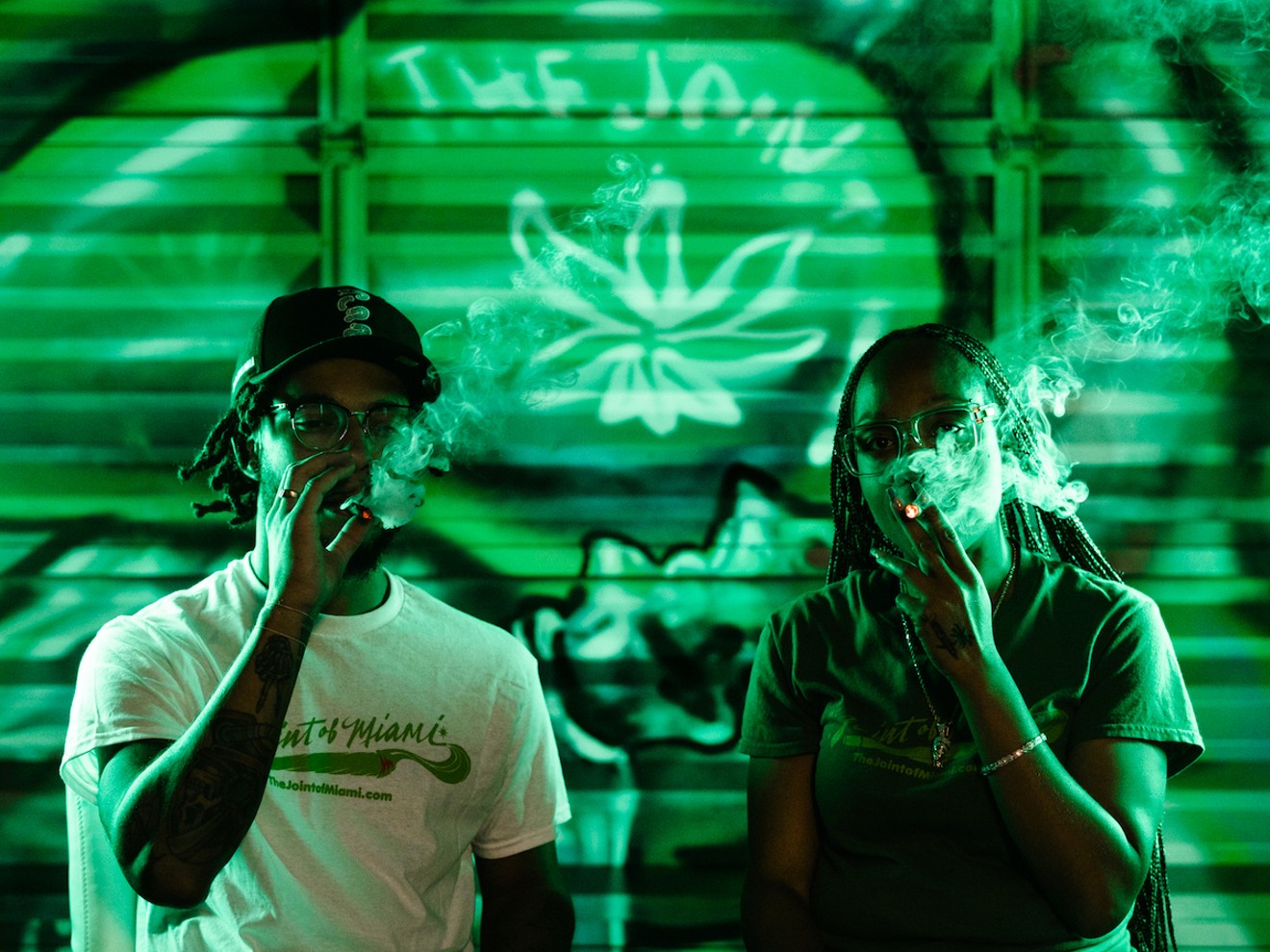 King Forchion (left) and Essence Self Photo by Karli Evans
The Joint of Miami's interior walls are adorned with psychedelic, pop culture-inspired art. A large blue velvet couch in front of a bizarre Mickey Mouse mural — depicting the Disney mascot with boobs and a gold pyramid for a head holding a joint whose smoke spells out the words "Stay Lifted" — occupies the cozy bar and lounge area. The venue markets itself as Wynwood's first marijuana-themed lounge.

King Forchion, the Joint of Miami's 24-year-old CEO, sits upright on the couch alongside his 34-year-old cousin and business partner, Essence Self, who coolly sparks a blunt for herself in the same way a matriarch would pour wine into a glass. The slight generational gap between the two is brought to light as they reminisce about days past, each of them taking turns at the wheel as they navigate through rose-tinted nostalgia.

“Everybody calls me the grandma — the old soul, the old one,” Essence says jokingly.

In between memories, they often find themselves referencing NJWeedman, AKA Robert Edward "Ed" Forchion Jr.

King usually calls him "Dad," and for Essence, he's "Uncle Robby." In conversation, they occasionally refer to him by his moniker out of respect. A pious marijuana legalization activist for decades, the New Jersey native gained notoriety through countless interviews, political campaigns, and weed-related business ventures. The Joint of Miami is simply an extension of the last. 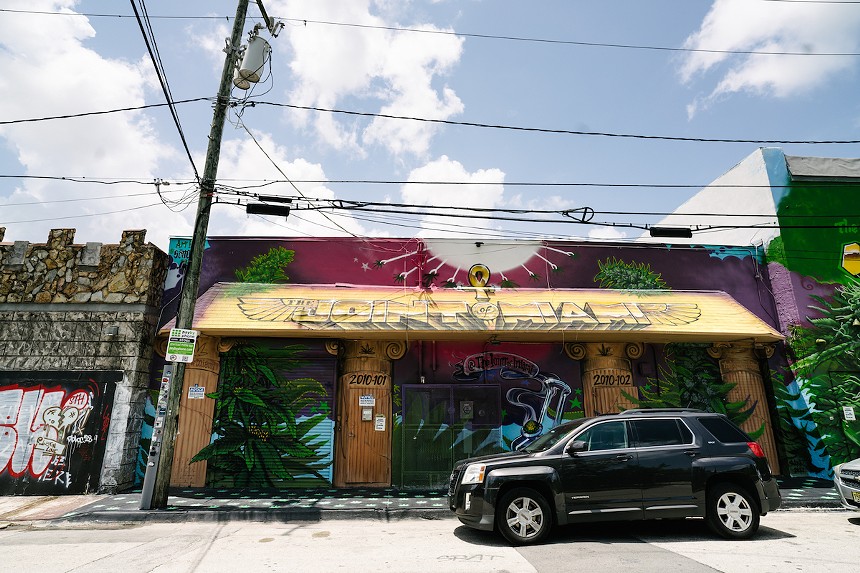 The Joint of Miami is an extension of NJWeedman's New Jersey business ventures.
Photo by Karli Evans
When they were teens living in South Jersey, King and Essence recall hearing about NJWeedman through friends, friends' parents, and teachers — often as if he were some sort of mythical figure. For better or worse, his reputation seeped into the public perception of his family.

“Everybody sees that it’s cool, it’s great what he’s doing, but we were also taking a hit for it too,” King reflects.

“Especially anybody with the last name Forchion," Essence adds. "They automatically assume, ‘Aw, they got a pound of weed on 'em!’”

Last year, Ed experienced an epiphany during an impromptu excursion to Miami's art district. Deeply inspired by the allure of his surroundings, he turned a warehouse in Wynwood into ground zero for his sequel to NJWeedman's Joint, which is located in Trenton, New Jersey's capital. When the Joint of Miami opened in July of 2021, Ed handed King the keys to the castle. A year later, the Forchion family has done more than merely pioneer an outlet for cannabis in a new market; they've built a much-needed epicenter for the celebration of Black art and music.

Tucked amid South Florida's teeming cluster of prismatic EDM clubs and unending Latin dance nights, the Joint of Miami is a free-spirited outlier. As most venues make their bread off of DJ sets and 21-and-over crowds, the Joint caters to a separate clientele of stoners and young underground rap fiends through live concerts and events. 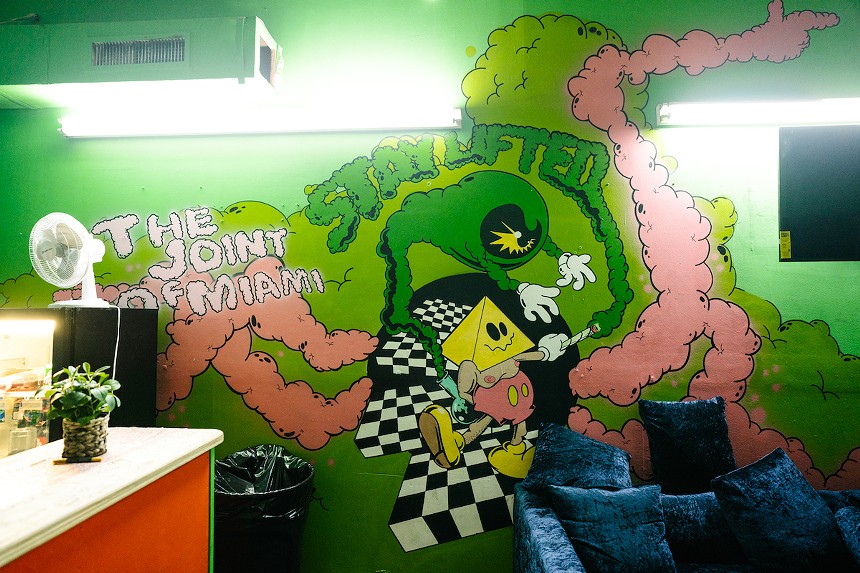 Outside of local strip clubs, the Joint of Miami has become ground zero for hip-hop in the city.
Photo by Karli Evans
“You don’t get hip-hop around here unless you’re at a strip club, bro," King asserts. "If you got a girl and your girl don’t want to go, you not going to a strip club. If you don’t have a couple hundred to spend at a strip club, you’re not going.”

He has a point.

Miami has long been missing a dedicated axis for all things hip-hop. Together with Essence, King has turned a safe space for Miami potheads into a hotbed for the next generation of internet-bred rap stars. In-demand upstarts like BabyTron, Autumn! and Destroy Lonely have rocked the stage at the Joint in the past three months.

But King and Essence emphasize that the Joint's appeal doesn't stop at hip-hop. From Wednesday to Sunday, the venue hosts everything from comedy open mics to Caribbean music nights to art markets to live jazz. The pair places value in versatility and catering to different types of people with similar roots to theirs. 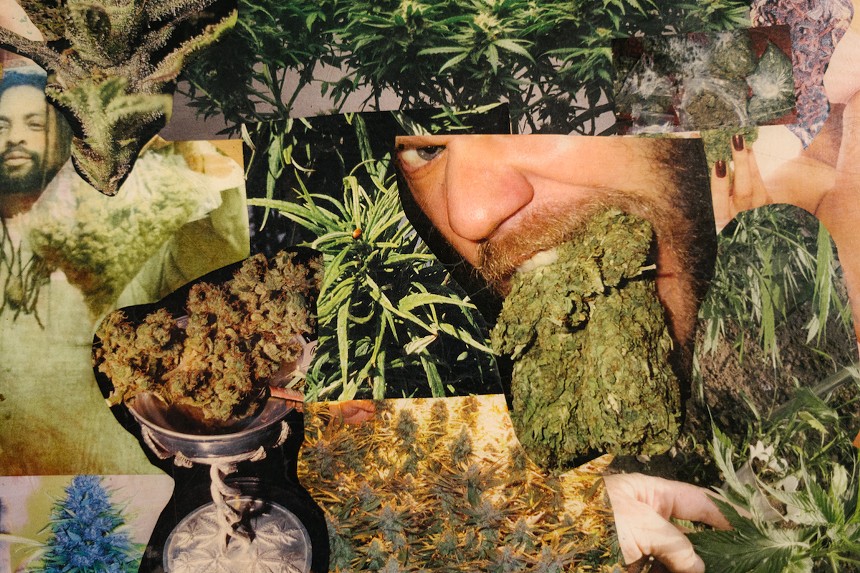 A weed-heavy photo collage decorates the Joint of Miami's walls.
Photo by Karli Evans
"Kinfolk, you know what I mean?" King says of the Joint's target audience. "We’re not Latin, we’re not Spanish. There’s too much around here to cater to that. There’s not enough of this. We wanted to fill the niche of the hip-hop world.”

The performance area beyond the lounge is vast and made vibrant by colorful light displays above the stage. The space is made even wider with a connecting outdoor patio equipped with a food truck aptly dubbed the Munchie Mobile. King credits the production teams the Joint works with for tapping them into high-caliber talent, which in turn brings out the best in the crowds they pull.

The Joint's emergence as Miami's main attraction for hip-hop was more of a natural progression than something wholly intentional. As King traces back the family's musical ambitions for the venue, Essence playfully interjects in a way only a big cousin could get away with.

“Well, no, no, no. Let’s start from the beginning, sir," she chimes. "We came down here thinking we were gonna be a juice bar, which then turned into Latin nights, hip-hop nights, and where we are today. It evolved from [King] buying the slushie machine maker thing into a completely different world.”

"We wanted to fill the niche of the hip-hop world," says King.
Photo by Karli Evans
And it's a world they both welcome with open arms. Despite having to metamorphose a couple of times since the Joint's inception, Essence notes that they've been fortunate not to encounter any major obstacles in their journey up to now. The lack of static from law enforcement in a state where recreational weed has yet to be legalized has been a blessing.

Even as she laughs about being way out of the loop with the new-age rappers the club hosts, there's a mutual sense of gratitude between her and King about building the platform they have, all while fully embracing cannabis culture.

Literally and figuratively, it's in their blood.
KEEP MIAMI NEW TIMES FREE... Since we started Miami New Times, it has been defined as the free, independent voice of Miami, and we'd like to keep it that way. With local media under siege, it's more important than ever for us to rally support behind funding our local journalism. You can help by participating in our "I Support" program, allowing us to keep offering readers access to our incisive coverage of local news, food and culture with no paywalls.
Make a one-time donation today for as little as $1.
Olivier Lafontant is an intern for Miami New Times. He's pursuing a bachelor's in digital journalism at Florida International University. He specializes in music writing and photography and got his start as a writer for South Florida Media Network in 2021.
Contact: Olivier Lafontant
Follow:
Twitter: @oliviersaidhi
Instagram: @oliviersaidhi