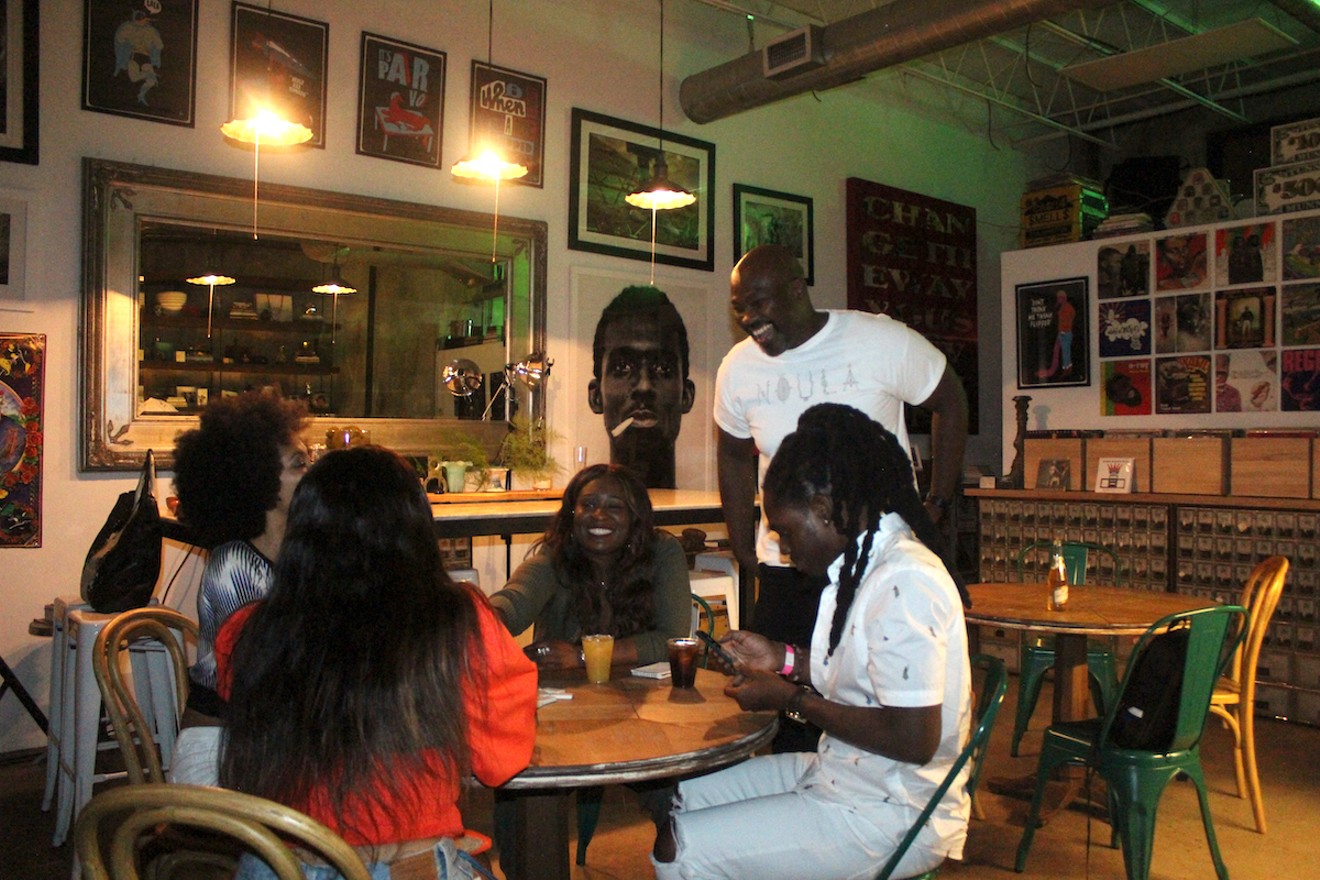 Max Pierre is an affable host at SimplyGood Miami. Photo by Jesse Fraga
Silver lamps dangle above the cozy, dimly lit space. The industrial cement walls are lined with record sleeves from the Grateful Dead to A Tribe Called Quest. The aroma of New York-style pizza blends naturally with the warm, homey furniture and patrons gathered at SimplyGood Miami.

The man behind the space is Max Pierre, who cultivated his New York City roots and love for hip-hop into an incubator for local creatives.

"I started a pizza shop because I would make pizza for kids on the block. They'd call me pizza man," Pierre says. "Then I was like hip-hop is my culture. Let me just create a space where I can do all the things that I like and see how people interact with it."

The 48 year old owns more than 30,000 records, too many to sell in the shop. Instead, it evolved into a one-stop shop for vinyl, merch, drinks, pizza, and entertainment.

Walk in, and to your left is a rack of T-shirts for sale; to your right is a bar and record table. Just want to hang out? There are tables for groups, quiet cushioned chairs toward the back, and even stacks of extra chairs.

"I started inviting friends over; then it started morphing into what felt right for the community," Pierre says. "You can have a family dinner, play movies for the kids while the adults sit around and play dominos, work during the day over coffee. It's a home away from home." SimplyGood hosts a pop-up of Queens-based vinyl shop Scorpion Records.
Photo by Jesse Fraga
K. Foxx, the midday DJ at 99 Jamz and Pierre's longtime friend, walks into the shop while Pierre is speaking with New Times. She brought some friends after hours "to keep the night going." Without hesitation, Foxx goes straight for the turntables, spinning heavy-bass hip-hop. Pierre puffs on a cigarette as he greets everyone with drinks. It's practically an automatic custom.

"Max is the most progressive, innovative man that I have ever known. I mean that — he really is," Foxx says, noting the 15-year friendship. "I remember I had the most legendary birthday party here. My boy Pleasure P came through, and we had a dance-off. It's always a vibe."

The cultural hub opened about five years ago as one of Little River's first businesses before its recent emergence into an arts district.

"We're OGs, man. It's part of the community, minus the shiny things that are starting to happen," Pierre says, pointing to the growth of corporate businesses across the city. "One day, people will wake up and realize shit is changing."

His Haitian parents raised him in New York City before he moved to Miami around age 28 to pursue entertainment and hospitality. He founded the street-savvy clothing shop Arrive as well as the gallery AE District and marketed for the Opium Group as David Grutman's first-ever hire.

In proper Miami custom, the menu at SimplyGood incorporates a classic combo: guava y queso, but make it pizza. Other pies include cheese, Margherita, pepperoni, breakfast, meat lovers, and mushroom and truffle. "I feel like these worlds of fashion and music are always linear," Cabrera says.

Pierre and Cabrera first met while working at Arrive in Miami Beach.

The name Scorpion Records is rooted in culture. Before the record shop took over the space, Trice lived next door to the original Scorpion Cafe. The owner, a kindhearted, elderly Romanian woman, offered Trice the lease amid the pandemic.

"It was a Romanian dive bar, very underground, probably the only bar in New York you could smoke cigarettes in," Trice says. "The bar shared a wall with my apartment, so I could hear the music playing pretty much all night."

Authentic Romanian dishes like cabbage rolls and polenta were served for free daily. Inebriated fights between patrons were expected. Photo by Jesse Fraga
"Every night, she'd serve free Romanian dishes," Trice says. "The reason she would feed people was so they wouldn't get so drunk."

When the trio took over the space, it simply placed the word "Records" over "Cafe" to save a few bucks on what would've been a new awning. Thus, Scorpion Records was born.

After Scorpion gained traction in the northeast, they decided to merge the two brands.

"Music is involved in everything culturally related, no matter where you come from," Pierre says. "It's what we all connect with."

Primary Project cofounder Chris Oh, who died in 2017, previously owned the space occupied by SimplyGood. The pair were good friends and met through a mutual appreciation of the arts.

"This was his studio — God rest his soul," Pierre says. "When he passed, I just personally wanted to keep his legacy going, so I took this space."

Both Scorpion and SimplyGood hope to preserve the history of local talent and culture through comedy shows, jazz nights, flea markets, and, soon, domino nights.

"There's this idea of what Miami is, but for me, it's a certain level of authenticity that can't be replicated," Pierre says. "When you walk into the original Scorpion Records in NYC or SimplyGood here in Miami, it's special because you can feel it. It's not some gimmick."

SimplyGood Miami. 212 NW 73rd St., Miami; 786-618-5905; instagram.com/simplygoodmiami.
KEEP MIAMI NEW TIMES FREE... Since we started Miami New Times, it has been defined as the free, independent voice of Miami, and we'd like to keep it that way. With local media under siege, it's more important than ever for us to rally support behind funding our local journalism. You can help by participating in our "I Support" program, allowing us to keep offering readers access to our incisive coverage of local news, food and culture with no paywalls.
Make a one-time donation today for as little as $1.