Paul McCartney plays the hits at American Airlines Arena. See more photos from McCartney's Miami show here. Photo by Karli Evans
The sold-out crowd at American Airlines Arena was old – not geriatric, but certainly approaching retirement age. Younger faces could be seen throughout the audience, from children and young adults to professionals in their 30s and 40s, but make no mistake, the gray-haired, t-shirted Baby Boomers were out in fullest force.

This is the audience Paul McCartney, himself 75, has been performing for since 1963. He knows exactly what they want, and he’s the first to admit it.

“We can tell which songs you like the most,” he said in between songs. “When we play a Beatles song, the place lights up like a galaxy with all the phones. When we play a new song it’s like a black hole.”

Complains aside, the rock star happily obliged his fans as he and his band ripped through a 33-song set – 38 with encore – that began with “A Hard Day’s Night” and ended with (what else?) “The End.” Cherry-picking his lengthy career for greatest hits and under-heard favorites, the show split the difference between “old songs, new songs and in-between song,” filling the gaps with stories from his time hanging with other rock icons. All 60-odd years of his career were represented, as he played both the first song ever recorded by the Beatles – “There was five of us at that time…it cost us five pounds, a pound each” – as well as his latest song, the Kanye West and Rihanna collab “FourFiveSeconds” (Ye and Riri, sadly, did not appear). He also took time to dedicate songs to the three other members of the Beatles – Ringo got “Birthday” in celebration of his 77th – producer George Martin, McCartney’s wife Nancy, and even the Rolling Stones. “This idea of a rivalry,” he said of the band, “it’s a fake thing. Fake news!” 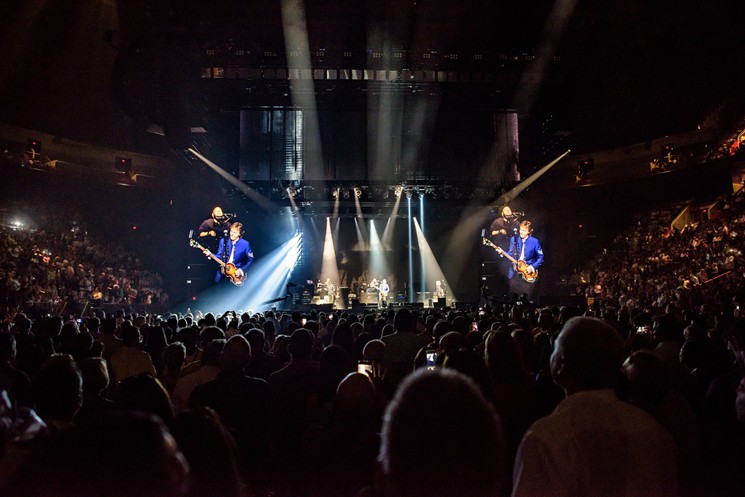 See more photos from McCartney's Miami show here.
Photo by Karli Evans
It would be one thing to see Paul McCartney perform in person, but the concert at the AAA was supplemented by a barrage of incredible special effects. Lights and video screens would move in and out of place. Nostalgic numbers like “Maybe I’m Amazed” got photo-album videos while more thematic tracks were accompanied by dazzling, even psychedelic visuals. In one segment of the show that included early material, the band moved to the front of the stage underneath a group of screens imitating a bayou shanty. In another, as the band took a break, McCartney performed “Blackbird” and “Here Today” solo atop a raised platform covered in LED screens showing footage of waterfalls. By the time they unleashed the pyrotechnics for “Live and Let Die,” I had seen enough lasers and multicolored lights to last through the next five Star Wars films.

Then there’s the man himself, switching between instruments at will and remaining onstage for over two hours. McCartney’s energy is as formidable as his electrifying stage presence. He’s a man that has performed in stadiums for most of his life, and knows it. He’s probably given every anecdote a hundred times, but he doesn’t care because it makes us happy. Sauntering across the stage, raising his guitar above his head, he epitomizes the phrases “crowdpleaser” and “still got it” in equal measure.

Maybe it’s this undeniable verve that made the show such a hit. Maybe it’s the fact that so many music fans have a connection to the Beatles that we can’t help but find something to like in the incredibly varied performance. I wouldn’t call Paul McCartney’s latest South Florida appearance a perfect show – he could stand to trim a few songs from the set – but it was damn close. And I know because what gave me hearing damage last night wasn’t the bang of the fireworks or the crash of the drums: it was the cheering crowd, young and old (but mostly old), screaming for an encore.