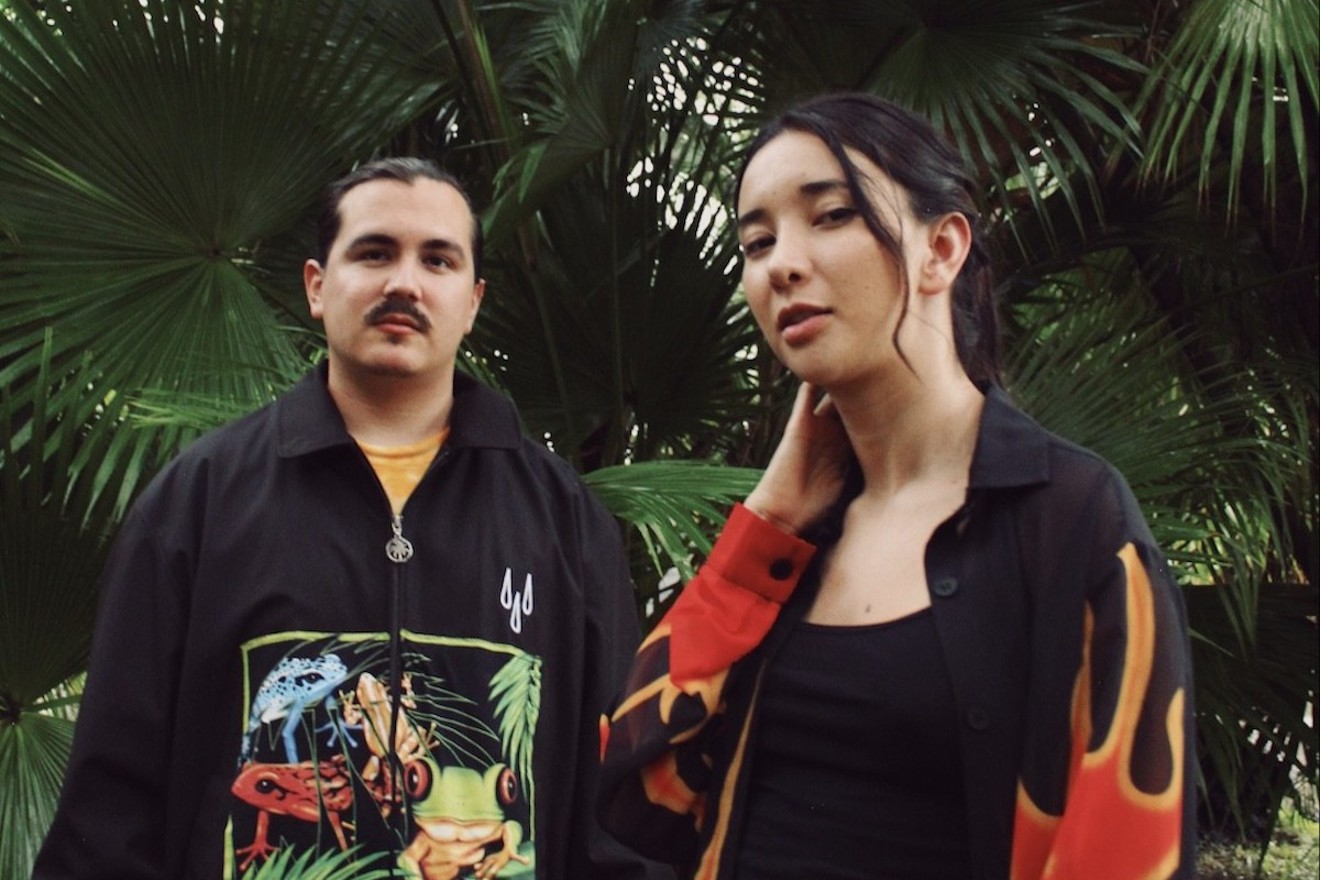 Nick León (left) and Bitter Babe Photo by Luca Medici
On Fuego Clandestino, Bitter Babe (AKA Laura Solarte) and Nick León have created a soundscape looking to the future of reggaeton. Reinventing the music heard on the streets of Colombia, León and Solarte push reggaeton to its industrial extremes with a five-track EP fitting for 2050.

Tra Tra Trax is known for pushing for Latin artists and a range of sounds, including dembow, reggaeton, cumbia, guaracha.

“Basically, the sounds we grew up with,” Solarte says.

When the label approached her for artist suggestions for its next release, Solarte jumped at the opportunity to debut her project, Bitter Babe. She'd been producing beats and tracks for a while, but Fuego Clandestino marks her first proper release.

“I am a blend of different styles, but I wasn't comfortable coming out with something that would give me this tag,” Solarte says.

Releasing music under the post-reggaeton subgenre aligns with Solarte's South American roots while giving her the freedom post-genre acts crave.

“For me, this just made more sense than releasing something for the first time that is more obvious electronic or techno," she says.

Also making sense to Solarte was collaborating with Colombian-American producer Nick León. Over the past four years, León has made a name for himself in the Miami electronic music scene for his Latin-inspired experimental sound and his label Space Tapes.
Similarly, Solarte has been DJ'ing under the Bitter Babe moniker since 2013, first as a resident DJ at a Colombian club and eventually gigging around places like Mexico and Panama. Still, despite the success behind the decks, something didn't sit well with Solarte.

“I wasn’t really sure what I was doing. It just happened too fast for me. I didn't have the time to craft my art,” she admits.

Hoping to sharpen her craft, she moved to Berlin to experience new sounds but found the city a bit overwhelming for someone trying to find their own style. At the end of 2018, she decamped to Miami to visit her sister and figure out her next move.

While browsing on SoundCloud, Solarte stumbled upon an ambient project with the cities of Cali, Colombia, and Miami highlighted in the bio. Having grown up in Cali and Bogotá, she immediately messaged the account.

A few months later, at a party in North Miami Beach, she and León met IRL, with neither aware of their previous interaction online. Their mutual adoration of reggaeton pushed the two to start collaborating. Then, at the start of the global pandemic, Solarte quickly returned to Colombia.

The EP is a child of quarantine, León says. Via email and text, the project came together in two-and-a-half months.

With reggaeton's ascent into mainstream culture, Fuego Clandestino points to where the genre can go next. Blending with underground electronic sounds, the post-reggeaton movement is still in its infancy — but no less exciting to watch as it coalesces.
KEEP MIAMI NEW TIMES FREE... Since we started Miami New Times, it has been defined as the free, independent voice of Miami, and we'd like to keep it that way. With local media under siege, it's more important than ever for us to rally support behind funding our local journalism. You can help by participating in our "I Support" program, allowing us to keep offering readers access to our incisive coverage of local news, food and culture with no paywalls.
Make a one-time donation today for as little as $1.